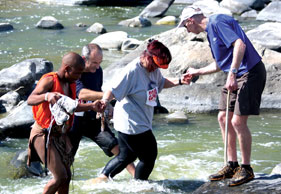 South Africa’s oldest foot race was recently held in KwaZulu-Natal. The Fugitives’ Trail follows the exact route taken by the defeated British soldiers who fled the slaughter at the battle of Isandlwana in 1879. The trail traverses magnificent game-filled bushveld before crossing the Mzinyathi River at Fugitives’ Drift and finishing high above the dramatically beautiful Mzinyathi River Gorge, at the present day Fugitives’ Drift Lodge. – BY IAIN MORSHEAD

THE HISTORY
On 22 January 1979 a force of 20 000 Zulu warriors tore into a British force of 2 000 soldiers at Isandlwana. The red coats faced a stark choice: stand and face certain death, or try to escape along what was to become known as the Fugitives’ Trail. Today this trail honours the brave soldiers and warriors who fought and died here 131 years ago.

THE ROUTE
Due to the remoteness of the trail and in order to retain the pristine nature of the trail, runners had to bring their own water bottle or bladder and ensure they take out whatever they took in, so littering is not an option.

Starting on the slopes of Isandlwana, internationally acclaimed battlefield guide Rob Caskie set the scene before sending the fugitives and pursuers on their way across broken ground towards the Mzinyathi River.

The trail passed many whitewashed cairns, each a poignant reminder of a life lost on that fateful day. Plunging down a rocky slope the path turned to cross the Manzimnyana River.

Enveloped in the beauty of the magnificent KZN bushveld, the path was technical and difficult. A challenging climb up Impete Hill was followed by a steep descent down to the Mzinyathi (Buffalo) River. There were no physical reminders of the brave Zulu warriors who perished here, but their presence was everywhere. Raw courage, leather shields and steel versus heavy 45 calibre bullets.

Crossing the Mzinyathi River at Fugitives Drift, participants had to wade across a waist-deep river under the care of qualified lifesavers. On 22 January 1879 the river was flooded, and some soldiers chose to face cold steel rather than plunge into the raging water.

The steep rocky path out of the Mzinyathi Gorge passed the Memorial to Melvill and Coghill who died here in a valiant attempt to save the Queen’s Colour of the First Battalion of the 24th Regiment. History tells us how they dragged each other up this slope in a vain attempt to shake off their pursuers. Both were posthumously awarded the Victoria Cross for their bravery (the first ever posthumous award of this decoration).

The steep climb continued before the trail turned to present magnificent views of Isandlwana and the Mzinyathi Gorge.

YOUNG BLOOD
Spurred by the memory of Maritzburg College old boys who lost their lives on the trail, Maritzburg College athletes James Speed (15) and Jonty Fredrik (17) dominated the early stages across treacherous terrain with a fine display of courageous running.

After 9km of running nose to tail, it was James who splashed across the Umzinyathi River first with Trevor Toerien (44), a multiple South-African cross-country champion, wedged between him and Jonty. Toerien used his legendary trail running prowess to pull away from James on the steep climb past the graves of Melvill and Coghill.

EXPERIENCE WINS THE DAY
Trevor broke the tape some two minutes ahead of James with Jonty a few minutes further back. James and Jonty were first and second in the junior category with plucky Connor Mercer (12) in third place. Jeff Speed (50) of Hilton Harriers dominated the masters race and Tollie Bibb (67), a visitor from the USA, was the first grand master.

However it was 71-year-old Margaret Marshall who stole the day as she gracefully won the great grand masters category, finishing together with her husband Barry and daughters Debbie and Cheryl.

It was a day and a race that left nobody unmoved. The race created and sponsored by HoneyGuides Recruitment, aims to bring South Africans together to celebrate our unity by remembering our past.

Interesting Facts
Johnny Clegg’s song Impi was written about the battle of Isandlwana and the Fugitives’ Trail.
None of the 800 redcoats who went into action at Isandlwana survived the battle (Many soldiers were superstitious about the shape of Isandlwana, as it closely resembled the Sphinx on their regimental badge).
A partial eclipse of the sun occurred at the height of the battle.