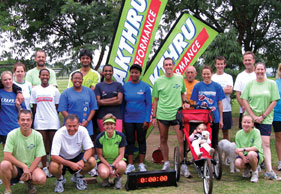 You could say that this is a club with one running foot in Pretoria and one in Johannesburg! Breakthru Midrand Striders is situated in one of the most rapidly growing areas in Central Gauteng, making it one of the fastest growing clubs in the region. – BY MICHELLE PIETERS

Anyone who has ever driven in Midrand at any time of the day will know this hotspot area, its traffic congestion, road works and the huge amount of development over the last couple of years. Therefore it is no surprise that a running club in this area would bloom!

Over the years Breakthru Midrand Striders has grown to over 200 members and today the club is still attracting new members on a weekly basis, partly due to hard work from its club members promoting it and partly due to the huge influx of new residents and business people in the area. “While out on our club runs on Sundays we often get stopped by motorists enquiring whether we belong to a running club and how they could join,” says Sharon Pyle, Licensing Officer and Club Member of the Year at Breakthru Midrand Striders.

A SMALL START
Like all successful running clubs, it initially started out with only a handful of members and a lot of passion for the sport. Breakthru Midrand Striders was started when two founding members and running buddies, Chris Meares and Steve Mann, felt the need for a club in their area and so in 1980 Midrand Country Striders was formed. Over the years, it changed its name slightly to allow for new sponsors. Today the well-known sports supplement, Breakthru, is the title sponsor of the club.

The club has always had a social atmosphere, as its founding principles imply: fitness, friendship and fun. “Most members socialised in the clubhouse on a Friday night and left straight from there to go run a race on the Saturday morning,” chuckles Sharon.

The first clubhouse was situated at the Swiss Club in Moerdyk Road, Vorna Valley, but was later moved to Midrand High School in Halfway Gardens before recently relocating back to the Swiss Club. It is an ideal setting for a running club with a great social environment for a couple of cold ones after a run!

SOMETHING FOR EVERYONE
Over the years the club has stayed true to its founding principles. “We don’t want to move away from getting fit while having fun and building friendships, even though the club is fast growing. We want everyone to feel at home,” says Duane Newman, Club Chairman.

The club has been working very hard on changing its image of being too Comrades focused. “As with many clubs in the 80s, Midrand Striders focused on Comrades runners and their training, but now we are trying to include all our members, from the social runners to the more experienced ones. Many people are hesitant joining a running club as they feel they are not fast enough and will get left behind. We want to encourage these people to join our club,” says Duane.

Therefore no one ever gets left behind or feels left out at the club’s time trials or Sunday club runs. “Our club runs are not run from garage to garage. We have club members volunteering and stopping in their cars every 3km to hand out water, Coke and biscuits. They will wait for the last people, no matter how slow they are,” says Sharon.

Soon the club will introduce a Thursday tempo run where runners of all abilities can take part around a 1km loop, all finishing at a central point. “We don’t want anyone to feel threatened by long distance runners and this will help everybody to stay connected.”

This does not mean that the club does not look after their Comrades runners. These long distance junkies still get treated to a superbly-organised 60km long run where club members set up watering tables so divine, it took one member longer than eight hours to complete the long run this year. His excuse: he had to taste all the goodies at the watering tables and of course, make use of the massage on offer at one of the watering points.

And then of course there are the fun teams that Comrades runners get divided into: Wally’s Plodders, Bruce’s Babes and so on are a few of the team names. The total time of team members (from different abilities) get added up and the fastest team wins the prize. And when you have completed ten Comrades, you get your very own walking stick with your name engraved on it.

HAPPY SOCIALITES
One thing most members have in common is their love for socialising! The club was only considered competitive in 2007 when a group of runners from the former Liberty Life Athletic Club joined Breakthru Midrand Striders. Unfortunately the sponsorship for an amateur structure proved to be quite a costly affair and it was concluded after two years.

Today the club focuses on total inclusion and drives a development programme for underprivileged runners. “This is for members without a job and for those who are really struggling. The only payment is that you give time back to the club.” Most members are happy to do so and volunteer when needed.

Once a month the club chooses a race to take part in and club members serve up a delicious mini-breakfast after the run. “Because Midrand is so central we alternate between monthly races in Pretoria and Johannesburg. Technically we are a Central Gauteng club, but we are situated only ten minutes from Centurion. We even have a couple of members who live in Centurion,” says Duane.

RACES
The club presents the annual Breakthru Midrand 15km and TIS 5km fun run in July each year. The race saw more than 1 500 runners and walkers bracing the cold this year to take on some of Midrand’s toughest hills!

Club members are very proud of their course, which has one of the toughest hills in Central Gauteng. Northfolk Road has reduced many runners to a walk up this incredibly steep hill. The hill starts at around the 12km mark and lasts for about 2km! But you do get rewarded once you reach the top; a Breakthru Midrand Striders member welcomes runners with the sounds of a bagpipe.

TIS co-sponsored the 5km fun run this year and it was a huge success. “We had over 400 entries for the fun run and it was great to see kids, walkers and non-runners just have fun. With this fun run we aim to get non-runners interested and involved in the sport.”

“Putting on a race is hard! We don’t do it for the money, but rather as a way of giving back to the sporting community,” says Duane.

SAVE THE BULLFROG
The club supports Midrand’s ‘Save the Bullfrog’ campaign. The African bullfrog – an inhabitant of the Glen Austin pan in Midrand – has been listed as a near–threatened species.

A portion of the money made from the club’s annual race goes towards the campaign. The club even has its very own ‘Save the Bullfrog’ mascot!

CHALLENGES
Getting to social functions and time trials at this Midrand club does sometimes prove to be a challenge because of the traffic in the area. “Though we have a big footprint our members – a combination of people who live and work in Midrand – sometimes battle to get to the club. Midrand’s accessibility during the week is a problem therefore we struggle to maintain social functions during the week. People attending the time trials on Tuesday evenings and week functions are usually the ones working in Midrand, and those attending the club runs on weekends are usually the ones living in Midrand,” says Sharon.

It is mainly for this reason that no organised morning club runs are on offer. Club members who stay close to each other informally get together and train together.

If you live or work in the Midrand area and are looking for a great bunch of like–minded individuals to share your training with, give the club a call. It might be just what you need to inspire yourself to reach your goals.