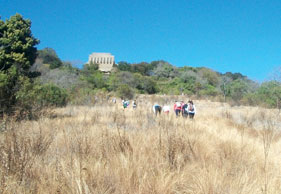 The Dinamika Springbok Vasbyt is a tough trail run with a special tradition that takes place at the historical Voortrekker Monument in Pretoria. Many runners regard this run as one of the toughest off road runs on the running calendar. This year the race lived up to everything it promised and much more! Modern Athlete reader Johann du Plessis shares his race day experience.

The morning started off very cold; by the time we left home it was -3? C and an icy wind was blowing. Race organisers promised a bagpipe player, a plane flyover and a canon at the start. Boy, did they deliver! The race lived up to everything it promised. It was an experience from start to finish.

This race commemorates the Springbok Soldiers of South Africa’s past. Before the start five bagpipe players entertained runners while four planes flew over followed by the last flying Puma of the SA Air Force. A minute of silence was then observed and this was followed by a huge blast from a canon. We were off, running a race that was special before we even crossed the start.

The route was a combination of road and trail running, with the first part being fairly easy. For a while I foolishly thought the race was maybe not as hard as advertised. There were a few climbs but nothing serious and the first half was fairly easy with no technical trails, mostly tar and gravel roads. But then the fun started. With about 7km to go the race suddenly lived up to its reputation as being one of the toughest races around. The first major climb was up Fort Schanskop and though it was tough, we were rewarded with running through the Fort. This was turning out to be a really special race.

The descent back to the Voortrekker Monument was steep and in some places I could feel my quads complaining! Another sting in the tail awaited us at roughly the 1.5km to go mark as we had to make our way up another hill. We then ran past the South African Defence Force Wall of Remembrance and I took some time there, remembering some of my own friends who fell when we were in the army.

Finally we reached the 1km to go mark, around the corner there was one final surprise. “Up the stairs you go,” I heard the marshal say as we started to run around the Monument! Experiencing this was worth climbing the steps (slowly of course!). After that it was downhill to the finish! I crossed the line in a time of 3:17 and received a medal as well as a piece of fudge!

This race was fantastic and one of the best I have experienced. I will be back next year!