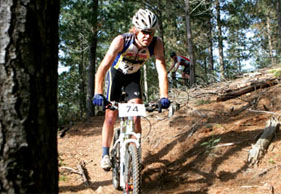 ONCE A CYCLIST ALWAYS A CYCLIST!

After I finished my studies in 2004 I was lucky enough to stay involved in the sport of cycling, as at that stage it just did not seem as if working as an accountant would tame my competitive cycling spirit!

I spent a few months chasing big strong Belgians around on cobbled roads in Flanders, worked with Carinus Lemmer and the Cycle Tour Trust to organise the Giro del Capo and then as a Marketing Manager for one of the biggest cycling importers in South Africa, Omnico. Right now I am involved in setting up a Cycling Academy in Stellenbosch in my spare time, but I am at my happiest managing our team and racing my bike full time thanks to Mr Price and GT Bicycles.

In 2009 it seemed as if I did something right and had a great year winning the South African National XC Title, the Cape Pioneer Trek, Wines2Whales and the AMArider 100-miler.

Not that I believe in fate, but after a combination of signs  I eventually found myself in front of my laptop entering for the DUESOUTH XTERRA Knysna. Every year I find myself in Knysna for the Oyster Festival enjoying the cycling events so I thought  I could just as well branch out my activities for the week. Living in Stellenbosch and bumping into the organisers regularly – and a friendly wager – also helped make my decision to venture into some unknown territory.

With a bit longer than a month available to train for the event I made a mid-year resolution to at least double the amount of time I would spend in my running shoes leading up to the event, which would bring me close to two runs per week, as if that was really going to happen! Cycling is my life and pretty much second nature, so I did not really have to train specifically for the middle discipline.

On race day we had mielie pap for breakfast as my XTERRA groupie thought that if it made the Kenyans run fast, it could definitely help us. Pure logic, I thought! We got to the Pezula Field of Dreams rather early, pinned on our numbers, mingled with the crowds and enjoyed some lunch under the shade of the gazebos watching the XTERRA Lite athletes do their thing. I even had the courage to try and intimidate my fellow star mountain biker, Kevin Evans, but at the end of the day I am truly happy  I did not put money on that battle!

Start time finally arrived and everyone was called up to the start. Like a brave warrior I moved to the front of the line up. I could not believe the speed those runners started with in the first 3km run and realised too late that my legs were just not used to the speed. Needless to say I blew a bit!

At the start of the bike leg I caught my wager buddy, Denise Derbyshire, who is no slouch on the run as she won the 11km night trail run two days before. Being relatively far behind I had a fantastic time on the bike, riding mid pack and loving the crowds and all their chirps!

The final 7km run was the section I was looking forward to the least and to make matters worse it started with a steep cement road, which almost had me on my hands and knees, but luckily  I still had some running knowledge with me in the form of Denise. She nurtured me through the steep single-track ups  and downs of this stunning running route. Too bad she did not show me any mercy in the sprint for the line 2:38 later.

THE TIME OF MY LIFE

All in all I had a fantastic time from the minute I arrived at the venue until we left later in the afternoon. There was such a great and relaxed atmosphere it seemed as if everyone was there just to have loads of fun. The organisation was supreme and everything ran smoothly, just like all the other events organised by Stillwater Sport & Entertainment.

There is no doubt in my mind that I will be lining up for the 2011 DUESOUTH XTERRA Knysna, this time with some valuable experience and definitely, or rather hopefully, with much more speed and agility on the two running sections!

The second leg of the 2010/2011 DUESOUTH XTERRA presented by REHIDRAT? will take place at Buffelspoort Dam (North West Province) on Saturday, 29 January 2011.

The event was won by South African mountain bike marathon champion Kevin Evans.  He finished in a time of 1:39. “Although running is part of my cross-training, it’s definitely not my strong suit. Going into the event my plan was to keep the guys in sight on the first 3km run and then build as big a lead  as possible on the mountain bike discipline.  On the last run I was able to pace myself, reserving my energy for the last part of the race. Coming from a mountain bike background this is something that I am not used to. It really is special. I hope to be in the country next  year this time as I’d love to compete again,”  says Kevin. David Labuschagne came in second, while Kent Horner finished third.

Hanlie Booyens was victorious in the women’s category finishing in an impressive time of 1:59. “The first run discipline was the toughest part of the event as it was really fast. I knew that  I had to use the mountain bike discipline as my means of making up lost time. Pezula is such an unbelievable venue and the weather on the day was fantastic. All in all it was a wonderful event,” says Hanlie. Michelle Lombardi came in second, while Jeannie Bomford finished third.