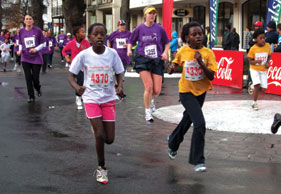 Close to 8 000 women – including a few men in drag – braved the wind in Johannesburg and the rain in Stellenbosch to be part of South Africa’s largest combined Women’s Day running event. – BY SEAN FALCONER

In Johannesburg, defending champion Irvette van Blerk of the Nedbank Running Club overcame the strong headwind for much of the race to successfully defend her title on the hilly course, crossing the line at Roosevelt High School in Emmarentia in 35:31 and setting a new PB for this race. Noeleen Conrad came home second, with Christine Kalmer third.

Meanwhile, down in Stellenbosch, defending champion Mia Pienaar of local club Maties AC, was forced to relinquish her title to junior athlete Lusanda Bomvana of Mr Price Transkei. The visitor crossed the finish line at Coetzenburg Stadium in 37:20, 30 seconds ahead of Pienaar, while Anneline Roffey (adidas) finished a distant third as she continued her build-up to the Cape Town Marathon. Modern Athlete was at the Stellenbosch finish line to get runner reports about their experiences on the day.

Mia Pienaar, Maties AC
I felt really good for the first 4km, until this small junior came up next to me. I didn’t see her at first, and suddenly she came from nowhere. I tried to break her twice, but she just kept coming back, and at the end of the day she was stronger. Once you get a downhill after 7km and somebody opens a gap, there’s no way you’re going to catch them. I tried to break her on the uphills, but she deserved the win today.

Tanya Idas and Natasha Kruger, New Balance Multisport Club
Natasha: We started in the rain which wasn’t so nice, but the race itself was wonderful. Luckily we had our multi-coloured socks on our arms to keep warm – all the way from Knysna! This is the second time I’ve run this race. I enjoy it, but I think they should start the 5km separately, so that the 10km runners can get going cleanly.
Tanya: I also had a good day. Standing there in the rain, you experience the unity that you can only get with a bunch of women, jumping up and down, dancing together in the rain. Even though there is another Women’s Day race closer to where we live, I come here because I love the scenery. Even though scenic always means hilly!

Roslie Richfield, UCT AC
This was my third race of the weekend! I did cross-country on Saturday afternoon, then the trail run at Kaapzicht Wine Estate in the slippery mud on Sunday, and today the 10km. I just wanted to break an hour today, and I did. In fact, I feel so great that I’d love to do another race tomorrow. This was the first time I’ve done this race. They said it was a flat race and it actually isn’t. There’s a lot of gentle uphill, but there were some nice downhills, and it wasn’t too crowded. It was a very nice race, even in the rain.

Marilize Burger, Tygerburg AC
It was very nice race and I ran a PB of 65 minutes, so I’m very happy. I’ve run a few PBs recently because I started training more, doing some speedwork, and it’s obviously paying off. Next week is my first 30km, at the John Korasie. The longest distance I’ve done is 21km, so I’m quite anxious to see what happens there, but I think I’ll be fine, because I’m having a good running year. The only down side is that my calves don’t fit into my favourite boots anymore!

Marise Brink, Metropolitan AC
It’s the third time I’ve run it and it went well, even though my time today was about six minutes slower than recent races I have run. The rain in the beginning was actually quite nice, because I like a cold start – you have to run harder to warm up. Then again, I better get used to a warm start, because I’m going to Cuba for my honeymoon soon and there is a half marathon in Havana while we’re there.

Proceeds raised at the Johannesburg race went towards the Fadimehang Mental Care Centre, while the Stellenbosch race’s charity of choice was the JAG Foundation.