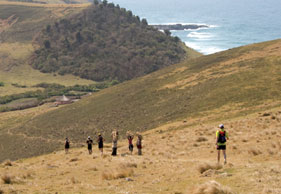 The Wildcoast Wildrun, sponsored by adidas, is fast becoming one of the most sought after multi-day wilderness trail running events in the world! Runners run solo for 112km over three days along arguably the most beautiful and scenic coastline in South Africa – the Transkei Wild Coast. Modern Athlete will soon be taking on the Wildrun journey with 79 other runners. Next month we will bring you an in-depth race review and beautiful pictures from this exclusive race! Here is a sneak peak of what to expect.

The Wildcoast Wildrun starts at the Great Kei River, roughly 80km north of East London, and finishes at one of the most beautiful natural wonders of South Africa – the Hole-in-the-Wall. Between the two is 112km of wilderness like nothing else on Earth, with golden beaches, rolling hills, spectacular cliffs, wildlife, dolphins, warm sea, blue sky and friendly people. The event takes place in the cool but clear winter months and during a spring low tide ensuring hard, golden sand – perfect for running. The route is unmarked and runners simply follow the coastline until they reach the finish of each stage. The grassy hills are broken at regular intervals by freshwater streams and rivers – some a shallow wade through and others a brief, refreshing dip. Endless cattle trails have created some of the best trail running pathways, and runners will enjoy long sections of contouring trails that crisscross the coastline. Spring low tide gives way to rock-hard golden beaches and open rocky reefs. The Wildrun is very much about the journey.

Adidas, the leading global sports brand and one strongly associated with trail running, is sponsoring the Wildcoast Wildrun in 2010 for the second time, following the success of their association last year. Adidas uses the Wildrun as a testing ground for products, not only the shoes, but running tees and other gear, which all runners will receive in their sponsored goodie bags.

Interesting Fact
Continental, the European market leader in the car tyre segment, will supply adidas with the latest rubber compounds for sports shoes with immediate effect. The two companies, both Official Sponsors of the 2010 FIFA World Cup South Africa™ and 2014 FIFA World Cup Brazil™ recently signed a co-operation agreement to this end. The first shoes for the trail running segment are already in the shops, with co-operation gradually being extended to other running footwear. Watch this space next month for an in-depth race review and details on how you too can be part of this awesome race next year.