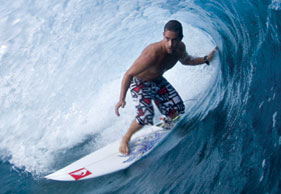 Running plays a large part in almost every sport practised at a competitive level. We explore running’s role in surfing by chatting to Travis Logie, one of the top surfers in the world and a home-grown boy from Durban! – BY MICHELLE PIETERS

When surfers are mentioned, most of us conjure up an image of bronzed-blonde beach bums hanging out on the sand all day, occasionally catching some waves. But we also know that the surfing industry has become a multi-million rand business and surfers take their sport just as seriously as any other sporting professionals.

It is often said that surfing is an art. The metaphor goes like this: the board is the brush, the wave is the canvas and the surfer is the painter. All that said, in order to reach the top of your game as a pro-surfer, you need a bit more than just an artistic touch! Surfing is one of the most physically-demanding sports. You have to be super fit and what better way to get fit than to incorporate running into your fitness regime, says Travis, who has been surfing since the age of 12.

FINDING HIS PASSION
Travis and his younger brother, Dane, saw their older brother, Ryan, surfing with school friends and followed in his footsteps. His first surfing experience was at South Beach in Durban. “We surfed tiny waves and I knew straight away I wanted to do it for the rest of my life.”

As Travis grew up the sport of surfing became more professional. “When I heard how much money some of the top guys were making it all clicked! I realised I could do what I love and get paid for it.”

ONE OF THE BEST
Travis is a veteran of the world surfing tour, having competed on the tour for more than ten years. He knows what it’s like to take on the world’s best.

His proudest moment is winning a World Title for South Africa in front of his home crowd in Durban. “I’ve also won some big international world tour events in Brazil, Australia and France. Currently I’m ranked 30th in the world.”

SURFING FITNESS
“I’m friends with some really fit guys who play soccer and rugby professionally and if  I take them surfing they are exhausted within 20 minutes. It’s definitely something you have to specifically train for in order to get fit enough to surf for a couple hours every day!”

In surfing the core area works the hardest. Surfers also need to keep their thighs strong and loose. “Cardiovascular fitness is just as important as you spend the majority of your time in the water paddling, either back out from a wave or against a current once you’re out there. Then you need enough energy and power to surf the wave well when it does arrive!”

TRAINING
Travis surfs twice a day, six days a week. Each surf lasts about 90 minutes and his coach films him at least once a day so they can keep a watchful eye on his technique.

He works out in the gym five times a week for an hour at a time. “Most of it is core work on a Bosu ball. I do crunches on the ball, balance on my knees and do lightweight curls. I also stand on it and do lightweight arm work and squats, which is really advanced but is a perfect training method for surfing. Depending on my fitness and surfing level I might include lightweight leg extensions or rowing. I train about 27 hours a week.”

Two to three times a week Travis does a combined beach run and swim session between the piers of Durban. Each session lasts about 30 minutes and he covers about 3km on the run. “It’s really good for cardio fitness and keeps my legs strong.”

A typical session looks like this: “When I swim I run to one pier, swim around it back to shore and run to the next one and repeat. The swims are about 250m and I’ll probably do four or five depending on the ocean conditions.”

He enjoys running though it can be challenging in summer when trying to run on hot beach sand. “Most pro-surfers don’t run at all which means including running in my cross-training gives me the edge over them!”

LOOKING AHEAD
His short-term goal is to reach the top ten in the world and his long-term goal is to bring the world title to South Africa! “I’m completely addicted to surfing; my life revolves 100% around it.”

The support from his family has been amazing. “My parents had to support my travels for the first year on tour and it’s not cheap! My brothers are both amazing surfers and are always there for me; so is my wife.”

He realises he has one of the coolest jobs in the world. “I know how lucky I am and I want to prolong it for as long as possible.”

FAST FACTS
Favourite food: Sushi
Favourite place to surf: Maldives
Life motto: Always believe in yourself and you will succeed.
Role model: Roger Federer
First poster ever on your wall: Kelly Slater
Best advice: The more you practise the luckier you get!
What does no one know about you?

I’m a pretty good juggler, an Arsenal supporter and I’m related to the guy who invented the television!