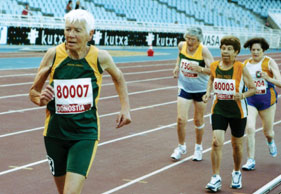 She ran thousands of kilometres between various cities in South Africa in the 70s and 80s and at the age of 53, Mavis Hutchison became the first woman to run across the United States, from Los Angeles to New York City. The journey took her 69 days and she covered about 5 000km, an average of 72km each day in a record that still stands. Not bad for someone who was a sickly child and only started running at the age of 37! Today this remarkable woman, better known as the Galloping Granny, is 86 years old and is a World Ranked Masters Track and Field athlete. She still trains two hours a day and believes that everything worthwhile is earned by the sweat of your brow, one step at a time. – BY MICHELLE PIETERS

Until the 70s it was uncommon for women to run very long distances, especially older women. Then in 1963, along came 47-year-old Mavis Hutchison. She was the first woman in the world to run a standard marathon and the first woman to run the Comrades Marathon. She also set a new world record when tackling 171.26km in 24 hours in Johannesburg. And that was just the beginning of ‘Marathon Mavis’ or the ‘Galloping Granny’ as she affectionately became known.
She continued to run thousands of kilometres in South Africa before becoming the first woman to run across America, a record that is held in the Guinness Book of Records.

Today Mavis has slowed down a little, but she is certainly not over the hill! Since 2005 she has set South African W80+ master records for 110m (18.84 sec), 200m (45.46 sec), 400m (1:52.88 min) and 800m (4:34.13 min). “Wherever
I compete I am just one of the athletes. I am not an old
woman who is an embarrassment. Age is irrelevant; it is just
a chronological process, which is with us from the time that we are born. Sport has opened my heart and my mind to realise there is more to life than a daily routine. Sport has enriched every aspect of my life.
I feel like a bird set free from a cage,” says Mavis, who today lives in Cape Town and who is still as passionate about sport as she was back in the good old days.

GROWING UP YEARS
Mavis, one of identical twins, was born in Kimberley. As a child she was sick, nervous and timid. She suffered three major nervous breakdowns and spent months in bed. Sadly this kept her from participating in sport as a child. During the war years she worked as a fitter and turner. Mavis found love and got married. It was not to last and when they got divorced Mavis moved to Johannesburg. She then met her second husband, Ernest, who sadly passed away 19 years ago.

SHOWING MOM THE WAY
Mavis has four children from her two marriages. Her two sons, Jesse and Allan, were both very sporty and belonged to Johannesburg Harriers Athletic Club. “Even as an adult I was not very healthy and strong, but the boys encouraged me to train with them. The Rand Daily Mail Big Walk became a very popular annual event. Jesse won this event and he became one of the top walkers in Southern Transvaal! The first time I did the Big Walk in 1964 I trained very hard; or so I thought. It rained most of the way and after about 20km I had enough and called it a day.”

During the following year Mavis entered many walking races. “I soon learnt what real training was all about and in 1963 I did the Big Walk 80km in a time of 9:35, which was a record.”

In 1963 she decided to tackle a standard marathon, becoming the first woman in the world to complete a marathon. “I pioneered women’s road running in this country. Official distances for women in those days were 800m according to the IAAF. I was considered a freak! People pitched up at road races just to see me.” Many firsts followed; Mavis was the first woman to run the Harrismith Mountain race and in 1975 she ran 1 500km in 22 days from Pretoria to Cape Town. Her talents were not limited to road running. In 1977 she competed in Sweden and won two silver medals in the discus and 100m events. She continued to compete in various disciplines at local track events where she often won gold or silver medals.

COMRADES MEMORIES
In 1965 Mavis recorded another first. She became the first woman after the war to run the Comrades Marathon. “I was looking for a new challenge and thought there is no bigger challenge than the Comrades Marathon. I had to compete unofficially.” Mavis, who weighed a mere 48kg, trained mostly on her own. “Running the highways and byways made me a stronger person. It allowed me to cope with what life had to offer. I grew mentally, physically, emotionally and spiritually.”

Her husband and son, Jesse, entered the Comrades Marathon in the same year Mavis did. “It was the wettest Comrades ever! I found the weather a major handicap. I caught Ernest just before Drummond where he decided to call it a day. That day I learnt the true meaning of mind over matter. A thousand times
I wanted to give up and a thousand times I knew I had to keep going. I almost gave up at Hillcrest where the rain was at its worst, the wind at its strongest and the cold more than I could endure. I finished cold, wet and triumphant. ”Mavis crossed the line in a time of 10:07 and went on to complete the Comrades seven more times.

FROM LA TO NEW YORK AND
ACROSS BRITAIN
In 1978 she undertook a run from Los Angeles to New York City. “I was very apprehensive at the start when I realised 5 000km lay ahead of me. I wished I was back home already and safe.” The whole trip from the first step to the very last step left a lasting impression on Mavis. “There were times that I was not sure I would get to the end of the day, let alone the end of the week! Sometimes even the next hour was not a certainty.”

On the 33rd day of her journey she was reduced to walking due to serious shin splints. “I was devastated. I remember the excruciating pain. It felt like I was on a suicide bid.” In spite of this Mavis continued running. She ran in intense heat, bitter cold and seven days of ceaseless rain. The physical pain outweighed the joy and sense of achievement she felt on fulfilling the ultimate dream. “I had been tried and tested to the absolute limit. I had run through 13 states and four time zones. I had run about six million footsteps – one agonising step at a time.” But the day after the run reality hit Mavis. “I thought surely this cannot be the end of the road? Surely there have to be more goals and challenges ahead!”

Mavis was sure to find new challenges; a year later in 1980 she completed the roughly 1 800km journey from John o’ Groats to Lands End across the length of the United Kingdom. “When
I saw the South African flag at the finish I burst into tears. When you are in a foreign country and you see the flag of your country, you feel your country is saluting you. At the same time you feel humble and grateful. This run taught me there are no limits to what one can achieve.”

STILL GOING STRONG
Over the years Mavis has kept fit and strong, competing in several provincial and South African Championships. Since 2005 she has also competed worldwide in various World Masters Games. In 2009 she competed in the World Masters Games in Sydney, Australia. “I competed in the 100m, 200m, 400m,
800m and the javelin. I won five medals: three silver and two gold.” Mavis also competed
in the Africa Games in Mauritius where she was presented with a special trophy for many years of achievement in sport. She also won gold in the 100m, 200m and 400m events. Recently at the Vaal Triangle Championships this year, Mavis set a new SA record (11.33m) for javelin.

“Sport has opened so many doors. I am a very shy person, but sport has helped me to overcome that to some extent.” She still trains two to three hours a day four times a week on a track or sports field by first warming up, stretching and then doing the exercises specific to the discipline she is training for.

Since she started exercising all those years ago she has had no major health problems. “From the day I started exercising it took almost two years before I noticed the improvement in my health. My circulation improved and I had no more chillblains in winter. My nervousness also disappeared and I realised it was okay to fail as long as you keep trying and realise that sometimes you have to move the goal posts. I also learnt that attitude not circumstances creates events. I owe my quality of life to years of regular exercise. A healthy body is connected to a healthy mind and spirit.”

Mavis has now set her eyes on the World Masters Games in America next year. Listening to her speak she is sure to bring back gold. “We don’t grow old. When we stop growing we are old. It is vital to always keep on setting goals. I know everything worthwhile is earned by the sweat of your brow, one step at a time.”