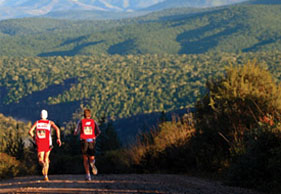 I loved the ferry crossing to the start of the trail run, the stunning scenery along the Heads and up to the mast, and the railway bridge crossing was special too. Then on to the Xterra, with its stunning venue at the Field of Dreams.

The half marathon was the last of five hard events and my plan was to simply enjoy it. I ran with friends, getting loads of comments about how only women could run and still talk so much!

I was up at the start very early, because the friends I went with were doing the marathon, which started an hour earlier. I ran in my Superman costume to raise funds for Stellenbosch Animal Welfare. I usually advertise through the local newspaper and on Facebook, asking people to deposit donations straight into the Animal Welfare bank account, using Superman as a depositing reference. I just want to know that I’m making a difference.

The new section they added this year made the race a lot more scenic, with more mountain and forest views, but it makes it a little tougher. I wanted to go for a sub-90, but maybe went off a bit too fast and had to settle for 92.  Still, I finished just in time to see the kick-off of the Springboks-All Blacks test!

A field of 670 marathoners headed deep into the tranquil Knysna forest. The course climbs steadily for the first  8km, before levelling out until halfway. On both sides of the gravel road is spectacularly lush forest scenery.  The highlight of the second half is a knee-jarring descent into a magnificent river gorge at around the 30km mark, followed by an energy-sapping 2km climb. Then runners pass through the Simola Golf Estate, before dropping down to the lagoon for the final few kilometres.

The cool, misty conditions were perfect and a change to the finish venue meant that we were treated to an extra 3km in the forest. The Knysna Marathon Club should be congratulated for the flawless organisation.

If one had to choose a race in SA that every runner has to run, it would definitely have to be the Knysna Marathon.

A few of our club members decided to experience this much talked about race. The goodie bags were awesome!

I found the course quite hilly, but breathtakingly beautiful. This is an absolutely stunning event, the organisation is great, the route is beautiful, the people of Knysna are friendly and I cannot wait till next year’s race.

I arrived in Knysna to run the marathon and in hindsight was probably a bit overconfident and under-prepared. Having completed the Comrades quite comfortably six weeks previously, I thought I could conquer anything with the minimum of effort and preparation. I was in for a surprise.

The gun went off at 7am and we were greeted by a 3km climb. The nervous banter quickly subsided, replaced by the sound of heavy breathing. The initial hill was the first of many unrelenting inclines and a few just as gruesome declines. The scenery and tranquillity of the forest were amazing, but the gradient took its toll and by halfway my legs were as heavy as logs. It seems that as the beauty increased, so did the difficulty… almost as though you had to earn the privilege of being in this special place. As with any long run, finishing is a great relief, almost a feeling of euphoria, and this was no different. Will I be back next year? Hell yeah!

The cliff edge was precipitous. The view of the gorge below was magnificent. The river rushing through the gorge gurgled faintly below. These are the defining memories of my debut Knysna Forest Marathon. However, there was not much time to enjoy the scenery as I had  80 minutes left to complete the last 10km of this gruelling race within the five-hour limit. With that I hurtled down into the heart of the gorge below.

After a 12km uphill to warm up, I got to level ground where the sunrise afforded the most magnificent views of the forest and surrounding mountains. Later the forest gave way to the spectacular Simola golf estate with green vistas in every direction. Beyond this the Knysna lagoon promised that the end was near. I completed the marathon in 4:54 and my wife Germaine, her half in 2:13. Next year will definitely see our return to this beautiful race.