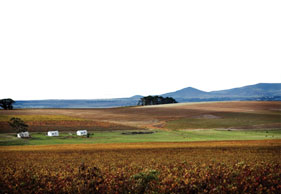 True to club traditions, Durbanville is celebrating its 25th birthday in 2010 with lots of long distance mileage on the road, and plenty of post-run socialising in the clubhouse! – BY SEAN FALCONER

A first-time visitor to the Plexus Durbanville Athletics Club’s Member of the Month awards evenings would be in for quite an experience. The Durbac Captain’s Team calls the meeting to order and begins the presentation. But this is no ordinary presentation. The Club Captain describes what each runner has done to deserve their award, and then the winners are called up to get their awards. But first, they must adopt the Humble Pose…

They must bend forward and touch the insides of their knees with their opposite arms – right hand on inner left knee, left hand on inner right knee – and remain in that pose while the Captain’s Team ‘salutes’ them with a group war cry – and there are different versions for different awards. Without a doubt, the best one is the customised Haka, copied from the New Zealand All Blacks rugby team, but with adapted words
that include “Run Fasta, Fasta” and “Run Furtha, Furtha.”  It’s priceless!

It’s also quite appropriate that the word ‘further’ appears so prominently… because Durbac is not just known for its great socials; the club is also known as a great long distance club. As chairman Lionel Klassen puts it, “We had 99 finishers at Comrades this year as well as big fields in the Two Oceans, Laingsburg and Bainskloof Ultras, and last year we had six women in the Western Province squad for the National Marathon Champs. Our club just seems to love the long runs.”

HOW IT ALL BEGAN
The club was established in 1984 when the owner of Workout Gym, George Taylor, mentioned to his aerobics class that he had watched the Comrades on TV and that he wanted to run it. Several members of the class decided to join him and start training immediately to give themselves a full year to prepare, as none of them had done any running before. That Sunday, six runners ran 5km out to Fisantekraal Farm and back, and things grew from there – although poor Dave De Villiers took weeks to recover from the blisters he developed from running in Bata tekkies!

The Sunday runs soon saw the introduction of a seconding car, complete with water and sponges, and proved so popular that Tuesday time trials and Thursday pack runs were added. Amongst those pioneer Durbanvillers were Kathy and Martin Burr, who still speak fondly of those first pack runs: “Our best memory of the early years remains the camaraderie surrounding the seconding car – we were able to load our twin sons into the car and enjoy a carefree run. This camaraderie has endured and makes Durbac what it is today.”

Soon the group started talking about forming a club, but in order to meet the minimum requirements of Western Province Athletics, the full membership list of the gym was presented as the running club’s membership! Back then, the club colours were chocolate brown shorts and a brown-white vest, with the brown half on top. The rose was adopted as the club logo, inspired by the well-known Rose Garden in Durbanville, which is one of the leading areas in South Africa for rose cultivation. In 1988 the vests changed to an all-white design with the club name written on the front. This was partly due to the unavailability of the brown vests, but also because some members simply didn’t like the colour. When brown shorts also became difficult to find, yellow shorts were introduced. The acquisition of the first clubhouse in Langeberg Road (now demolished) played an important part in developing a healthy club culture… because legendary post-run parties became the norm. By 1989, the membership had passed the 100 mark, and by 1992 it had shot past 200. A bigger, more suitable clubhouse was needed, so the club arranged to use the Durbanville Squash Club’s facilities from 1993, and more recently moved next door to the Durbanville Hockey Club, which has great facilities including changing rooms, showers and a well-stocked bar! Today the club has some 350 members as well as 30-plus young development athletes, making Durbac one of the biggest clubs in the province.

AN AMAZING SPONSOR PARTNERSHIP
In 2005 Plexus Asset Management came on board to sponsor the club’s annual marathon (which has subsequently become a half marathon and 10km event, due to take place on 31 October this year). It was a happy marriage from the beginning, with Plexus Executive Chairman Dr Prieur du Plessis being an active runner, as are Managing Director, Paul Stewart and Marketing Manager, Gys Botha. The sponsorship was soon extended to a five-year full club sponsorship, which saw the club’s name officially changed to Plexus Durbanville AC. “We are very proud of our association with the club as well as of the athletes’ performances. It is an extremely well-managed institution that provides its members with a fantastic environment in which to train, compete and socialise. Our relationship with the club is more like being family,” says Gys.

A portion of the sponsorship is allocated to support underprivileged runners in the club’s Youth Development Programme, which was initiated four years ago, says Club President Dr Alan Nelson. “We adopted the Trevor Manuel Primary School in the Fisantekraal informal settlement, and over this period, between 25 and 40 young learners have participated as members of the club in cross-country events. They have done extremely well and in the past two years have often placed top of the log, particularly in the boys’ and girls’ under-nine and 11 age groups. With sponsor support from Plexus, we have been able to supply the kids with club kit, and club members actively support the learners by providing food packages during events.”

TRAINING TOGETHER
The club holds official training runs on Tuesday and Thursday evenings at 6pm as well as Sunday mornings at 6am (7am from April to August), with all runs starting from the clubhouse. On Tuesdays, the main group does a 12km run with water stops, with slower runners, beginners and walkers also catered for with the separate Penguins’ 9km run, beginners’ 4km run, and introductory level walking group, all led by experienced athletes. Some Tuesdays see the club doing a track workout on the field in front of the clubhouse. On Thursdays, the group does either a 12km or 16km pack run.

The superbly-organised and very popular Sunday morning runs are now considered a proud club tradition, says Lionel. “This is such a lovely area to run in. You only have to go 2km from the clubhouse and you’re in the vineyards, and we often have members of neighbouring clubs joining us.” The runs are usually about 20km long, with a different route every Sunday and with water and Coke stops every 4km. Each runner is asked to pay R7, to cover the costs of seconding, and there is a seconding duty list, with all members taking a turn. Luckily, with 350 members and just 47 Sunday runs in a year, nobody has to do seconding duties more than once a year and the long-distance junkies in the club can all get their regular fix.

FRIENDS FOR LIFE
Lionel is now in the third year of his second stint as Chairman of the club, and says that he particularly enjoys the way old and new members mix both on and off the road. “The Durbanville area is growing so fast and we have many new members coming in each year, but I love the fact older members stay with us, even when they no longer run. Many of them still come to club functions, and we have a great atmosphere at our socials.”

Other calendar highlights include the Beginning of Year Party, where new members are officially welcomed, the annual prize-giving, and the pre- and post-Comrades parties. Towards the end of the year the club also holds its annual pub run, which has now become so popular that it has earned the status of official club year-end party. “All members and their families are encouraged to participate in these socials because we believe that membership means much more than simply obtaining a licence to run races,” says Lionel.

Another thing the club is proud of is the several members based overseas who still proudly fly the Durbac flag. For example, Hilary Johnson says her brother Nigel Bennett recently relocated to New Zealand, but still runs in his Durbanville colours and came back for the special 2010 Comrades. “I had to purchase his new running kit from Somerset Sports Cape Gate in February and send it to New Zealand so that his wife could stitch on his running numbers for Comrades. Now how’s that for loving
your club?”

Elizabeth McCaul – seventh woman in 1997 Comrades; fourth in 1998 Two Oceans; twice represented SA at World 100km Champs in 1999 and 2000, winning the veteran category and part of the winning veteran
women’s team in 1999 to be crowned double World Champion.

Riel Hugo – 40 consecutive Comrades Marathon finishes from 1969 to 2008, running for Durbac from 2002 to present; one of only four runners to finish the race 40 times.