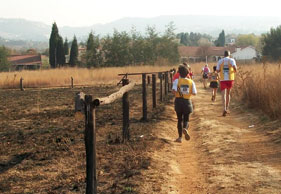 The Alberton Rietvlei 15km in the South of Johannesburg was an off-road experience like no other. Though the route was fairly tough, the scenery made up for it! You could have been forgiven if halfway through the race you thought you were in the middle of a beautiful forest. Johann du Plessis shares his race day experience with Modern Athlete.

The name ‘country run’ best describes this race because you truly feel as if you are somewhere out in the country when you arrive at the race venue at Rietvlei Farm situated on Swartkoppies Road in Alberton. Over the last couple of years Rietvlei Farm has become very popular amongst off-road runners and mountain bikers alike as a number of running and cycling paths, varying from easy to difficult, have been developed within the farm. When you arrive at Rietvlei Farm, with its many animals roaming around, a true country atmosphere awaits you.

The weather was perfect for running. Though it was a little cool at the start, we could not have asked for a more beautiful day. The race started at 8am and runners came out in their numbers to support this unique race. If you are a pure road runner with very little off-road running experience, you would have found the 15km trail race fairly tough, but in my opinion this was the perfect race to introduce road runners to trail running. The race was run on mostly dirt road with some cross-country sections. The first few kilometres were run on a dirt path that was fairly wide and smooth. This helped spread out the runners before a single track started.

We zigzagged through some tall grass and the course was fairly flat until we reached the first single trail. After running through a few patches of trees, we finally got to the hills. The climbs weren’t too steep or too long. Just as the going got tough, you would reach the top. The downs were also not too technical and could be negotiated safely, although there were many novice trail runners that made friends with the ground!

The scenery was beautiful and the sky blue. I’m not sure if the second half was easier than the first, but I was feeling very good and enjoyed running through the trees and crossing a small water duct several times. The last few kilometres were flat and the path towards the finish was wide enough for runners to run comfortably and finish fast if they chose to.

Everyone received a medal and stickers with motivational messages from one of the race sponsors. It was a family day where the kids and family members could also enjoy the 4km fun run held on some easier trails. I would recommend this race to anyone who wants to get into trail running or who would just like to experience a trail run. The race was extremely well organised. Well done to Alberton Amateur Athletics Club for putting on a great event!