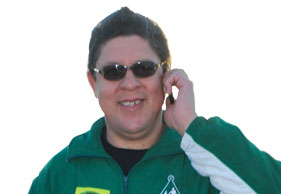 Two of our lucky readers just had their lives changed by Modern Athlete and the great people at Run/Walk for Life (RWFL). Edwin Olivier of Kuilsriver in the Cape and Roxene La Grange of Johannesburg have been selected as the winners of our RWFL/Modern Athlete Win a RWFL Franchise competition.

When we launched a once-in-a-lifetime opportunity and gave our readers the chance to turn their passion for running/walking into a profit by owning their very own business, we thought it was a great prize and would attract a lot of interest. We were inundated with quality entries and had a hard time deciding on the winners! Eventually the selection was narrowed down to two and needless to say, their dreams were made true!

EDWIN OLIVIER, PROUD NEW OWNER OF
A RWFL FRANCHISE IN THE CAPE
Edwin Olivier of Kuilsriver got the surprise of his life when he was announced as one of the winners. When Edwin received a call from Western Cape RWFL Regional Co-ordinator Deon Lerm, asking him to come down to the Panorama branch for a final interview, he had no idea he was actually being brought in for a surprise announcement that he was one of the two winners of the competition.

“This is a life-changing moment and I never dreamt I would win something this meaningful. I’ve won a few lucky draw prizes at races, but never anything like this!” says the 45-year-old infrastructure planner with the Post Office.  “I have worked for the Post Office for 25 years, but had a long-term plan to find something else, so when I saw the competition in Modern Athlete, I thought why not, because I would love to work in a field where I can make a living from my passion for running. But just as important, I want the satisfaction of helping others achieve their goals.” Edwin has been running for two years and has one Two Oceans and one Comrades medal to his name, as well as a number of marathons and shorter races. He openly admits that not so long ago he was a couch potato, but a couple of things happened to convince him to get off the couch. “In August 2008 we had checkups at work and they told me I was overweight and a good candidate for a heart attack. Then my 62-year-old cousin died of a heart attack at the end of January 2009, and that really made me want to look after my health. A week later, my wife, Anilee, was late getting to the start for the Saturday morning training session with her In Touch AC club mates, so I went with her and we walked 8km together.
The following Tuesday I joined the club training session and I was hooked.”

ROXENE LA GRANGE
Roxene La Grange of Wilgeheuwel in the West Rand entered the competition only days after she received Modern Athlete at the Comrades Expo. “I had just run Comrades and when I read about the competition I knew it would be a dream come true. I have always had a huge passion for sport. It is a part of my life and keeps my mind and soul free,” says Roxene who works as an au pair and is also a qualified sports development coach.

A month later she was notified that she had made the top 65 list of potential winners and some time after
that she received another mail. She also had a look at a RWFL franchise to get the feel of what it is about.
“I sent RWFL a mail and said I loved what I saw! When Matthew Grossett [RWFL CEO] phoned me I thought it was in reaction to my mail. Then he congratulated me as the second winner! The first words I got out were: ‘You are my hero!’”

Roxene is only 23 years old but it is clear she has more drive and maturity than most people twice her age! “Don’t let my age fool you. I am passionate, I believe I can be a good role model; I am goal driven and love to motivate people to take up a sporting challenge!” Roxene has a huge passion for sport and has excelled at numerous sporting disciplines over the years. Most recently she took on her very first Comrades Marathon and is planning to tackle the Duzi soon!

“I am so excited! Every month I read Modern Athlete from front to back. I love reading all the inspirational articles and now I am going to be featured in the magazine. And on top of that I am the owner of my own business at the age of 23! Only a month before I entered the competition, someone asked me what my goals are and I said I would love to start my own business and help others. Look at me now!”

Edwin and Roxene will now undergo three to four months of training, and will take charge of established Run/Walk For Life branches for a few sessions to make sure they are ready, before opening their own branches around January 2011. Edwin will open his branch in the Brackenfell area and Roxene’s branch will be situated in the West Rand.