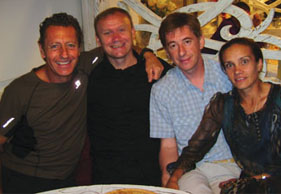 Many of us visualize Russia as a mysterious country and in the running world, a country that produces top athletes year after year. In fact, some of the Comrades greats hail from this former communist country. Nick Bester, Manager of the Nedbank Running Club, caught up with Dmitri Grishin, Comrades Champion of 1996 and 1998, and other international Russian athletes in their home town of Vladimir.

A ROUND TRIP!
Dmitri and I have been friends for as long as I can remember. Though we have been great competitors we have built up a special friendship over the years. I visited him for the first time in October last year when my son took part in the Junior World Cycling Championships held in Russia.

This year my wife and I visited our son who is currently cycling for a professional team in Spain. We decided to travel from Spain to Russia and visit Dmitri, who is always complaining we don’t see each other often enough. We travelled from Moscow to St Petersburg and then eventually to Vladimir, about 200km from Moscow.

CATCHING UP
One of the first things I realised when catching up with Dmitri was that he certainly knows how to turn running success into business success. When Dmitri retired from competitive running in 2005 he did not fall into unemployment and poverty like many top runners. He started with a totally new career that he knew nothing about and turned it into a great success story.

At the end of 2005 he started to build houses in his hometown, Vladimir. Since then he has completed and sold 14 luxury houses with the biggest measuring 600 square metres. Some of the houses are being sold for about R5 million. The residents are naming one of the streets in Vladimir, Dmitri Prospect, as he has built four outstanding houses in this street.

The houses are incredible inside and the workmanship is amazing; some have indoor swimming pools, underfloor heating systems and electricity as well as gas facilities with sophisticated operating systems.

A PROUD HUSBAND AND FATHER
Dmitri is married to Nikita and they are the proud parents of three strong boys. He says he will try for a daughter once again but not before 2016 because in true Russian fashion his doctor advises him that his genes and blood are too strong and dominating, so the chances are that he will not produce a girl before then!

He does not train much these days, but is still as lean as ever. He ran a 5km race the other day just for the fun of it.

While the Spanish fill up with bread and pasta, the Russians enjoy mostly protein, salad and vegetables. Physically the Spaniards are a bit ‘rounder and softer’ while the Russians are more like lean machines. They are very health conscious and thrive on fresh fruit and vegetables. One day we travelled to a small town just to buy fresh cherries and berries from people who grow them in their backyards.

FAMOUS FRIENDS
Another Comrades gold medallist and Comrades runner-up in 2000, and one of Dmitri’s best friends and training partners for many years, is Alexi Volgin. He lives around the corner from Dmitri with his wife, Natalia. She is also a Comrades gold medallist who is now concentrating on marathon running. She recently ran a great time of 2:29 at a marathon in Frankfurt.

One evening when we all went for dinner at a local restaurant, we realised that between the four of us we have a total of 20 Comrades gold medals! I have nine gold medals, Dmitri has four, Alexi has six and Natalia has one. Not bad for a table of four in a quiet Russian town.

Natalia belonged to the former Harmony Running Club, which I managed in earlier years. She won the Two Oceans Marathon in 2002 and got that gold at Comrades. We had such a good time and strangely enough we did not talk much about running. We actually spoke about everything and anything, life in general which was nice and refreshing.

DOING IT THE RUSSIAN WAY
One thing about the Russians that I admire is their hospitality and friendliness! They always send you away with gifts. While Dmitri was in South Africa, he stayed with Piet Botha, son of Pik Botha, former SA politician. Dmitri sent me away with a Special Edition bottle of Hennessey, a brand of cognac, that he wanted me to give to Piet. One can’t buy Special Editions; Dmitri specially phoned a friend at the head office to ask for ten bottles!

While visiting Dmitri, the Russian twins, Elena and Olesya Nurgalieva, phoned and said they heard I was in the country. We had a nice chat, and they invited me to visit them sometime. They were taking a break after Comrades, but were slowly starting to train again despite being on holiday.

Dmitri is very keen on South Africa. When he was here the last time he shot some game and I recently helped him get his trophies back to Russia. He will be visiting South Africa towards the end of the year with friends.

It was awesome visiting them; I will go back any day! They are like family.