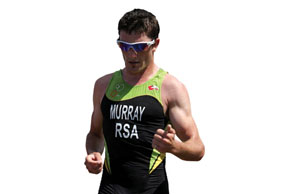 Most Modern Athletes have a special sporting goal: it keeps us on our toes and makes for great conversations once we’ve achieved them! We spoke to an elite triathlete and a novice runner about their different upcoming sporting goals.

Former World Duathlon Champion and top SA mountain biker. He is currently based in the UK and competes on the European racing circuit.

MAIN GOAL
To become the world’s number one triathlete and get to the Olympic Games.

What are your major triathlon goals at the moment?
Becoming the best triathlete in the world is my big goal, but first I need to improve my swim! Right now I want to race International Triathlon Union (ITU) events and gain enough points to race World Triathlon events. Then I want to get a top ten place at the World Triathlon Championships in Budapest on 11 September. My other big goal is to represent South Africa at the Olympic Games in 2012, then go on to win the Olympic triathlon in 2016 or 2020.

How do you intend to achieve your goal?
I want to be able to swim with the top 30, which is vital to gaining a bunch on the bike. That’s going to take a year or two of suffering in the pool before I will be able to really excel.

Tell us about your sporting background and how you got into triathlon.
I began as a cross-country runner at about seven and then did my first triathlon when I was 13, going from stone-last in the swim to winning as I caught up big time in the run. When I was 15 I was the best SA cross-country mountain biker in my age category, and then at 18 and 19, I was two-time World Duathlon Champion. But I asked myself, can I make a living in duathlon? The answer was no, so from last year I focused on triathlon.

Do you have any short-term goals?
Racing is an important factor to improve fitness and see progression in training. I will do about five races in Europe and some swimming events before World Champs to improve my swim and gain open water experience, and this will give me vital fitness, skills and direction to improve for the big race in September. I will also do quite a few African Cup events to get ITU points, which are vital for me to enter the major races in the year to come.

What will you do after you reach your goal?
After ITU triathlons I want to go back to my roots and move into XTERRA. Mountain biking, trail running and swimming in lakes sound like great fun to me. When I’m past my competitive peak, I want to move into coaching and become the TSA coach, to help triathlon become stronger in South Africa. I want to help turn the real potential in our country into world-class athletes.

A Johannesburg-based journalist and novice runner.

Why did you choose this specific goal?
I realised that I had to start exercising and I also wanted to lose some weight. I knew the only way to do it was to commit to something and set a goal for myself. I promised two of my girlfriends I would do the Spar ‘fun run’ – as they described it – with them. I thought setting a goal and training for it was the best way of getting into a routine of working out. So now I am going to keep my promise and I am getting a great workout at the same time!

Have you competed in any road races or other sporting events before?
No, I have not exercised for years! Even at high school I was never much of an athlete. I played a bit of netball and tennis and continued for a while after school. Over the years I occasionally worked out in the gym, which involved a bit of running on the treadmill. But other than that I have never competed in organised sporting events.

How do you intend to achieve your goal?
With hard work, commitment and by the looks of it, a lot of exercise, which is so not me! I am sure I am the most unfit person in the whole of Johannesburg. I started going to the gym twice a week since the beginning of July. I increased it to three times a week after three weeks and hopefully I will be in the gym five times a week soon. This will be a huge achievement for me. I am also working out with a personal trainer and a friend gave me a five-week 5km training programme so I can be ready for the Spar Ladies’ Race.

I know for sure that on the day I won’t be able to run the whole 5km without stopping, but I know I will be able to walk/run the distance. I must admit I don’t really like running, but I know it is good for me. This combined with a healthy eating plan will also hopefully put me on my way to shedding a few kilograms by the end of August.

What has been the hardest part of your training?
I am not the most disciplined person and I love my sleep, especially in winter. It has been really hard to get up in the mornings and go to gym. But luckily I paid my gym membership in advance and I know I have to go in order to achieve my goal.

And then of course there is the promise that I made to my girlfriends. I can’t disappoint them! My working hours are getting in the way of my training; I am in and out of the city a lot and I’m also going on holiday. I am worried I won’t stick to my training programme, but I am determined to try.

What would you like to achieve on the day?
I just want to complete the 5km without having to drag myself over the finish line, or asking my girlfriends to drag me! I want to have enough fitness by then so I can enjoy it. I am not setting a finishing time for myself. I just want to run, walk and have fun. And if I can burn lots of calories in the process I’ll be in seventh heaven! I am looking forward to crossing the finish line knowing that I set a goal for myself and achieved it! It is also going to be great being surrounded by so many women all having fun and working towards different goals.

Any plans to reward yourself if you achieve your goal?
If I finish and also manage to lose a few kilograms by race day, I will definitely be rewarding myself with a pair of Lee Cooper jeans!

What are your sporting goals after you reach your goal?
I want to swim the Midmar Mile in January… another promise to two girlfriends…