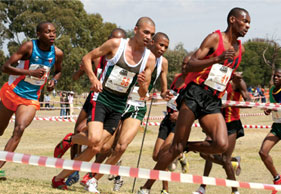 Cross-country has often been regarded as the stepsister of track and road running. Then one man decided to take the lead and create new structures, allowing mass participation especially amongst school kids in this often disregarded sporting discipline. His efforts have paid off and today, cross-country in Gauteng North is blooming to such an extent that other provinces could take home some valuable lessons on how things should be done within cross-country structures. – BY MICHELLE PIETERS

If you had pitched up at any weekend cross-country event in Gauteng North less than two years ago, you would be lucky to find 600 athletes lining up at the start. How things have changed! Just a couple of weeks ago more than 2 800 athletes of all ages and abilities took on various organised cross-country events in and around the Jacaranda City. All this would not have been possible if it wasn’t for one man’s passion and drive to bring various role players together in order to put cross-country back in its rightful place. Andre Gobey, Chairman of the Cross-Country Committee: Athletics Gauteng North, believes our country has the ability to produce some world class cross-country athletes if we manage to better our current cross-country structures.

ONE SMALL STEP
For many years various athletics structures, departments and schools all organised their own cross-country meetings in Gauteng North. This led to a small number of athletes arriving at the meetings, and often the dates of the various meetings clashed. “In the past we had primary schools organising their own meetings, high schools doing their own thing as well as the Department of Education and private schools all organising their own races. All of us were always fighting for the same sponsors, the same venues, administrators and even athletes,” says Andre, who has been running since the age of ten and who has been involved in the administration of athletics since 2004.

Andre started discussions with all the various role players and before long they were all around a table talking about ways to better the organisation of the meetings, and most importantly, to benefit the athletes and the sport of cross-country in general. “We started with a mass participation project amongst school children. The Pretoria City Council helped to drive this side of the project; they were very passionate about getting kids from less-privileged communities involved in cross-country, especially because some of these kids don’t have any facilities to train at school.” This meant Athletics Gauteng North organised cross-country meetings for school children and the City Council helped transport hundreds of kids to the meetings. “We tried to expose the kids to cross-country and make them love the sport, which I believe is a building block to success in other sporting disciplines,” says Andre.

Today many of these meetings are held during the week, which means more school kids are introduced to cross-country and get to participate as they are transported during school hours to the various races. In the past the meetings were mainly held on Saturdays, which meant many kids didn’t pitch up as parents were often busy and didn’t have time to get their kids to the different venues, or didn’t have the means or financial ability to get their kids to the meetings. Since the weekly cross-country races were introduced, as many as 2 800 competitors have been participating in various cross-country meetings held over one week.

Andre believes that introducing cross-country to kids is like introducing them to playing. “We try to make kids love running through cross-country; it is the basis of all sporting disciplines. Once you love cross-country running, you will probably keep on running for the rest of your life.”

Another major bonus that came from the new structures was the discovery of amazing talent. In the last three years more than 80 kids who started through mass participation have made the Gauteng North and SA cross-country teams. “One of them was even awarded national colours,” says Andre.

Despite this, South African athletes have still achieved remarkably at the World Champs, says Andre. This year the SA Junior Team finished seventh in the world, the senior team 12th and the senior and junior ladies were amongst the top ten. “I know the potential is there. It is my dream to see our athletes finish on the podium at the World Champs. I believe they have what it takes. We just need to allow all the different athletics structures their place in the sun.”

The South African Cross-Country Championships will be held on 11 September at the Tshwane University of Technology in Pretoria. For more info contact the ASA Office at 011 880 5800.