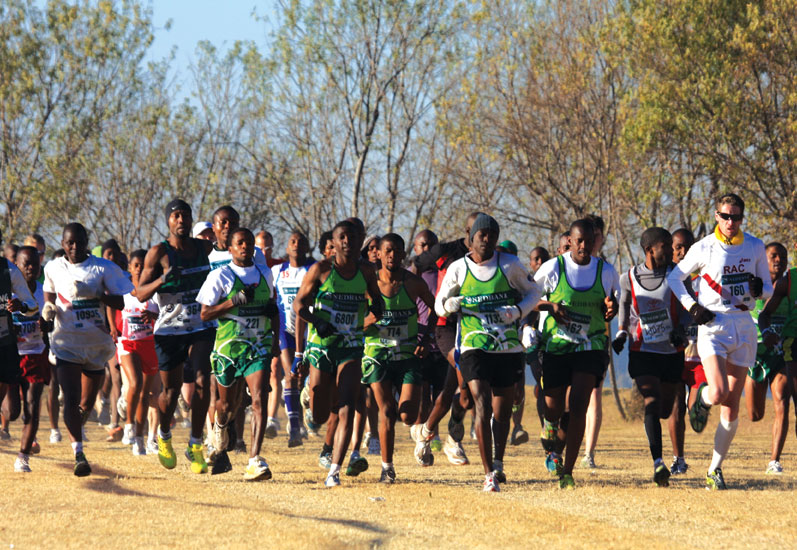 The Breakthru Midrand 15km and TIS 5km fun run saw more than 1 500 runners and walkers bracing cold weather to take on some of Midrand’s toughest hills! Despite chilly weather the race produced some fast times and new records amongst the cream of the crop. – BY DUANE NEWMAN

From the onset the men’s race was a duel between runners from Nedbank, Gauteng Striders and Mr Price. Athletes from Gauteng Striders had won this race for the past three years, so it was clear that the challenge would be whether they could make it four in a row! Gauteng Striders runner, Raphael Segodi, opened up a couple of hundred metres by the time the infamous Norfolk Hill arrived, and the Nedbank duo of Enock Maagyandi and Tumelo Motlagale attacked the leader. But they were not strong enough on the day and the Gauteng Striders runner held his lead to finish in a time of 47:38, only eight seconds outside the record. Enock came second in 47:53 and Tumelo third in 48:10, all great times on this tough course!

The women’s race was a very different affair, with some great front running by Nedbank’s Irvette van Blerk, who took honours in a new record time of 56:37, breaking Ren? Kalmer’s old course record. Melanie Joubert of Fourways was the second lady home in a time of 65:68, while Maphetang Matlakeng of Mr Price crossed the finish line in third position in a time of 66:42.

To mark the special occasion of Nelson Mandela’s 92nd birthday and the call for 67 minutes of community service, race convenor Penny Visser handed out a special award to the first runner over the line in 67 minutes. It was a close affair! The best water point was won by Mike Wood and his team from Hartwood Digital Printing. Some great spot prizes donated by Vida Promotions, Lindsay Saker Midrand and Sportsmans Warehouse were handed out as well.

A big thank you to all the Breakthru Midrand Striders who gave their time to put on a great event for the community! A special thanks to Penny Visser for all the organising she did to make it a special day.