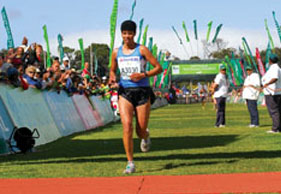 You couldn’t blame Farwa Mentoor if she admitted to being a bit tired of repeatedly being asked the same question: “Can you beat the Russians this year?” For the past eight years, since she made her ultra-marathon breakthrough in 2002 by finishing sixth at the Two Oceans and fourth in the Comrades, this question comes up at every media conference. And she always answers the same way: “I’ll do my best for my supporters and for my country.” Then she goes out and produces another gold-medal run, more often than not finishing as the first South African woman.

The question is, does all this ‘taking the fight to the Russians’ inspire or demotivate the 37 year old from the Bonitas Elite Team? Especially when the Russians, with the Nurgalieva twins usually at the forefront, once again dominate our premier ultras, while Farwa and her fellow South African runners are once again deemed not good enough by the pundits.

“It’s so easy for everyone to say these things, but they don’t know how tough it is to beat the Russians,” says Farwa. “I tried to race them in Comrades and in Two Oceans but couldn’t do it. Adinda Kruger tried in Oceans this year, and she also found it tough. So everyone is saying something is wrong, that we don’t run as well.” She goes on to say that the Russian athletes are simply in a different league right now, given that they consistently perform so well in both ultras each year, even when the races are closer together on the calendar. “It’s supposed to be impossible to race both hard – even Bruce Fordyce says that – and if the South African athletes run Oceans hard, they usually don’t do well at Comrades. We can’t work out how the Russians do it. They’re like machines.”

“So now I just concentrate on running my own race.
I’m motivated to be the first South African runner home, and I’m also motivated to run for my husband and kids, because they support me hugely and sacrifice a lot for my running.
They can’t have a proper holiday in December, because that’s when I start my Comrades training.”

ALL-TIME GREAT
While Farwa has never won either the Comrades or Two Oceans, she has quietly become one of the all-time leading gold medallists in both races. After the 2010 Comrades she moved up to joint third with nine golds, and at Oceans she is joint first on the list with eight golds. Put the two lists together and she comes out on top, but unsurprisingly, she says she wasn’t even aware of these records. “Until this interview I didn’t even think about how many gold medals I have. We all tend to think only about how many Comrades or Two Oceans we’ve run in total, and we look at the guys with 20, 30 or 40 medals as the real heroes. Still, It would be nice to have the records for the most golds.”

Farwa has also been the first South African woman home in eight of her nine Comrades, and she says the only time she was beaten by another local runner, Riana van Niekerk in 2008, she was struggling with exercise-induced asthma. “I didn’t even know I had it. I was diagnosed after that race, and the doctor told me I’d always had it, but it had steadily gotten worse. Now I take an anti-inflammatory for my lungs, which has solved the problem completely.”

There have been other races when things didn’t quite go according to plan. In the 2005 Comrades, her legs gave in near the finish, but in true Comrades spirit, she crawled over the line. “Before that I had thought it was easy to run Comrades. I didn’t know how it felt to be sore during the race – after the race, yes, but not during. It made me feel very humble.” She also had a bad run at this year’s Two Oceans. “I stopped running at 42, walked till 50, then bailed. I was just feeling so tired because I did a lot of mileage, hills and speed work just before Oceans in preparation for Comrades. We knew Oceans this year would be too close to Comrades to race it hard, so I was using it as a training run and it was easier for me to decide to bail.”

EARLY YEARS
Farwa grew up in Mitchells Plain in Cape Town, the third of seven children. She took up running while at school, inspired by watching Frith van der Merwe on television. “She was the person who made me want to run Comrades. She was almost beating the top men!” In high school, Farwa excelled in the 800m and 1500m as well as in cross-country, being crowned triple SA schools champion under the Apartheid-era sports federation for coloured schools. “I also ran in the seniors because I was fast enough, and did well in some 10km and 15km road races.”

After school, she attended teachers’ training college in Worcester for two years, where her running took a backseat to her studies. Still, she did compete in inter-tertiary meets, and is still proud of winning the 800m and 1500m against Theresa du Toit of Maties one year. “I hadn’t lost it,” she says with a big smile. Then, after college in 1996, she married Anwar, and he later became her running coach. Their first daughter, Fatima, was born a year later, and a second daughter, Kauthar, joined the family in 2000. The family recently moved down the coast to Bredasdorp, near Cape Agulhas. “We moved mainly for the kids, because there’s a lot of drugs and gangsters in Mitchells Plain. The bonus for me is that this is a perfect training area – lots of hills and nice quiet roads, and the air is much cleaner here.”

FAMILY TIME
As a full-time runner as well as wife and mother, Farwa has to juggle her running and family commitments. “With Anwar as my coach, we both have to get up very, very early! The kids have to be at school at 7:30am, so we have to get up at 4am to train and be back by 6am to get the kids up and ready.” Farwa says that when she’s not running, you’re likely to find her at home with her kids. “We don’t get a lot of time together because of the running. My husband and I have to leave them alone a lot, so when I’m not running I want to be with them. I love going to the beach or walking in the mountains with them, and watching Hannah Montana with them.”

Farwa says it is great having Anwar as her coach, and likes that running is always present in their house. “He knows me so well, and knows when I’m tired or not feeling well. He helps even more with the kids and the house when he knows I need more rest, and I can talk with him much easier than another coach.”

She normally does two training sessions a day. The morning sessions are usually 12-15km, while the afternoon sessions usually comprise hill or speed sessions. In peak mileage periods, on Wednesday mornings she does a long run of 25-35km, followed by a 12-15km afternoon run. Her running programme is supplemented by gym training, but not with weights. “I was given a pilates-type programme by my physio that only uses my own body weight,” she explains.

LOOKING AHEAD
Farwa says that Comrades remains her focus. “I still want to do well, especially next year when it will be my tenth. And I still want to break the ‘up’ record – in 2004, Elena Nurgalieva, Marina Bychkova and I were all ahead of Frith’s record at one point, so if I can just do a little bit better then I will be very happy. I know I can still do it,” she says. “Also, it will be nice to see how I will do in the veteran category in a couple of years. I hope to be running even better then, and still want to compete with the seniors. Becoming a veteran doesn’t mean the end, because in Comrades the veterans often run better than the seniors.”