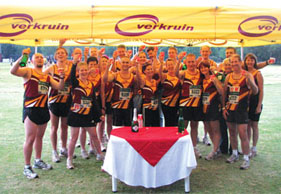 At a recent race in Pretoria about 30 members of Overkruin Athletic Club lined up at the start – and no, not scattered all over the field like most club’s members. Overkruin members stuck together in the right front corner of the field, leaving the impression that they were part of a huge club! And this is exactly how the club has been functioning since its inception in 1999, that is, as a big happy family with a huge focus on fun and participation!

Founding members, Rudi Rossouw, Rian Geyer and Johan Gnade, all originally members of Akasia Athletic Club, felt they needed a club closer to their doorsteps in Pretoria North. And so Overkruin Athletic Club was created and they found a home at the Overkruin High School.

In 2000, when Chairman Kobus van Wyk joined the club it only had eight members. “Over the years our membership grew steadily, mostly through word of mouth. We have never advertised our club because our main focus was, and still is, to keep a personal touch and family feeling in our club. Today we have 108 members, making us one of the smaller clubs  on the road,” says Kobus.

MAKING THE GRADE
Initially many junior cross-country and track athletes from the school joined Overkruin Athletic Club as it was convenient with the club situated within their school grounds. Unfortunately, over the years the number of junior athletes has dwindled, but the club still has very strong ties to the school.

Leon Marais, Deputy Chairman of the club, joined in 2003 when he was still a scholar. Today Leon also acts as the club’s statistician! “I have such a great passion for the club and for running, probably because I already joined when I was only a teenager,” says Leon.

At one stage the club had only 17 senior members, with the rest being over 40 years old. This has changed in the last few years and membership is now roughly equally divided between seniors and other age categories.

The club’s colours are the same as those of Overkruin High School, simply because the club was initially small, making it easier to utilise the same clothing manufacturers that supplied the school’s sporting clothes, Leon explains. Today the club and the school’s colours are still the same, though the design of the club’s running vests has recently changed slightly.

GREAT SOCIAL AND FAMILY ENVIRONMENT
Time trials are held every Thursday at 17:30. Members can choose between a 4km and 8km run on a route that is described by most members as tough! Make no mistake; the club has its fair share of good runners who are competitive within themselves and have their own goals. But more often than not these experienced runners make time for novices and run time trials with them, advising them on aspects such as hill running and training programmes. “To us it is about the people; it is about making new members feel welcome and part of a bigger family,” says Leon.

Every first Wednesday of the month the time trial is followed by a monthly braai. Saturdays are reserved for a club run, which is usually followed by breakfast at a nearby restaurant. Come November members let their hair down and see who can party the hardest at the annual prize-giving and year-end function. Prizes are handed out for achievements in different categories as well as to those who excelled at Comrades. This year saw 36 of the club’s members enter Comrades with 27 (of which 12 were novices) finishers. “Last year our membership grew tremendously, from 82 members to 108! I assume this was probably due to the big hype around Comrades 2010,” says Leon.

At the yearly prize-giving the club also hands out awards as part of their very own Club-500 Challenge, a similar challenge to the well-known 1 000km Challenge. Members have to clock up 500km in races over a year, something that is a bit more achievable than clocking up a 1 000km, says Leon.

WINNERS IN OUR OWN RIGHTS!
Though Overkruin members don’t regularly finish on the podium at races, they are leaps and bounds ahead when it comes to participation prizes. Most Pretoria clubs participate in an annual AGN-league where runners are awarded points according to certain times run over specific distances. Points are also earned for simply participating. The scoring system is based on a handicap system which allows clubs of all sizes to compete.

Overkruin is currently proudly ahead, an excellent example of their members’ willingness to participate! “It’s all about participation; at some races more than half of our members pitch up, which makes us very proud. You will often hear us cheer very loudly when our members finish a race and cross the line. We are a small club but we make the biggest noise,” laughs Kobus.

RACES
Overkruin hosts the Montana Crossing 10/21.1km race in conjunction with Fit 2000. When they are asked to help other clubs with the organisation of their races, Overkruin usually jumps at the chance to assist. Recently their members helped marshal at the Om Die Dam race in Hartbeespoort. “We made enough money that day to buy our own club gazebo,” says Leon.

MIXING IT UP
Though the club mainly focuses on road running, some of its members have completed the gruelling Ironman. A friendly rivalry between the ‘Iron Men’ and the road runners often leads to fun challenges such as a duathlon hosted annually by the club in August. “The Iron Men challenged us, so we decided to host our own mini-duathlon. It consists of a 4km run (on our time trial route), a 20km cycle followed by another 4km run. Sadly, the Iron Men usually win, but only because most of us compete on mountain bikes and they have expensive road bikes… and of course a serious frown that only the cyclists manage to have,” chuckle Leon and Kobus.

The club’s walking section has steadily grown. Initially only one walker joined the club. When she brought her mom and dad to join, the trio became known amongst club members as the ‘Walker Family’,” says Leon. With the closure of a Run/Walk for Life branch in the area, more walkers have now joined the club.

Overkruin has something that not many clubs can offer their members: a detailed running log that is kept especially for each and every runner! Members don’t have to lift a finger. Leon, the club’s statistician, takes great pride in keeping a detailed log of all the races run by each member. The club’s log, as at May 2010, currently consists of a total of 6 337 races and 129 369.4km run by members.

Next time you are at a race in Pretoria and you hear a bunch of runners cheering very loudly, chances are good it is the lively bunch from Overkruin Athletic Club! Walk over and introduce yourself, because they love to mingle!