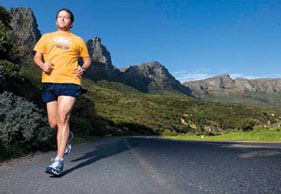 When Jonathan Kaplan was 17, his nose was broken in a rugby match at school and his mother suggested he try refereeing instead of playing, where his smaller build would not be an issue. He gave it a try and 26 years later he can look back on a hugely successful career as a professional referee, having handled some 920 matches to date (July 2010). He made his international debut in 1996 in Namibia’s 19-18 win over Zimbabwe, and in 2009 became the first in the world to pass the 50-test mark. With 61 tests to his name, he is the world’s most experienced test referee.
Jonathan says that the highlight of his career thus far has been the Bledisloe Cup game between Australia and New Zealand in 2000. “It was played by the two best teams in the world at the time, and it was one of my first major internationals. The game had a dramatic ending, with John Eales kicking a last-minute penalty to win the game for Australia, so it really tested my ability.”

There have also been a few embarrassing moments. “I get in the way sometimes. Generally, I’m bracing for it, but sometimes I get blindsided. The worst was last year in the England-New Zealand game. Some bloke took me out, but I don’t know who because I don’t want to watch that video. I don’t want to encourage people to keep doing it!”

FIT TO REF
Jonathan says he covers 8-10km in a match, with Super 14 matches being a bit quicker than most test matches. “In the Super 14 there is more running because there are bonus points for tries, but often in test matches, the game is more claustrophobic and therefore more tactical.”

To make sure he is fit enough to keep up with the players, Jonathan runs five times a week, covering between 6km and 12km at about 5min/km, mostly on the Green Point Promenade near his Cape Town home. “I prefer evening runs, and find it easier to run with other people. Some of my friends are bigger talkers, while I’m more of a listener – one friend in particular loves giving us all her news, and there always seems enough of it for an hour’s run!” he jokes.

Running to keep fit for rugby comes naturally to Jonathan, since he is a former ultra-marathoner. “I started running in the army in 1985, did a few 21s and the bug bit.” Over the next ten years he did 50 marathons and ultras, including five Two Oceans and five Comrades. “My best Comrades was when I beat Wally Hayward in 1988. I’m proud of that, because he was unbeaten in the Comrades before that! I would have gotten my Comrades green number, but I picked up a knee injury and the surgeons told me to give up serious running. Reffing was taking first priority then anyway.”

LOOKING AHEAD
This year saw Jonathan return to racing for the first time in 14 years, running a 15km relay leg in the Bay to Bay 30km in January. “My physio said, ‘Give it a try and see how it goes.’ So I ran well within myself, and I’ve done a few tens and fifteens since without any problems. My goal now is just to run pain-free.”

On the field, Jonathan has his sights firmly set on the 2011 Rugby World Cup. “It will be my last World Cup and I would love to ref the final, but I’m totally reliant on our national team, because if they get to the final, I can’t take the game! It’s a bit of a catch 22 situation…” He adds that he’d also like to ref some European games, and would like to get to 100 Super rugby games (he’s currently on 75). After that, Jonathan says he may get back into coaching – he once led the UCT under-19B team to a league title – but for now, he remains focused on the whistle, and keeping fit enough to do a good job.