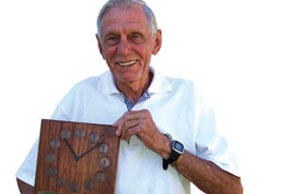 Ask Joyce Keeling about her first, long-awaited trip to Port Alfred in the Eastern Cape and she is likely to roll her eyes in exasperation before launching into a story about her husband’s absolute dedication to his running. Because while Vic refused to take her there for many years, all it took to change his mind was a road race…

“My parents got married in Port Alfred, so I asked Vic to take me there to see it. He refused because there was no race there to run. It went on for years like that! Then one day he turns to me and says, ‘We’re going to Port Alfred’, so I asked, ‘Why now?’ Turns out it was because he wanted to run the Washie hundred-miler. At first I said, ‘You can go on your own,’ but then I thought I was cutting off my nose to spite my face, so I eventually agreed to go. As I always joked, he was married to running and I was his sideline!”

Still, for all her mock indignation, Joyce was always there to second Vic in his running. Little wonder the Golden Reef Club awarded her numerous ‘Agter Elke Runner’ certificates for her many years of support.

LATE STARTER
Vic only took up running when he was 47, after playing hockey for 30 years – but he was bitten hard by the running bug after seconding his eldest son, Brian, in a race. He ran his first race at the 1975 Marits Mini Marathon 16km in the southern suburbs of Johannesburg, but says, “That was more of a trail fun run, and my first real road race was the Spring Striders 32km in 1976, which I ran in 3:44:10, finishing 864th out of 870 finishers.”

Throughout his running career he kept a meticulous hand-written record of all his races, which Brian recently added up to find that his father has finished 1 018 races, including 243 marathons or ultra marathons, which in turn included 17 Comrades and 17 hundred-milers. His total race mileage comes to 29 097km. Even now, aged 81, Vic still has clear memories of his early races. “My first marathon was the Vaal Marathon in 1977. I remember I was told by some chaps to follow the legendary Mavis Hutchinson if I wanted to finish, so I stuck with her the whole way. I finished in 4:23:20, a few seconds ahead of her.”

His first Comrades followed in 1978, the same year he helped start his beloved Golden Reef Road Running Club. “People told me to walk when I got to a hill, then run the flats and downs, but I ran everything and finished in 9:52. The following year Johnny Halberstadt gave a talk at our club, and he said he rested on the uphills – and that was when he was still running to win it, so this time I listened and ran 9:17!”

Vic went on to finish 17 of the 22 Comrades Marathons he started. One near miss saw him finish just four minutes outside the final cut-off in the big race in 2000, and he still reckons he would have made it that year if not for the congested roads. “The first ten kays took me one hour and 32 minutes. It was impossible to get going.” He also ran to halfway in 1999 and 2003, his last Comrades at the age of 74, because he enjoyed the atmosphere of the race and wanted to be part of it even though he wasn’t fit enough to run the full distance.

Another of his favourite races was the Washie, which he finished seven times, and it was his first Washie in 1981 that provided one of his proudest running moments. Having finished that year’s Comrades with Brian, the two then tackled the Washie together. “As we came over the last hill and saw the finish at the bridge, we forgot our blisters and accelerated. Then, as we neared the finish, we heard them say over the loudspeaker, ‘Here come Vic and Brian Keeling, father and son, the first time in South Africa that a father and son are finishing a hundred-miler together.’ That was something else!”

EARLY YEARS
Born in Kenilworth, Johannesburg, Vic started his working life as an apprentice fitter and turner at Consolidated Main Reef Mine on the West Rand. Along with some friends, he sent an application to the Overseas Tank Ship Corporation, and when he received a job offer, he flew to Mombasa, Kenya to join his first ship, despite all his friends pulling out. “It was my first time in the air and my first time out of the country, so I sat there asking myself what I was doing! But I had discussed it with Joyce, who was then still my girlfriend, and we decided that it would be good for me, that it would help me grow up.”

So from 1949 to 1951, Vic sailed the world, fetching crude oil in the Persian Gulf and delivering refined kerosene and gasoline to South Africa, Australia, New Zealand, Hong Kong and more. He started as a machinist, and then worked his way up through fourth engineer to third engineer before returning home, where he married Joyce and joined Blyvooruitzicht Gold Mine in Western Transvaal as a draughtsman. After two years he transferred to Rand Mines Limited, where he rose to chief engineering design draughtsman, giving the company 45 years of service until his retirement.

“I had a pressurised job, so I loved my runs
home after work, which I did twice every week. But that was not always so safe. One time I ran home from work in the dark and the gravel road had been graded that day. I stepped in a big hole where a rock has been removed and smashed my 25-year service wristwatch as I fell. Luckily the company fixed it for me and now Brian has it – and it still works!”

RUNNING BOOM
Vic started running as the Running Boom swept the world in the late 70s, so he saw the rapid growth in the sport. “When I started, the only big race was the Springs Striders 32, which had about 1 200 runners while most others were about half that size. I saw how races grew quickly in those years, and suddenly it took longer to get going at the start.”

The increase in fields saw personal seconding replaced by manned water points, which Vic still has mixed feelings about. “We lost the closeness of the personal seconds. I met seconds of other runners, especially in the hundred-milers, and the next year when you went back you’d meet the same people again. Even today I still see some of them and we still have something to chat about. I loved meeting people during events and making lasting friendships.”

“But the development of watering points was also a good thing. The roads were becoming too congested with all the seconds, especially the youngsters on their motorbikes, who were rather a nuisance because they were getting in our way. As the years passed, the watering points got better, especially in Comrades, and it is quite nice to reach water tables now and enjoy the vibe.”

Vic has seen other things change over the years, notably shoes. “When I started, a lot of the long distance runners used Tiger Ultra-Ts, which had virtually no midsole. You simply can’t believe what they used to run in! Shoes are much better these days, but I think they’re too expensive. Also, these days, people throw their shoes away as soon as the heel looks a bit worn out. I used to cut a wedge out of the heel when it was worn down and use contact adhesive to glue on a new homemade plastic heel section.”

ULTIMATE CLUB MAN
Last year Vic left Golden Reef after 32 years when he and Joyce moved down to a retirement village in Fish Hoek, Cape Town. Brian says it took him years to convince his father to make the move. “I believe my dad comes from a different era. He lived in Johannesburg for 80 years, has been married for nearly 60 years, worked for the same company for 45 years and ran for Golden Reef from its inception in 1978 until March last year. You wouldn’t believe how hard it was to get him to move!”

“My dad was a ‘routine guy’. He did the same training runs and routes on the same days and at the same times. He ran home from work twice a week; on Wednesday nights he did the club time trial, then it was long weekend runs with clubmates – the same routine for 30 years. And he wouldn’t miss a time trial. He ran more than 1 100 of them before he stopped counting. It didn’t even matter if there was a marriage in the family, he still wouldn’t miss one. And if there was a function at Golden Reef, the rest of the world could be falling apart and he would still go to the club! He is still running and has now joined Fish Hoek Athletic Club, but I think he will always consider himself a Golden Reefer.”