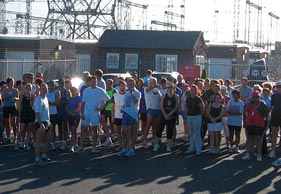 EDGEMEAD RUNNERS, WESTERN PROVINCE
Address:  Edgemead Sports Grounds, Southdale Road,
Edgemead, Cape Town
When:  Tuesday at 18:00 (winter), 18:15 (summer)
Distance:  3km and 5km every week, plus 8km twice a month
This route is as flat as a proverbial pancake and made for fast times, but newcomers be warned, you’ll need to run with somebody who knows the route because it is a winding course. You should have no problems finding a running partner, though, as the average weekly turnout is 75 runners and walkers, with all levels of fitness and speed covered.

It starts and finishes just next door to the sports grounds, at the end of Southdale Road. From the start, it turns left into Link Way, right into Salem Way, right into Settlers Drive, then left into Donkin Way, with the 1km mark halfway down Donkin. Then it’s left into Settlers again for a longish curve till you reach Bains Way. Here you turn right into Bains, pass the 2km marker, then right again into Westhoven Street for the long curve down to the turn point at the small grass ‘circle’ at Den Haag Road, which is also the 3km mark.

From there it’s back along Westhoven, left into Bains, right into Settlers (the 4km mark comes just after this turn), right into Salem, left into Link Way, and right into Southdale for the finish. The 3km runners skip the Bains-Westhoven section, while the 8km essentially combines an extra loop of the 3km route with the 5km route.

After the run, the club’s bar is opened and every first Tuesday
of the month is Club Night, with guest speakers, club awards and food on sale. Results are posted on the club’s website,
www.edgemeadrunners.org.za, and a map of the route
is available as well.

Difficulty Rating: 1 out of 5