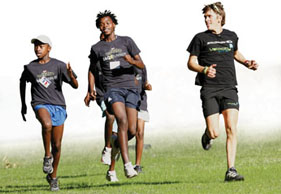 Known as the world’s best ultra marathon runner, Ryan has become a household name within the global sports fraternity whilst fellow athlete Tatum is known internationally as a top adventure racer. Both are leading athletes in their respective disciplines, and both have a strong desire to see talented youngsters achieve through sports.

The camp was made possible thanks to a generous sponsorship from Salomon and Velocity Sports Lab in partnership with the JAG Sports and Education Foundation. Each of the 26 children was given a goody bag with kit and shoes from Salomon and Velocity Sports Lab, watches and bands from Imazine, and the all important headlamps for their late night run from Black Diamond.

Starting on the first day of the FIFA World Cup™, the young runners were treated to challenges that encompassed all the soccer excitement. Ryan and Tatum created a very clever treasure hunt around the soccer theme to kick the camp off, followed by the children watching the opening Bafana Bafana match against Mexico.

On the Saturday Ryan took the kids on a 22km run/hike up to the mast on the Constantiaberg Mountain in Tokai as a teamwork exercise. Ryan and Tatum split the kids into groups – each aptly named after the Group A soccer teams – with each team having to work together and, more importantly, stay together on their run up the mountain. “It was great to see how the kids worked as a team on this run. We had the stronger guys helping the smaller girls; everyone focused on their strengths and not their weaknesses,” says Ryan.

“Many of the runners have not gone further than 5km previously so it was a great achievement for all of them to run 22km on a trail and over tough mountain climbs. Even though you could see that at times a lot of them were struggling, not once did they want to give up. They showed tremendous courage and team spirit, which is what the ProNutro JAGRunners programme is set to achieve,” says Kathleen Shuttleworth, ProNutro JAG runners programme manager.

Tatum’s knowledge of the mountains and her experience in the adventure sports industry added a great twist into all the activities set out for the kids and made them that much more exciting and challenging. “It was a real ‘feel good’ weekend. We had a load of fun and a thousand laughs! No shortage of good humour in that group, or talent for that matter,” says Tatum.

On the Sunday morning children were split into two groups headed by Ryan and Tatum for the 10km trail challenge. The faster group led the pack, marking the route for the slower group, which had to find markers and get to the finish on time. The camp finished with a feedback session from the kids themselves. What stood out the most for the majority of the kids was teamwork and learning to work together and help each other.

The camp was a phenomenal success and highlights the simple power of sport in creating a change in young people’s lives. Ryan took two kids from the camp with him to Knysna for the Oyster Festival, and to compete in some races up there with him. Niklas Dlamini and Odwa Mbangatha were chosen after showing exceptional talent at the camp. “Niklas and Odwa were the two ‘stand out’ runners at the camp, and I believe they have huge potential to develop into world-class athletes. It is great to see that they are also team players, helping some of the younger runners on the longer runs during the camp Tatum and I held,” says Ryan.

And what an adventure it turned out to be! Niklas and Odwa came first and third respectively in the shorter Salomon Featherbed Trail Run of the day. Niklas also won the DueSouth XTERRA Lite! Ryan was second overall, over the three races of the day with the second fastest time on the day.

Modern Athlete commends all involved for this great initiative and looks forward to seeing some great new talent ‘defining themselves’ in the near future.