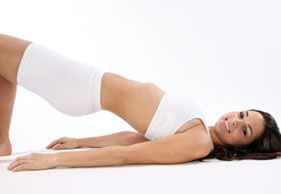 FIND THE STRENGTH
Because of muscle and postural imbalances, some muscles in our bodies have become abnormally tight and others have become very weak. This is a problem because the musculoskeletal system is the foundation of running, and any imbalances negatively affect your body and could lead to injury. Because you spend most of your time running in a straight line, the same muscles are used all the time, that is, the quads, hamstrings and calves, and others are used less frequently, such as the gluteus and core stabilisers. This can create imbalances and lead to injury and decreased running performance.

Functional strength training refers to exercises that teach the body to reduce or produce force, and dynamically stabilise the entire body during functional movements in a smooth and coordinated way. Weaknesses or lack of sufficient coordination in the core can lead to less efficient movements, strain, overuse and injury. A dynamic core stabilisation training programme is essential as a base, before commencing a functional strength training programme.

A core stabilisation programme will:
Improve your ability to maintain good postural control during movement.
Ensure appropriate muscular balance and joint control around the lumbo-pelvic-hip complex.

The core musculature is composed of 29 pairs of muscles that support the lumbo-pelvic-hip complex. These muscles help to stabilise the spine and pelvis during functional movements. When the system works efficiently, the result is appropriate distribution of forces, optimal control and efficiency of movement as well as adequate absorption of ground impact forces.

CORE CONCENTRATION
Most athletes train their core stabilisers inadequately compared to other muscles. Running alone doesn’t strength the core sufficiently, therefore runners in particular can benefit from a core stabilisation programme. The concept of quality rather than quantity is stressed. Neural adaptations become the focus of the programme instead of striving for absolute strength, which is a typical mistake a lot of athletes make. If they are not breathing heavily, sweating or feeling a particular muscle group burning then they believe they are wasting their time.

A core stabilisation programme should ideally be undertaken only after a thorough evaluation of the muscular system done by experts. This will help in assessing and identifying any imbalances.

Try performing the following exercises three times a week to maximise results, but keep the following in mind:
Begin with two sets of 15 repetitions and progress to three sets of 15-20 repetitions.
Progress to more functional exercises as control is developed. Don’t tilt the pelvis or flatten the spine.
This first stage of core stability training begins with learning to stabilise the abdominal wall. Proper activation of these muscles is considered crucial in the first stages of a core stability programme, before progressing to more dynamic workouts.

SUPERMAN WITH ALTERNATE ARM/LEG RAISES
Position yourself on all fours. Brace the abdominal wall as described above. While maintaining a mid range/neutral curve of the lumbar spine, raise the right arm and the left leg (opposite upper and lower limbs) until they are in line with the trunk, while preventing any rocking of the pelvis or spine.
The leg should be raised only to the height at which you can control any excessive motion of the lumbo-pelvic region. Then perform the exercise raising the left arm with the right leg.
Progression: A physioball underneath the trunk can provide a significantly more proprioceptive challenge.

SEGMENTAL BRIDGING
Bridging is a fundamental core stability and gluteal-strengthening exercise.
Begin the exercise on your back, with arms resting at the sides.
Activate the abdominals and squeeze the gluteal cheeks prior to initiating the movement.
Lift the pelvis and hips off the ground by gently curling or imagining that you are lifting one vertebra at a time off the floor until the hips are aligned with the knees and shoulders in a straight line.
Hold the position for ten seconds and then slowly lower the pelvis by curling the pelvis back down to the floor.
Progression: In the lifted-bridge position, while maintaining neutral lumbar and pelvic alignment, lift one foot off the ground and extend the leg still keeping both knees in line. By placing your arms across the chest, you can increase the challenge.