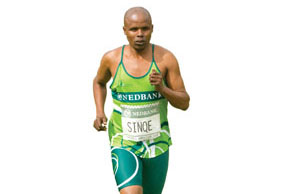 When Zithulele ‘Zet’ Sinqe lined up for the 1986 South African Marathon Champs in Port Elizabeth, he was not expected to win. Yes, he was wearing Springbok colours, awarded after he finished tied in a dead-heat SA record 62:19 with Matthews Temane in the previous year’s SA Half Marathon Champs in Durban, but he had just one marathon to his name, clocking ‘only’ 2:15:08. So imagine the shock it caused when he won in PE in a blisteringly fast 2:08:04, shattering Mark Plaatjies’ SA record by 54 seconds, setting the then fourth-fastest time ever, and coming within a minute of beating the then 2:07:12 world record!

It was no straightforward win though, as Zet had to dig deep to beat Willie Mtolo in a massive tussle that saw Willie also beat the old SA record convincingly in 2:08:15. Willie had reached halfway in 64:19 and was 71 seconds ahead of Sinqe. Zet launched an astonishing 2:52min/km onslaught and managed to catch him at the 40km mark, then surge clear for the win. “I had let Willie and Gibeon Moshaba go in the first half, but when I caught Gibeon, there was no sign of Willie, and no leading car. I asked him how he knew where he was going and he told me Willie was ahead of us, so I pushed on, using the lights of the lead car to measure the distance between us. I knew that if I caught him, I would be able to pull away.”

His superb victory saw him win the SA Sportsman of the Year Award later that year, although this did cause him some discomfort in what was then still Apartheid-era South Africa. “I think I was one of the first black men to shake hands with President PW Botha,” he jokes, “And when I came home from Cape Town some people said I should not have shaken his hand.”

TOUGH BEGINNING
Born in 1963, Zet is now 47 and lives in Krugersdorp with wife Phindile, son Siyabulele (21) and daughter Zintle (19). He works for the Nedbank Running Club as Development CEO, overseeing clinics and initiatives to bring the next generation of South African running greats to the fore – opportunities that he would have dearly loved to have when he was growing up near Umtata in the old Transkei homeland.

With his father away most of the time for work, he was largely raised by his mother, but later went to live with family in Nqobo so that he could attend school – although he could only go three days a week because he had to help tend the cattle. Being away from his parents played a big role in motivating him to start running, though. “The school selected touring teams and that gave me the opportunity to see my parents,” he explains. And he never lacked for training: “I had to walk 1.5 hours to get to school every day, and I would jog there to be on time. I was also the best wire car driver, and we would race them for many miles.”

He left school in Standard 8 (1980), as there was no more money to pay for further schooling, and moved to Prieska to find work, where he had little time for running. Then in 1983 he headed back to the Transkei, restarted school and started training himself, and soon he was regularly clocking world-class times. In 1984, he moved up to Transvaal to find work at the Goldfields West Driefontein mine, where he was employed as a recreation officer and recruited for the mine’s running team. Provincial colours soon followed, and then came his breakthrough national champs performances.

AN INCREDIBLE DOUBLE DEAD-HEAT DUEL
Incredibly, after dead-heating with Matthews in the 1985 Half Marathon Champs, the two repeated the feat in the 1987 Champs in East London! Once again, both were given the same finishing time in a new SA record of 60:11, taking more than two minutes off their previous joint record. Unfortunately for Zet, Matthews was once again ruled the winner. “I think he won because his nose is bigger than mine,” jokes Zet.

He retained his national marathon title later that year in Stellenbosch, winning in 2:10:51 after once again surging away from Willie (2:11:01) in the last kay. This saw him selected for a national squad to compete in an international meet in Rome, but he was to be denied by the international sporting boycott enforced on South Africa due to its Apartheid policy. “When we got there, we were not allowed to race, and I found it demotivating to come home to races where there was little competition, so I quit running.”

Zet soon returned to training, though, as South Africa began its return to the sporting world, and when he finished second in the 1991 SA Marathon Champs, he was selected for the 1992 Olympic Games. “I thought I could beat the best in the world, but a back problem affected my hamstrings and I had to bail just before halfway. When I came back from Barcelona, I realised I could not run as well as I had before, and I thought my racing days were over.”

UP TO ULTRAS
A few years later, Zet decided to give ultra-marathons a try, even though he didn’t think too highly of them. “I used to think of Oceans and Comrades as races for retired marathoners,” he now jokes. “I thought it would be easy to win them, because I could easily go under 3min/km in a 21, while the guys were only running 3:30s in Oceans or Comrades.”

Semi-retired or not, he won the 1996 Two Oceans in 3:09:45, then came back a year later to defend his title with an even faster 3:07:17. He followed that up with a gutsy fourth in the 1997 Comrades, clocking 5:33:18 after a huge battle with Nick Bester and Charl Mattheus – but he says his lack of experience cost him that day. “I ate too much before the race, then couldn’t drink enough water during the race because my stomach was too full, which led to cramping and three trips to the bushes. Later in the race, I sensed that Charl and Nick were laughing at me. After the race I asked them what they were saying, and they told me I was lifting my legs too much, like I was running a 10km.”
Zet was second in the 1998 Two Oceans (3:13:11), then returned to Comrades in 1998, determined to go for the win, but with 10km to go and lying ninth, he bailed due to ongoing problems with his legs. “I don’t regret bailing. I had always been a winner in all the distances I had raced, but Comrades was just too long for me. After that race I quit running.”

NEXT CHAPTER
Comrades may have killed Zet’s competitiveness, but it ignited a desire to help with the development of running – and gave him the ‘foot in the door’ to achieve that. “I got more recognition for finishing fourth in Comrades than I did for my 2:08 or 60:11, and the work offers I got from Harmony and Nedbank are due to that result.”

This work initially saw Zet operating as Central Gauteng Development Coach for the now defunct Harmony Athletics Club, and in 2008, when Nedbank took over the Harmony Club, Zet was appointed National Development Manager. It’s a role that has seen him do much valuable work to promote the sport at grassroots level, but he still wants to do more. “We are doing well in the cities and townships, but look at guys like Ramaala, Sepeng and Thugwane – they come from deep rural areas. If we can go out there and give as much support to those promising youngsters, we can change running in this country.”

He also serves as Vice Chair of the Central Gauteng Cross-Country Commission, and is a Director of the Sport Heroes Walk Against Aids initiative, which takes sports stars from town to town to help educate the youth about the dangers of HIV/Aids. “We’re working closely with the departments of Health, Education, Sport and Correctional Services, so I believe we’re making a big difference.”

Zet still runs 10km a day, but doesn’t race anymore. “I just want to be in shape to motivate my athletes – and to keep up with my daughter! She is a good runner and often asks me to go with her for training runs, and I don’t want to get beaten by too much!”

When asked what running means to him now, Zet thinks for a moment before answering. “My schooling was limited, but through running I have managed many things, and hope to achieve many more. Running has made my life.”

*
11th fastest overall time ever by a South African, as Thys (4), Ramaala (3) and Syster (2) have gone faster on more than one occasion.