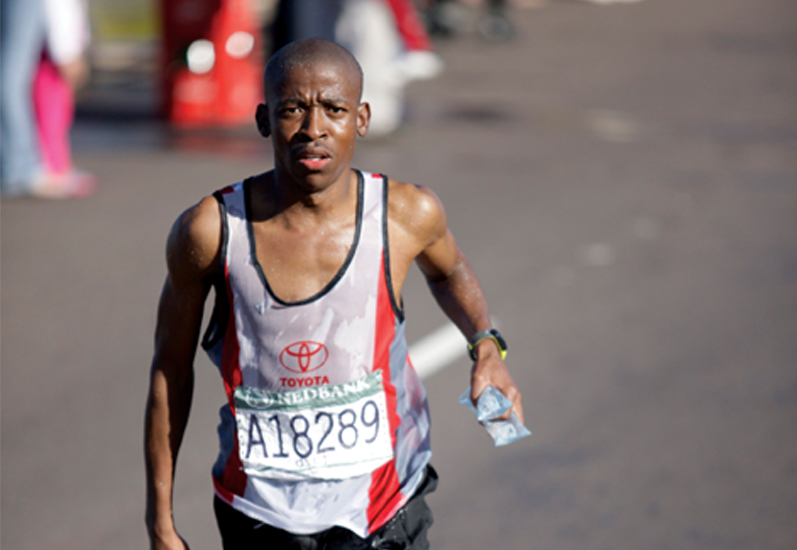 They are the new faces on the block and judging by their phenomenal performance at Comrades 2010, it is clear that Team Toyota will be a powerhouse to be reckoned with in future! – BY MICHELLE PIETERS

South Africa’s top selling car manufacturer, Toyota, has recently thrown its weight behind SA road running as a sponsor of the Comrades Marathon, and has established a new elite section of Team Toyota running club. This is great news for our sport and we welcome Toyota with open arms as they contribute to the growth and upliftment of the great discipline we all love.

THE START OF SOMETHNG SPECIAL
Team Toyota, which consists of about 90 recreational athletes, decided shortly before the 2010 Comrades Marathon to expand their team by establishing an elite section. John Hamlett, one of the country’s most well-known and experienced Comrades trainers, was appointed by Toyota as coach.

Many of these brilliant runners, some with top-class marathon times under their belts, were training without any sponsorship whilst some were living below the breadline. Toyota’s sponsorship therefore not only makes it possible for South Africa to develop running talent of this calibre, but also helps these runners live a better life.

MEET THE TEAM
The small elite team produced some incredible results for Toyota for their very first outing, with two golds and some fantastic finishes. We meet the first members of what is sure to become a powerhouse team in years to come:

Fanie Matshipa
Fanie, who has a 2:20 marathon time under his belt, led the race up until the 60km mark. He set the pace forcing key contenders to chase him and even caught the early rabbit Charles Tjane. The real fight for Fanie began at 60km not only with his fellow competitors, but also within himself as he started to fatigue. Fanie managed to hold on to finish in a brilliant fifth position in a time of 5:39:53.

Lindsay van Aswegen
Lindsay, the only female runner in the team, produced a fantastic result, finishing eighth
(and second South African women home) in a time of 6:46:52. Lindsay, who has won gold twice before, is proving that even at the age of 42, she is a top contender. With a marathon PB of 2:57, Lindsay bettered her previous best time (7:08) by more than 20 minutes and accomplished the rare achievement of running the second half of the race ten minutes faster than the first half. Coach Hamlett believes she is still capable of going 20 minutes quicker and eventually challenging the Russian twins.

Gift Kelehe
Gift, brother of the 2001 Comrades winner Andrew Kelehe, has always lived in his brother’s shadow. But those days seem to be in the past as police officer Gift is slowly starting to make his own impact on the South African running scene. He finished 16th male in a time of 5:53, a brilliant performance considering his training suffered a little when he went on a course during the key training months of January and February.

Frans Chauke
Frans has always been known as ‘the rabbit,’ setting a blistering pace in many races before finally blowing. This year Frans committed to a ‘smart’ Comrades and in the process, improved his previous down Comrades time by 20 minutes. He finished in 6:04 in 28th position overall. This has inspired Frans, an Oceans and Comrades gold medallist to such an extent that he has now set his eyes on a Comrades win.

Andrew Kelehe
Andrew, the 2001 champion and holder of ten gold medals, also ran as part of the Comrades Legend’s challenge and finished ahead of fellow legends, such as Bruce Fordyce and Shaun Meiklejohn.

White Modisenyane
White refers to himself as ‘the old man’ of the team’s training camp. He is a chef and had to work hard to fit his training in, as he was on a work course from February to April. White managed to finish 89th male in a comfortable 6:33.

Joseph Maerman struggled with injuries during the team’s training camp but still managed to produce a silver medal. Joseph, who does not specialise in Comrades, improved his previous Comrades time and finished 92nd male in 6:34:19.

Lucas Raseruthe
Lucas, who has finished in the top ten before, suffered from shin splints this year and finished in a disappointing 9:02. He vows to be back soon!

LOOK OUT FOR THEM
Team Toyota has a large contingent of amateur athletes and this will be the feeder group from which some athletes will move into the pro-teams fold. Other talented and upcoming young runners in the team to look out for are Drew Fischer and William Mokwalakwala.

“Team Toyota is set to grow in the next three to four years. Two gold medals in their first outing shows Team Toyota means business and that they are here to stay! As coach I certainly see several gold medals and many new faces wearing the Toyota kit coming in the top ten at Comrades. Watch this space,” says Coach Hamlett.