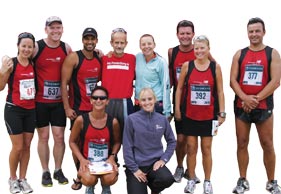 More and more runners are moving into the multisport arena and giving duathlons and triathlons a go. Unsurprisingly, some running clubs are now establishing multisport sections to cater for this new market, but the New Balance Multisport Club has taken things to a whole new level – and their rapid growth from 40 members to 600 in just two years is proof that they’re doing things right! – BY SEAN FALCONER

In 2007, when Harmony Gold Mines pulled out of road running, there was much uncertainty amongst the former Harmony Running Club members. Many joined the Nedbank running clubs that replaced the Harmony clubs, but some athletes decided to look at other options, including a group in the northern suburbs of Cape Town led by Jasper Coetzee.

At the 2008 Totalsports Challenge multisport event, Jasper approached New Balance CEO Gary van Rooyen about the possibility of starting a new club that would cater for more than just runners. “Two weeks later I presented a concept to Gary and he said yes right away,” recounts Jasper. “We started developing things from there. Clive Idas helped me put the groundwork together, Ri?l Hauman wrote our constitution, Chris Theunisen joined as treasurer, and along with the people at New Balance, that was the core group that got things going. That August we held our first AGM and the club was officially formed, covering five disciplines: running, cycling, triathlon, canoeing and swimming.”

The club now has about 600 members, ranging in age from eight to 66. This number consists of roughly 300 runners, 50 triathletes, 150 cyclists and 50 canoeists, all in the greater Cape Town area. “The Eden AC club in Wilderness also changed its name and joined us, bringing another 50 multisport athletes to the club, and we’ve got 30 cyclists in Kimberley,” says Jasper. “We don’t look for branches elsewhere, but welcome people to join us.”

STILL GROWING
“The biggest group in the club is the runners, and by the end of the year I suspect we’ll hit 350. When we started in 2008, we only just had the minimum of 40 to start a new club in the Western Province, but in two years we have grown remarkably. We thought after this year’s Two Oceans it would slow down, yet we’ve still got a steady stream of new members coming in, many of them beginners.”

The cycling section includes many top riders. Most ride for sponsored teams and thus you won’t see them in club colours. “We have the three Daikin-Gu teams, the Cape Town Market and Capestorm teams, the Durbell Pharmacy vets’ team, the Orbis masters’ team, and the Flandria team that won the male team prize at the Argus,” says Jasper. In mountain biking, the club also has top names on its books, including Brian Strauss and his children Mariska and Stefan, who were all SA champs at the same time a few years back. “I’m really chuffed that we have so many top riders who support the club,” adds Jasper.

He says the triathlon section is growing at a phenomenal rate, but the swimming section is dormant at the moment, mostly
due to a lack of facilities, especially heated pools for training during winter.

The canoeing section is based at the Tygerberg Waterfront, where the club has sole rights to use the dam for its training, Tuesday time trials and competitions. There are storage facilities for the boats, and the coffee shop at the jetty is a good place to meet before and after a paddle, says Jasper. “We have an established core group and a steady influx of beginners. We recently held our first Night Dam Dice under a full moon, which was an exciting development.”

CROSS-POLLINATION
“I think we’re very different to other clubs – we’re more a virtual club, because of the different sporting codes and the wide area we cover, so e-mail communication is important,” says Jasper. “These days I send out a weekly e-mail newsletter to more than 630 people.”

“We believe that over the past two years we’ve made a major contribution to the growth of sport in the Western Cape by bringing in so many beginners. We also have an amazing cross-pollination of sports – many of our cyclists have started to run, and we’ve got a lot of hardcore runners doing cycling, duathlons and triathlons. Some of the paddlers are now trying their hand at running and riding as well. But at the heart of it, we’ve helped grow running by providing a home for athletes of all levels.”

Of course, with many athletes in the club trying out new sports, it inevitably leads to some funny moments. Like when Riaan Taylor did his first triathlon last year and found that he was getting really hot during the cycle leg. He stopped to try and cool down a bit, and took off his helmet – and then realised he still had his swimming cap on!

The club’s home is at the PP Smit grounds, where they share a clubhouse with the Bellville Cricket Club, including bar and braai facilities. Club functions are regularly held there, and the club has also invested in a trailer to take its bright red gazebo to races, so members can meet up for a post-race chat.

With so many diverse disciplines covered by the club, the official club kit has to be equally diverse. They started with generic red New Balance vests, but today can offer the members cool running, cycling and triathlon-specific gear, all available at the
Tri Shop in Durban Road. “Many people say they join us just
for the kit,” says Jasper, “And we think that is quite a feather
in our cap.”

DIFFERENT APPROACH
An important aspect of the club set-up is that no money incentives are paid to members. As Jasper puts it, they don’t buy members. “We do give rewards and recognition to our top athletes, but in the form of medals or t-shirts, or a New Balance voucher. Still, our athletes have done well, with juniors Lianda De Bruyn and Sume Matthysen both earning provincial colours in cross-country, and senior Ulrica Stander being selected for the WP Half Marathon team for SA Champs.”

“The development side is also important to us. We have an association with Durbanville Children’s Home, with the kids joining us for training runs, and we sometimes take them to short races, including the cross-country meets. We were so excited when one of the kids’ teams won their category at the Paarl meet.”

TRAINING TIMES
The club offers two weekly running training sessions on Tuesday and Thursday evenings at the PP Smit Sports Grounds, varying between speedwork, fartleks, hills and pyramids. The sessions are done mostly on grass and all levels are catered for, with slow, medium and fast groups led by experienced team leaders to set the pace and show the route, which is determined by club coach Dudley Hulbert. “I think we’re the only club in the Cape with a proper coach,” says Jasper. A second training group has recently been started in the Blouberg area, focusing on beginners, and the club wants to start a similar group in the southern suburbs area, but still needs somebody to drive it.

The monthly 5km time trial is run on the last Tuesday of the month, also from the sports grounds. On Wednesdays the club’s trail running group meets at Magic Forest, and Sundays are reserved for long pack runs of up to 30km, with a route that allows runners to branch
off at 10km or other intermediate points if they want to go a
bit shorter.

The club’s triathlon training group is driven by experienced triathlete Douw Steyn, who sends out great technical and training mailers, says Jasper. In the cycling section, many of the semi-professional teams train on their own, but there are still plenty of training groups for social riders, and club member Leonardo van Onselen is available for coaching.

CLUB RACES
Given its multisport approach, it’s no surprise that the club puts on a quite diverse selection of events. In running, there is the Takkie 10km in September, which is organised as a fundraiser for Jan Kriel School in Kuilsriver. In cycling there is the Contego Critereum circuit race, although it has had to be postponed this year due to the Soccer World Cup.

The club also presents the Applethwaite Duathlon in June,
an on-road event starting and finishing at the Applethwaite farm near Grabouw, which also plays host to the Applethwaite Off-Road Triathlon in November. “The farm has a stunning 1.2km long lake for the 600m swim leg, then the athletes do a 18km MTB ride through the apple and pear orchards, followed by a 5km run in the orchards,” says Jasper.