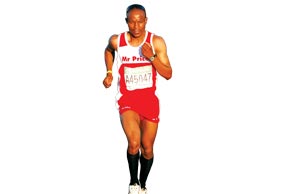 MEET THE ELITE
BY DONALD MATHIPA

His running career started in 1999 when he ran in the colours of Esselen Park Athletic Club. Little did he know back then that one day he would be one of the most talked about novice athletes at Comrades 2010. Running must be in Ludwick’s genes; he is the grandson of Titus Mamabolo, well-known runner of the 70s and 80s.

Ludwick, a former soccer player, grew up looking after his parent’s livestock in Limpopo. He has come a long way since then and currently works as a bank teller
at Absa, and is studying towards his chartered accountant degree.

He has competed in several road races over the years; prior to Comrades 2010 one of his biggest successes came in 2009 when he placed ninth at the Two Oceans Marathon, crossing the line in a blistering time of 3:14. This brilliant performance was a deciding factor in him tackling Comrades for the first time.

TRAINING
His training leading up to Comrades included speed work, either on track or on gravel road, an hour of tempo running, hill repetitions and a weekend long run. He did all his track sessions at Midrand High School and Barnard Stadium in Kempton Park. Titus believes part of his strength comes from doing his long runs of three to four hours on gravel roads. These runs were done at a relaxed 4min/km.

LOOKING AHEAD
Ludwick’s short-term focus is competing at the cross-country league meetings in Central Gauteng before he starts preparing for the City to City Marathon in September this year. He is grateful to Mr Price Athletic Club for their sponsorship, which allows him to train
as a professional athlete and make his dreams of achieving podium positions at big races come true.

His recipe for success in training and in life is to always find a balance. He believes in spending just as much time with his family and friends as he does studying and running.

His biggest dream is winning Comrades and he plans to give it his all at next year’s up run!