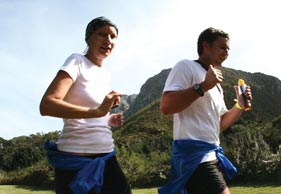 PRONUTRO AFRICANX TRAIL RUN
Sometimes running a certain race goes far beyond the physical challenge. For some it is an emotional journey of dealing with past losses. Marietta Bester, whose best friend and running buddy was killed by a car, shares her AfricanX running journey with Modern Athlete.

A TRAGIC LOSS
In the beginning of 2009 my friend, Sanet Wentzel, and I decided that at least once a year we wanted to do something different, other than road running. Sanet suggested that we run the ProNutro AfricanX Trail Run in 2009. We had an amazing time and were highly motivated to do it again.

Sadly on the morning of 7 November 2009, while doing her morning run with a friend, Sanet was run over and killed by a car. The driver was allegedly drunk. Sanet was my best friend and training buddy. We had so many exciting adventures planned for the future.

RUNNING FOR SANET
The week before her death we had discussed running the ProNutro AfricanX Trail Run in 2010. She was very excited and had already started planning our training.

A friend who was with her at the time of death told me the last thing she spoke about was the ProNutro AfricanX Trail Run. That motivated me to carry on doing all the things that we had planned. I wanted to dedicate the AfricanX to her because I did not want my friend to be forgotten. She was a wonderful person and she left a legacy to all runners by being so dedicated to the sport.

NEW FRIENDSHIPS
Finding a partner was not easy at first and I was worried that I would not be able to find someone who was committed enough to train with me. Luckily I found Carel Lotz, a dedicated and amazing person. Carel and I did a lot of hill running and off road running around Oudtshoorn. We trained every day except Fridays and Sundays.
We did long runs every weekend.

RACE DAY
After our race briefing we were taken to the start in buses. The weather was perfect for running. The first stage was beautiful, especially through the Botanical Garden.
Once we ran over the mountain the trail run got very technical. Carel was so supportive
and patient!

The last part of stage one next to the Palmiet River was incredibly beautiful! Nearer to the end I felt so tired and it was a joy to finally reach the finish line.

THE LONGEST DAY
The second day was the longest stage (42.2km).The first part of this stage was quite easy, but we encountered some difficulty alongside the river. From the 20km mark it was tough going. A never-ending climb up a mountain felt like it was just going on and on. Needless to say it was a relief to reach the mountain top.

Physically I was exhausted and because of that I fell. Luckily I did not injure myself seriously. Emotionally I also took strain and I got to certain stages where I just wanted it to be over, but then I had to find that part inside myself that would carry me through.

On my own I could not have done it. It helps enormously when someone is there with you, going through the exact same thing. Then you become more than team mates; you are helping, supporting and motivating each other. I have enormous respect for Carel. The second day was tough but it added to my life experience. Crossing the finish line was emotional and I wanted to cry.  I felt joy and sadness. In my heart I knew Sanet was there with me every step of the way.

HONOURING A GREAT WOMAN
At prize-giving that evening there was a special award,
‘The Sanet Wentzel Spirit Award’ that was given to a runner who had overcome difficulties in life. The award was given to Jurg Knorr, whose father recently passed away. I felt so proud of my friend Sanet and eternally grateful to the organisers for honouring my special friend. Now I know her spirit and dedication will never be forgotten!

Unfortunately the last day was cancelled due to the bad weather.

LOOKING AHEAD
My next challenge is the Knysna Forest Marathon on 10 July. It will be my first and I am really excited. Next year I want to run my first Two Oceans 56km and of course tackle the ProNutro AfricanX Trail Run again.

Sanet’s favourite saying was, ‘Life is good!’ She loved champagne and celebrated even the smallest things with a glass of bubbly. She was a remarkable person and enriched my life in a powerful way with her energy and spirit.

She would not have wanted me or others to be sad all the time. She would have wanted us to be happy and enjoy life. I miss her every day and wish she was still here so that I could talk to her. Her spirit is with me every day and whenever I encounter difficult situations, I think of my friend who was such an optimist and who always saw the positive side. I am forever grateful to have known such a person.