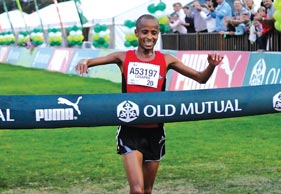 aving run some of the fastest times by a South African in 2010, Lusapho April is quickly becoming a top international runner, but it’s not just talent that is taking him places.
It’s also his measured approach to racing. What little he does, that is… – BY SEAN FALCONER

In South Africa it is an unfortunate trend that fast, young athletes are invariably drawn to the ultra-marathons – because that’s where the big money and television coverage are to be found. Even if these athletes don’t go in for the ultras, they often over-race every weekend while chasing the relatively small prize purses on offer at most local races. This invariably leads to either injury or burnout, and many of them never live up to their full potential.

It is therefore most refreshing to listen to Lusapho April speak about his future running plans. In a nutshell, if it isn’t fast and flat, the 28-year-old, full-time athlete from the Eastern Cape simply is not interested. And nothing further than the marathon! This is an athlete with the determination to follow the path that few South African runners have the patience to stick to – like the mega-successful Hendrick Ramaala and Elana Meyer, both of whom have won fame and fortune on the international stage without ever running an ultra… or racing every weekend.

“I can easily train for three months without racing, and I will only run races if there are good courses for fast times,” says the softly spoken but eloquent Lusapho. “I don’t want to run myself into the ground, and won’t make the same mistakes so many other runners have made.” Clearly it’s working for him, because at the time of this interview in early June, he had only run four races in 2010 – and all of them saw him win the race or post a personal best, list leader or an SA record!

WHAT A YEAR
It started in March when Lusapho ran a PB 43:50 for 15km in Port Elizabeth, and the fastest time so far in 2010 by a South African. Then at the beginning of April he won the Old Mutual Two Oceans Half Marathon, clocking 1:03:54.
“It felt good to finally win Oceans, because I’ve been trying for three years. In 2008 I should have won, but I stopped under the first banner in the finish straight because I thought I was finished, and the second guy came up fast and I lost the race by one second. Then in 2009, Stephen Mokoka outsprinted us in the last kay, but this year was mine.”

In May Lusapho headed over to Germany to run the TUIfly Hannover Marathon and came home with a fifth place and 2:10:44 finish, knocking a big chunk off his 2:14:19 PB set on the same course in 2009 in his debut marathon, and running
the fastest marathon so far in 2010 by a South African. According to his coach, Karen Zimmerman, Lusapho ran comfortably with the leaders up until 37km, but then dropped slightly off the pace, “So we’ll work on a stronger finish for his next race.” Still, he says it is the highlight of his athletic career thus far. “In my first marathon, I didn’t really crack it with the distance and I had problems with cramps, so this time it went much better.”

A week later he broke Mark Plaatjies’ 20-year-old SA record for 25km in Berlin, clocking 1:15:02 to finish tenth in a fast race
that saw both the men’s and women’s world records smashed.
“We decided that since I was in Germany anyway, I should grab the opportunity and see how it goes. I felt good and decided to race it, but I didn’t know about the record until later.”

FAMILY TIES
Lusapho was raised by his grandparents in Addo, near Port Elizabeth, following the death of his mother when he was just a few months old. His father, Lindisile Jonas, lives in Uitenhage with his wife and six other children. Lusapho is the eldest of Lindisile’s children and has two step-brothers and four step-sisters. He now lives part-time with his aunt Phindiwe April in Uitenhage when not training in Hogsback.

“He is close to his family; they are very important to him and he appreciates their support and understanding in pursuing his goals,” says Karen. “He is
also close to my husband Perry Beningfield and I, and we
have supported him since 1997. He lives and trains with us at Hogsback at altitude when not in Addo or Uitenhage. He’s been living there since the beginning of 2006, although he’s been training there every year
since 1999.”

Lusapho started running in Grade 7 and was soon selected for the Eastern Province under-13 cross-country team. Two years later he started training with Karen and joined her Atalanta Athletics Club training group in Port Elizabeth. She later became head coach at the University of Fort Hare, where Lusapho enrolled for a BA in Human Movement Studies. While there his athletic career really took
off and began dominating his programme, so he did not complete his studies, but hopes to do so once his international career is over.

According to Karen, “Lusapho works very hard towards his goals and follows a healthy lifestyle. He is a vegetarian, takes vitamin, mineral, carbohydrate and protein supplements, doesn’t smoke, drink alcohol or take drugs, gets enough rest and doesn’t
over-race.” That has seen him build up an impressive running
CV. He is a multiple Eastern Province and Border champion at junior and senior levels in track, road and cross-country, was South African Junior Half Marathon Champion, has won
multiple national SASSU student championship titles in track, cross-country and the half marathon, and has medalled at the
SA Junior and Senior Track & Field and Half Marathon Champs.
He has represented his country ten times at various levels over the years (see Proudly South African, below).

DISAPPOINTMENTS
Lusapho is riding the wave of success right now, receiving more invites to high profile overseas races, but in recent years he has suffered some setbacks too. “I wanted to try for the Olympic marathon in 2008, and had been invited to run in the Netherlands where I hoped to qualify, but a month before the race I tore my Achilles tendon in training.” Another disappointment followed in July 2009 when he was kicked out of the national high altitude marathon training squad. Karen didn’t agree with the training programme of a visiting Kenyan coach appointed by ASA for a training camp, and was told by ASA that, after 13 years as Lusapho’s coach, she was no longer needed. Then Lusapho picked up an injury after the SA Half Marathon Champs, where he finished third South African, and did not return for the second part of the training camp.
ASA wrote to him, labelling him lazy and ill-disciplined, and said he would never be selected to represent South Africa again.

“After the injury and the problem with the training camp, I was just not interested in running. Some people even referred
to me as the ‘dead man of running’.
But in 2010 I decided to let my legs do
the talking and made a big comeback,” says Lusapho.
He hasn’t been called up again by ASA since then, but hopes that his times will secure his return to the national team.

FUTURE GOALS
“The London 2012 Olympic marathon is my big target for now.
I don’t like running in extreme heat, and next year’s World Champs will be in Korea, which means they will be hot, so
I’m not really keen on going, but I will see closer to the time.
I would definitely go to World Champs if it affected my selection for London.”

“My other big goal is to run the Big 5 marathons. I want to do London first, then Chicago or Berlin. And in the half marathon
I would love to run in Lisbon and Berlin, the really fast ones.
And the Seven Hills race in Netherlands, where the world record
was run – even though I don’t know where the hills are supposed to be, since they ran the record there!”

One thing that Lusapho is adamant about is that he has no interest in moving up to ultras at any time. “I have no aspirations in Comrades. As soon as my international career is done, I will stop running and spend more time with my family. They often tell me to do something else with my life, but this is where I want to be right now. I also want to finish my studies, so that I have something to fall back on. Of course, it will depend on how well I do with my running. If I do well, I plan to open a business that will generate income for myself.”

Given his success thus far, his fast times and his measured approach to racing, it looks likely these plans will someday become reality.

Proudly South African
Lusapho April has represented his country in a number of international competitions, often finishing as the top-placed South African: