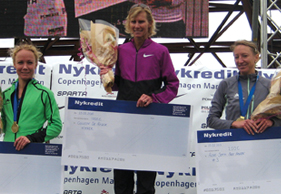 There are very few athletes who can boast of competing at four consecutive Olympic Games, and not many people know that South African-born Colleen De Reuck has done just that! What makes her achievement even more special is the fact she was already 28 at her debut Olympics. She competed in the Olympics from 1992 to 2004 and today, at the age of 46, she is still competing at the highest level, clearly defying age. Last year she came second in the USA Marathon Champs and in May, the blonde mother of two won the Copenhagen Marathon! She has her eyes set on making the Olympic Trials in January 2012 in Houston and potentially, a fifth Olympics. – BY MICHELLE PIETERS and MIKE BRAY

The one question Colleen De Reuck gets asked more often than the questions about her glorious sporting career, is how she has managed to stay competitive for so long. After all, this is a woman whose world-class running career has spanned over more than 20 years.

What makes Colleen’s Olympic achievement even more amazing is the fact that she accomplished this representing two different countries. She was on three Olympic teams for South Africa between 1992 and 2000, and in 2004, was part of the all powerful United States Olympic team after getting her USA citizenship. She qualified for Team USA after winning the 2004 United States Olympic Trials Marathon a week before her 40th birthday!

Over the years she has achieved world-record times in the 10 mile (16km) (51:16) and 20km (65:11), and has competed for Team USA in the World Cross-Country Championships in Ireland, winning a bronze medal.

One can’t blame anyone who is desperate to know the secret to her longevity. There are not many female athletes who can win a big city marathon in a time of 2:30:51, especially at the age of 46. Colleen’s answer to this question is always very simple and modest: Enough rest, recovery and taking time out from running a few times a year keeps her fresh. But most importantly she always puts her family first. She believes running is part of enjoying life, and not her whole life.

EARLY BEGINNINGS
Born in April 1964 in Vryheid, KwaZulu-Natal, Colleen grew up loving sport. She started running in Grade 8 and got her genes from her Dad, also a runner. Father and daughter were often seen out running together in these early years.

Colleen’s lifelong love for cross-country started at school where she ran cross-country in the winter and track in the spring. Today cross-country running is still her passion and she enjoys tough courses that allow her to test her strength and switch pace continuously. At the tender age of 16, Colleen tackled her first half marathon and beat the top local runners in the race!

IT ALMOST NEVER WAS…
As was the case for many South African athletes in her era, Colleen ran pretty much in isolation. In 1983, at the age of 19, she received Springbok colours in cross-country, the first of many to follow. One of her earliest career successes came in 1990 when 26-year-old Colleen broke the SA record in the half marathon in a brilliant time of 68:38, one of the top five fastest times for the women’s half marathon in the world.

Colleen was almost ready to retire, until South Africa was again included in the international arena. It was the inspiration she needed to continue and she made her first Olympic appearance at the 1992 Barcelona Games, finishing ninth in the marathon. One of the fondest memories of her prime years is by far travelling to races around the country and the world, says Colleen.

She met Darren, her husband, coach and agent in 1983 in college. They were married in 1988 and in 1993, moved to the USA. Colleen made her second Olympic appearance in the 10 000m at the 1996 Atlanta Olympics, taking 13th place, and represented South Africa for a third time at the Sydney Olympics in 2000.

These weren’t always happy times for Colleen. At the time of her second and third Olympics, she was already living in the US and South African athletics bosses disapproved of their athletes living overseas. She had to fight her way into the Olympic team, one of the biggest disappointments of her career. “The way the athletic federation treated me when I was living in the States was disappointing. That is why I eventually decided not to compete for them. The South African federation told me that they would never pick me for another SA team, so I decided to just do my own running events that I loved, and later became a citizen of the States as we were now living here and had kids here.” On 11 December 2000, Colleen De Reuck officially became an American citizen.

CAREER HIGHLIGHTS
Her Olympic appearances are by far the most memorable moments of her running career, says Colleen. “It was just magical. When we were allowed back into international competition, it was like a dream come true. The 1992 Olympics will always be special as it was the first time we as South Africans were back.”

She was not over the moon about her performances though. In 1992 in Barcelona she had runner’s knee and in Atlanta, her racing had not gone as planned. In Sydney it was going to be her year and Colleen was hoping for a top five finish, but only two weeks before the event she got injured. She ran the marathon with a local anaesthetic in her foot, and sadly, finished 30th.

There were some lighter moments too. “In the 2004 Olympics we finished the marathon in the original stadium in Athens. It was a track that had long straights and very sharp bends. It was the first time my daughter, Tasmin, came to the Games, and I was looking for her in the stadium. Before I knew it I was in the outer lane as I was not used to the tight turns!”

TRAINING
In her prime years (31-35) Colleen ran 120-160km a week, depending on the season. She did three hard workouts a week, a mid-week longish run and a Sunday long run. “Mostly my workouts were on the trails or road, very few on the track. I love fartlek of varying distances and did lots of tempo runs. I lifted weights twice a week and started Pilates once my daughter went to school, as I had more time then.”

Today her training is not is not as scheduled as before. “Now I am smarter. I listen to my body and will quit a workout if I am not feeling well, instead of pushing through it. The training fits around my other schedules now. I still try and put in the hard workouts, but it is now only two a week as I find I need more recovery days.”

She still tries to put in three double runs. “I also try and clock up a few weeks of 150-160km a week leading up to a marathon. I try and lift weights twice a week, but somehow that always does not work out due to time issues,” says Colleen whose favourite distance is the half marathon, despite her success in the marathon.

LIFE IN BOULDER
Colleen, her husband, and their two daughters, Tasmin (15) and Tara (3), live in Boulder, with their dog Shaka and two cats, Snuggles and Lucy. Unlike her mom, Tasmin does not enjoy running and prefers volleyball.

“Boulder is a small enough city which is great. Here are so many Olympians and world record holders in plenty of sports. There are also plenty of trails to run on which are totally safe, bike paths to get around town and most of ‘Boulderites’ are outdoor people who lead fit and healthy lifestyles.”

When she’s not running, her two kids keep her so busy that there is very little time for herself. “I actually did a course in personal training at the end of last year, so now I’m qualified. When I’m done with running, there’s nothing better than to help others who’d like to get into shape.” Colleen and her husband are also involved in the coaching of runners and triathletes, as Darren has his own business coaching the average runner.

And yes, she certainly misses South Africa and tries to visit every three to four years but Boulder is where her life is now. She simply loves the free lifestyle it brings.

THE VOICE OF EXPERIENCE
She believes the biggest change in running is the amount of female runners who have come into the sport, both serious athletes and casual joggers alike.

Are there any words of wisdom that she would have appreciated back then? “Listen to the more experienced runners!” The biggest mistake most runners make is that they don’t take their easy days easy enough, says Colleen.

Her advice to anyone who is thinking about starting running is to start slowly with the correct shoes and cross train to remain injury free.

Her goals are to keep fit, in shape and run for many more years. In January 2012 she is set to try and make it to the Olympic Trials in Jan 2012 in Houston. We might just see her at a fifth Olympic Games!