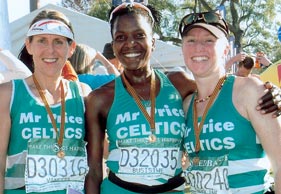 Watching Busisiwe Matiwane finishing amongst the top ten women most weekends in races in the Cape, you’d never guess that she is just as accomplished in another sport. In fact, she holds a black belt in karate. So don’t make any sudden movements! – BY SEAN FALCONER

When Busisiwe Matiwane took up karate in 1993, aged 18, her goal was to learn to defend herself, because it was not always safe for a young girl in Khayalitsha. “There was a lot of violence in the township and I had had some problems,” she explains, “But after I started my training and people heard about it, they never gave me any more problems.”

She joined a Goju-kai karate school because it was the closest to where she lived and she knew some of the people in the group. By 1999, she had attained her first kyu brown belt (ninth level, one below black belt), and also enjoyed success in karate tournaments, twice being selected for the Western Province team, and winning a silver medal at the 1997 provincial championships in the kumite (sparring) category.

From 1999 to 2003 work commitments in Fish Hoek saw karate take a back seat, but that changed in 2004 when she got a job in Claremont, much closer to her Phillipi home, and could once again attend training. However, a new sporting bug soon bit…

BORN TO RUN
“I returned to karate to do the grading for my black belt and started doing morning jogs to build my fitness. By the time I was prepping for my grading, I felt much more fit than in previous years.
I found that I was much more flexible and had a lot more endurance thanks to running, so I decided to concentrate on running,” says Busi.

It’s quite interesting to hear how Busi got into competitive running. “Even though I was strong
and fit, I wanted to lose 10kg. So one day I decided to pack my work clothes in a backpack and
run to work. I took money for a taxi just in case I got tired, but I did the full 18km. I got to work, took a shower and felt strong and active, and I was singing like anything. So the next day I ran
to work again.”

Seeing how well she was running, Busi’s employer suggested she join the nearby running club, Celtic Harriers. Busi was initially reluctant, thinking – like most beginners – that she would be left behind and come stone last, but she took the plunge and soon found that she was actually quite competitive. She also rather enjoyed the races. “In running you get a medal even if you are position 1 023, not like karate, so I knew I could get medals and collect them while also losing weight!”
Just six months after joining Celtics, Busi finished her first marathon in 4:30. She was then invited to join the Sports Science Institute’s Superstars Programme and train for the 2005 Two Oceans ultra. She finished in 5:50, but had found out just before the race that she was three months pregnant, so a lay-off from all sport followed. In 2006, after the birth of her daughter, Musa, she was back on the road again, going on to run the 2006 and 2007 Comrades Marathons, finishing both in 9:34.

NOT FORGOTTEN
Busi has become a regular top ten finisher in Cape races and has represented Western Province at the SA Marathon, Half Marathon, 10km and Cross-Country Champs. In 2006 she was awarded the prize for most improved female runner in the province, and in 2008 and 2009 she was the female cross-country runner of the year. So does that mean her karate days are over?

“Karate will always be part of my life, and I have several black belt kyus still to work through, but my focus now is on running. I do the karate when I need a break from running,” says Busi. “I think karate gives you discipline and you feel more confident
about yourself. That has helped me in my running as much as my running has helped
me in my karate.”

KARATE 101
Karate (literally ‘empty hand’) developed in Japan and was made world famous by the martial arts movies of the 60s and 70s. It is a striking art using mostly punching, kicking, knee and elbow strikes, and open-handed techniques such as knife-hands (the famous karate chop). Today karate is practiced for self-perfection, for self-defence and as a sport, with
23 million karate practitioners worldwide.