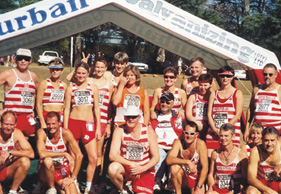 Have you ever wondered how the distinctive red and white stripes on the vests of members of Westville Athletic Club came about? Well, blame it on a bottle of ‘Lion Ale’ beer! While downing a bottle of Lion Ale, a group of ten enthusiastic runners made the suggestion that the red stripes on their new club vests be the same red as those on the Lion Ale label. Today, Westville Athletic Club in KwaZulu-Natal has grown into one of the most successful, respected and recognisable clubs in the country. – BY MICHELLE PIETERS

In the late 80s the following article on Westville Athletic Club appeared in the Daily News: “It is amazing how some clubs seem to find the time to compete successfully in the Polly Shorts league, put on excellent races, have full teams running cross-country, have successful time trials, yet also seem to find the time for extramural activities. Take Westville Athletic Club, who is leading the league, as an example. They have taken the time to create a club environment, which involves the entire family unit. They recently held an ‘Extravaganza’. The production involved rehearsals twice a week for a minimum of three hours and produced a slick, hilarious show that has seen Sun City clamouring for the cast to appear at the Super Bowl! The chairman and partner, resplendent in tutus, did a piece from Swan Lake.” The article ended with the statement: “This show underlines that Westville Athletic Club is certainly serving their members and the community of Westville proudly.”

Today, 36 years after the club was started in 1974, Westville Athletic Club is still serving its members with pride.

These young men formed a strong bond while running and by early 1974, decided to form their own club. Norman Hosken suggested that the new club adopt the same horizontal stripes – but in a different colour – as Celtic Harriers in Cape Town. They decided Westville would be a good place for a new club, as there were no running clubs between Durban and Pinetown. The newly-formed club stretched its running legs for the first time at the Savages Marathon in 1974. They made an impressive debut, walking off with both the individual and team honours!

THE CLUBHOUSE
Starting out, the members of the club were known to use garages, phones, letterboxes and even car boots as their clubhouse. It was a proud day in March 1985 when Westville Athletic Club moved into its own building. It needed a lot of work, and at that stage, both fundraising and member sponsorships were vital. Over the years many alterations were made to the clubhouse, and today Westville club members are proud of their 123 Maryvale Road address.

THE WESTVILLE BOYS
It is not often that an athletic club is started by mostly elite runners, and this club has more than a few achievements to boast of:
• Derek Preiss is one of the more well-known founding members. He was only 19 when he came sixth at the SA Marathon Champs. In 1974 he had a pre-race meal of chicken, milk tart, chocolate, fried eggs and toast before tackling the Comrades. He won the race in 6:02:49! Though he vowed to never run Comrades again, he was back the following year, claiming a second victory in a time of 5:53:50. On top of that,
he won the Two Oceans Marathons in the same years.
• Another consistent, top-class runner of this era, and founding member, was Dave Rogers. Dave has run more Comrades in Westville colours than any other member and completed the race in top positions from 1974 to 1994.
• Steve Atkins was another elite athlete best remembered for winning three gold Comrades medals.

WESTVILLE’S WONDER WOMEN
Westville women are strong contenders, not only at Comrades but also at various road races in KwaZulu-Natal. They won the team prizes in 32 races during 2008.

Today the Westville ladies still make their club proud and regularly win various team prizes.
• Gill Tregenna is a grandmaster with a green Comrades number. Today she still runs in the shorter distances and achieves a podium finish at nearly every race she runs. And if that is not enough, she also has South African colours for swimming.
• Sanet Beukes, who achieved gold at Comrades, is an honorary life member.
• Westville’s best performers in the Comrades Marathon were Sanet, Rentia Denissen (Poolman) and Liz Chelin. The veteran ladies have done the club proud by achieving the first place veteran’s team category at Comrades four years in a row.

SOCIAL FUNCTIONS
Westville Athletic Club is well known not only for social events, but for the innovative way in which these events are staged. Many functions such as karaoke evenings, a July Handicap Day, a barn dance, the Odd Ball Olympics and Interclub Soccer matches have been held.

These days, many social functions are held throughout the year, culminating in the year end function, a highlight on the club’s calendar. “We love our social evenings and go all out to put on the best event at our year end function,” says Michelle Wilmans, club secretary. Not much running gets done the next morning as most members choose to party the night away.

The club, with its more than 300 members, has a strong focus on Comrades. A carbo-loading evening is held a week before Comrades with a traditional Aches & Pain party after the big C. Prizes for the first man and woman home in the different age categories as well as the last person home and the oldest runner are handed out at this function.

TIME TRIALS
Time trials are an integral part of Westville Athletic Club. In earlier years free ice-cold beer was given out at the finish and on many evenings, more than 70 runners showed up for the time trials.

Numerous time trial leagues have been introduced over the years. The Westville men have won the Veterans and Seniors Inter Club titles on a few occasions. The Highway Ladies Time Trial League has been going for the last 15 years and Westville ladies have won it 12 times and drawn once.

Westville is known for its very tough time trial route that is run on Tuesdays at 17:45 from a track at the clubhouse. Up to 80 athletes gather at the weekly time trial. “Many are visitors as we welcome new faces,” says Michelle. The only time that time trials are cancelled is when a public holiday falls on a Tuesday.

WESTVILLE RACES
Westville has always had a good presence at most road races. The club was one of the first to erect a canvas shelter at a race. In September 1982 a beach umbrella in the famous red and white colours was erected and members could enjoy a beer after the race at a cost of 5c!

The club proudly presents its own race, the popular Illovo 15km Christmas Challenge. This event was started in 1986 when the club decided to shorten their annual December run from 21km to 15km. The fact that the club’s colours were red and white and that the festive season was around the corner, resulted in the birth of the Christmas Challenge.

Running clubs embraced this theme and many have used it for their own end of year celebrations. Today it is one of the most festive races on the calendar; many clubs run in buses and a trophy is awarded to the bus with the best spirit.

A well-known face at many road races is that of Alen Hattingh, who has been involved in running for over 30 years. An accident years ago left him paralysed, but you won’t find a more committed and passionate man than Alen, who is a well-loved race referee in KZN. He has served on the Westville Athletic Club’s committee for many years and has held the position of chairman, cross-country captain, road captain and so the list goes on.

CLUB RUNS
In the early days a highly-competitive spirit entrenched itself within the group of founding members. They trained to win! As the years went by a more social nature developed within the club with a strong focus on family involvement.

Currently, many groups meet at various venues around Westville. Some of these groups have been going for 20 years and include the A Team, the B Team, the Checkers Team and the Kloof Team.

Next time you are in Durban and feel like a good run and an even better social afterwards, join the bunch of runners at the Westville Athletic Club!