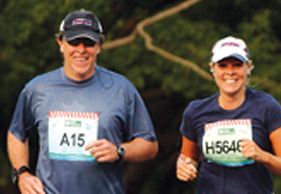 Between stressful jobs and trying to spend quality time with the family, exercise is often the first thing that falls to the bottom of our list. Modern Athlete speaks to various high-powered professionals to find out how they manage to fit sport into their hectic schedules. This month we chat to Professor Tim Noakes, Director of the Research Unit for Exercise Science and Sports Medicine (ESSM) at the University of Cape Town, Co-Founder and Executive Co-Director of the Sport Science Institute of South Africa, and author of the world-renowned Lore of Running. – BY SEAN FALCONER

How did you get involved in sports science?
Through running and my training in medicine in the early 1970s, I realised that medicine was more involved in disease than health promotion, and there was little interest in sports medicine. Thus, if you were an injured athlete, you were left to your own devices and medicine had very little interest in helping you. I was challenged to see whether I could change those attitudes.

Proudest moment in your career?
Being awarded the Order of Mapungubwe by the State President in 2008.

How long have you been running?
41 years. I started running to train for rowing in 1969, and then decided that I wanted to run the Comrades Marathon.

How many hours a week do you spend running?
I run two to three hours per week and usually walk for a further one to two hours on the weekends.

What is the biggest obstacle to your running?
With age it becomes increasingly difficult to run every day. Running every second day is preferable.

Has running influenced your career and work ethic?
I think running has actually defined my career. Finishing the Comrades Marathon at a pace that three years earlier I had been unable to sustain for two miles and sustaining that for 56 miles showed me that if you are prepared to work at something, you can achieve things that you never thought possible. I also learnt that the brain is clearly the crucial determinant in setting your achievements.

Tell us about your racing career.
I ran regular marathons and ultra-marathons up until 1990 and then decided to stop. During the last four years of my running career I had also done some triathlons and cycling races. In 2006 I ran the Chicago Marathon with my daughter.

Proudest moment in running?
Finishing 66th in the 1973 Comrades Marathon in 6:49.

Do you have running role models?
Dr George Sheehan, who wrote some of the best books on the psychology of running in the 1970s. He captured the running experience in a way that no one has been able to do since.

I could not go running without my…
Garmin Forerunner. At my age I want to ensure that I don’t increase my heart rate above certain limits.

What do you think about when you run?
I often plan a talk that I have in the next few days, because I can repeat the ideas and eventually get them into the right sequence.

What is the best advice you can give to fellow runners?
Don’t run too much when you are young; rather spread your running career out over your entire life. Also, don’t run too many ultra-marathons, and do triathlons and cycling events as well.

What would you say to someone who says they don’t have the time to start running?
Running is going to extend your life, so investing a small amount of time in running will give you more time to enjoy life.

What are your future running goals?
I plan to run the Two Oceans Half Marathon every year for as long as I can.

My greatest ambition is to…
Convert the scientific world to our idea that the brain regulates exercise performance.