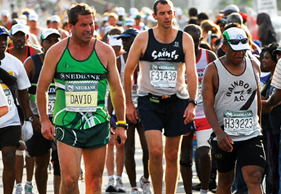 It is every runner’s nightmare: oversleeping on the morning of Comrades and not making it to the start line. For actor and TV personality, David Vlok, this nightmare was no different. Every year in the lead up to Comrades he would dream that he overslept or forgot to put his shoes and race number on. Luckily, for the past 19 years that he has tackled the long road between Pietermaritzburg and Durban, this has been nothing but an awful dream. Then came Comrades 2010, the day he was meant to run his 20th race and receive his coveted double green number. – BY MICHELLE PIETERS

It’s 4:45am in a room in the Elangeni Hotel located on Durban’s popular beachfront. A cell phone rings and he fumbles in the dark to answer. His girlfriend on the other side of the phone says, “Hey my love, how is the start?” A thousand things race through his mind; it can’t be Comrades day. Surely someone would have woken him. By now David is wide awake and he realises something is very wrong. When his girlfriend asks where he is, panic takes hold of him and he shouts, “I am still in Durban!” And so David Vlok’s worst nightmare became a reality.

REWIND
Let’s rewind a little. Two days before Comrades David and one of his best buddies, Bruce Fordyce, left with the rest of the Nedbank elite team. David’s girlfriend, Candice Cullinan, could not accompany him to Durban this year and David shared a room with Renier Grobler, part of Nedbank’s seconding team. David was excited. It was his 20th run and apart from a niggling foot injury that was resolved just before Comrades, he was on target for a Bill Rowan medal.

The evening before Comrades the boys from the Nedbank team had a couple of pints while watching the Super 14 Final. Around 10pm David called it a night. On the way to his room he reminded Renier to bring him a bigger running vest, as his vest was too small. Renier eventually made his way to the room, forgetting the vest and mentioning to David that they were still busy preparing nutrition and hydration for the athletes. David assumed Renier would bring the vest at a later time.

Why he did not set his alarm still puzzles David. “Each year I set my own alarm or I get a wake up call. This year for some reason I just assumed I would wake up as Renier got ready.” What David did not know was that Renier got so wrapped up in getting everything ready, that he did not sleep. Just before 3am he took a quick shower and left the room quietly to finalise the last details, forgetting David’s vest and assuming David had set an alarm or arranged for a wake up call.

Around 3am the Nedbank pro athletes left in two vehicles from their respective hotels. Bruce, who stayed at the Hilton, thought his buddy David was in the second bus. Only when they all arrived in Pietermaritzburg, did they realize that David was missing…

THE NIGHTMARE CONTINUES
The first thing David did after realising he had overslept was to phone hotel staff to find out if there were any Nedbank athletes downstairs. When the surprised receptionist answered that they had left, David shouted, “How can they leave me behind? And they left in my vehicle! On top of that they did not even bring me my bigger vest!”

He asked hotel staff to arrange transport for him to Pietermaritzburg. Survival mode kicked in. David tore his small vest trying to make it looser and hastily pinned his race numbers to it.

He ran downstairs, cell phone in one hand and energy gels in the other, only to find that there was nobody to take him to Pietermaritzburg. “You can’t do this to me!” David shouted. His eye fell on a haggard-looking taxi outside the hotel, with the driver fast asleep in his seat. “How much to Pietermaritzburg?” David shouted. “R800,” came the sleepy reply. “I don’t have cash on me. When you get back ask the hotel staff to pay,” David exclaimed.

COULD IT GET ANY WORSE?
Eventually they made their way onto the highway. David frantically phoned Renier and demanded to know why they had left him behind, soon learning it was all a misunderstanding. His watch told him it was 5:10am. David reassured himself that starting even ten minutes late would be okay.

About 40km from Durban the taxi came to a standstill. No petrol. Could it get any worse? David grabbed R50 from the driver’s moneybox and ran 1km to a nearby garage where he bought a can of petrol and ran back. It was 5:30am. He realised the cockerel has crowed in Durban, Chariots of Fire had been played and the gun had gone off.

He refused to give up! In Pietermaritzburg, the taxi battled to get to the start as most roads had been blocked off. It was 6am.  David caught sight of the Town Hall’s lights, jumped out of the taxi and started running. The start was about 3km away and he sprinted to get to it.

It was 6:15 as David ran towards the start! Amused spectators assumed he had forgotten something very important if he was running back to the start. Officials started rolling up the red electronic timing mat that registers all Comrades runners as starters. David hysterically shouted, “Stop! Stop! Put the electronic mat back so my start time can register!”

Officials refused as David tried to explain that it was his 20th run and he had gone through so much in the last 90 minutes just to get to the start. But officials informed him that he had been disqualified from Comrades 2010.

Just then a spectator took a photo of David. He realised the picture would later serve as a record that he had started the race. He ran right past officials who once again warned him that he was not allowed to run. “Are you going to chase me all the way to Durban?” David asked.

DAVID’S DETERMINATION
He ran slightly off the route as he was worried that officials ahead would pull him off the road. As he got back onto the main road, a police car pulled up next to him. “David, what are you doing?” the policeman asked. By now David was running at nearly full speed as he tried to catch the back markers, so that he would disappear into the crowd.

For the first time that day things started looking up. The policeman agreed to escort David on the route. Then two police cars and an ambulance joined the escort. Later that day, David told Bruce that for the first time in his life, he felt as if he was leading the race!

VISUALISE IT
Helpers and supporters at the water tables looked on in surprise as the police escort passed them with David in tow. Was there a second race they weren’t aware of?

The policeman told David that the backmarkers were about 8km ahead of him. At that stage, David was running sub 5min/km to try and catch them. At the top of Polly Shorts he saw the lights of the cars escorting the back markers. By then spectators and helpers had caught on to what was happening. Some began to cheer and others started running next to David. About 15km from the start, David eventually caught up to the last two runners of the nearly 16 000 person field.

HELP ME VLAM!
David reached Vlam Pieterse, well-known leader of the sub-12 hour bus. A surprised Vlam’s first words were, “What are you doing here?” He then reassured David that he would make it to Durban if he relaxed and sat in the bus for a while. However, David’s body was reacting to stress and starting too fast. He started cramping and throwing up and eventually lost the bus. Someone passed him a banana and he slowly started to feel better, and caught up to the bus once again. Every time David saw an official he cringed, worried that they would pull him off the road. After all, he had been disqualified and was technically not allowed to run.

Around the 60km mark David made a pit stop, but got too close to a thorny bush, which tore his number. Could anything else go wrong? He struggled to get his number back on. Eventually back on the road he picked up the pace, fighting his way to Durban, worrying the whole time about what would happen when he reached the finish line.

THE FINAL COUNTDOWN
The last 10km David ran at 5min/km passing many runners, some probably wondering whether he had cheated. How could someone in this group run at a sub 5min/km pace after 70km on the road?

David entered the stadium a worried and emotional man. By now many spectators, officials and Dave Dixon, the president of the Comrades Marathon Association knew what had happened. The crowd was cheering and the announcer mentioned his name and the fact that it was his 20th run.

David crossed the finish line in 11:13 and ran straight to Dave and other officials. After explaining his situation, Dave assured him that he would be registered as an official Comrades finisher and that he was allowed to collect his medal and coveted double green number.

Bruce presented David with his double green number. He burst out laughing and his first words were, “Show me what a Vic Clapham medal looks like.”

THE NIGHTMARE ENDS
“That evening everything was surreal, as if it did not happen to me. Only the next morning I started laughing. Today I ask myself, ‘Why did I not just get back into bed once I realised I had overslept? Why when there was no hotel transport did I get into a taxi? And why when I was disqualified did I keep on running? Why did I not just give up and why did I put myself through all the torture to get to the finish line? But I know it is in my nature to never give up no matter what. And I suppose that is what Comrades is about; its what makes this race so special.”

READY, STEADY, GO
Next year David will be back. And he will set an alarm. “I will always run. I love my beer too much to stop training. If I do stop, I will put on weight and look like Bruce did two years ago, a little vetkoek,” chuckles David, co-owner of Ogilvy’s, a pub and restaurant in Midrand.