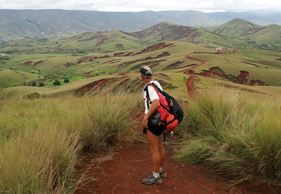 At the end of March a haggard-looking David Grier arrived back in Cape Town after a harrowing solo run through Madagascar. Having lost 20 kilograms, survived tropical storms, more than 100 dangerous river crossings, swamps, bilharzia and leeches, and having come close to dying four times, he had quite a story to tell. – BY SEAN FALCONER

Having paddled his sea kayak 500km from Mozambique to Madagascar, and then run 2 100km of the 2 700km from the southern point to the northern point of the island, David Grier was lying under a bush, trying to stay cool in the jungle humidity as he fought a fever that left him too weak to move. He had contracted bilharzia halfway through the run from the stagnant water he had run and swum through, had lost about 15kg in body weight, and had blood in his urine.

“I sent an SMS to Professor Wayne Derman back home to discuss the symptoms, and he replied,
‘I don’t think you’re going to make it; we need to extract you.’ It was one of the most gut-wrenching moments in my life. I don’t know if I was close to dying, but I do know that you get to that stage when you sit down and feel it would be so much better to just close your eyes and rest. My body was totally useless, but my mind took over and pulled me out of that deep hole. I had to pick myself up and push on, because I knew that every day I spent in that jungle meant more chance of getting sicker.”

DEATH-DEFYING
That was only one of David’s close shaves with death during the challenge. While paddling to the island, the 50-year-old father of four and celebrity chef from Cape Town says a tropical storm suddenly appeared from nowhere. “It was coming right for me, so I turned to look for my support boat, but it was just a tiny speck in the distance. Luckily they picked me up just in time. The yachting fraternity did tell me I was mad to go across in monsoon season!”

The torrential monsoon rains nearly claimed his life twice on the island. “One night in the jungle it was freezing and I was getting hypothermia. I knew I had to keep moving to keep warm, but it was dark and I couldn’t go anywhere. I put on all the clothes I had in my rucksack, then stood against a tree so most of the water would run off me. Next I did pull-ups on a branch to generate heat, but when that got too much, I just immersed myself in the swamp water – because it was a lukewarm 28 degrees!”

Then, less than two days from finishing, he was crossing a flooded river near a waterfall at night when the current took him. “My rucksack was filling with water, and I knew that the waterfall would mean the end of me. I told myself not to panic, relaxed my body, and suddenly I felt branches scratching my face, so I reached up and pulled myself out of the river, bit by bit. I lay on that riverbank until the sun came up, knowing that those few seconds of rational thought saved me, because panicking exhausts you and prevents you from fighting back.”

GOING SOLO
David is no stranger to long runs. In 2006, he and Braam Malherbe became the first people to run the full length of the Great Wall of China, covering 4 200km in 98 days. Then in 2008 the duo completed the South African Coastline Challenge, running 3 500km in 80 days from the Namibian to the Mozambican border. Both runs were to raise money for the Miles for Smiles Foundation, which funds operations to fix the facial deformities of children with cleft palettes and lips, and give them better quality of life. “I know how much these kids suffer, so when I see the before and after pics, I know why I put myself through this,” says David.

With Braam pursuing other interests, David decided to undertake his first solo challenge, and chose Madagascar because of its mystique and beauty. “The forested areas are like a dream world, but the island is going through a bad stage of collapsing infrastructure, deforestation and erosion. As a result there isn’t much birdlife left, and only pockets of lemurs, but it’s a great place if you love snakes – I saw about eight a day. And the chameleons were absolute monsters!”

“What stood out for me was the weather and conditions, which made this mentally and physically the most difficult thing I’ve ever done. In the south it was so hot I couldn’t run after 10am and had to start at 3am. But the biggest downfalls were the monsoon rains, stagnant water and disease. “I chose to run in the monsoon season because there are no shops to buy water. The rainwater sits in little hollows and I had to sift the mud out through a t-shirt. It’s the only water to drink – and it nails you from both ends!”

A WORLD APART
David had a support crew made up of fellow South African, Nick Heygate, and two Malagasy locals following him in a 4×4 vehicle, but only saw them for about half of the time. Many roads and bridges were washed away and his crew had to take long detours, which meant he sometimes went up to 14 days without seeing them. The plan was to first run up the centre of the island to the capital Antananarivo, then veer east to run in the lee of the mountains for more protection from the rain, but David says this was where the warm and cold air met and it actually rained even more!

“I was wet for days on end, and the gravel and mud in my shoes shredded my socks, so I had to be so careful to avoid my blisters getting infected. Then the roads just ended and the crew had to drive 500km back to the capital, cross to the west coast and drive another 700km to meet me while I trekked 250km through swamps and jungle to get to the other side of the island.”

The stagnant rainwater brought another problem. “The leeches were disgusting. Nick and I pulled more than 150 off ourselves each day. And if you scratch it off incorrectly it regurgitates, which infects the bite, then flies lay eggs in the wound and next thing you know you have maggots in the wound and your muscle tissue starts rotting. It happened to Nick and he had to be extracted, but he recovered and then continued the journey with me. He’s one tough guy!”

David visited villages whenever possible to find food, water and shelter as well as to ask for directions. “If I’d just followed GPS co-ordinates, I’d probably still be stumbling around the swamps and jungles. The villagers knew the best routes, especially the driest options when it rained.” But first he had to convince them not to be scared of him. “I would arrive in some towns and the villagers would run away, because they’d never seen a white man before. Then I scared them all over again with my talking phone.”

The local cuisine also posed a few challenges. “Their basic food is rice eaten with whatever protein they can find, but it’s very limited. The worst was one horrific meal of zibu hoof soup, with rotten gel oozing out of the cow hooves. I simply couldn’t eat it!”

WHERE TO NOW?
So is there another challenge in the pipeline for David? Not yet, he says. “I’ve taken a mental and physical hammering from the last five years. So much has happened to me, and it’s difficult to adapt to normal life. One day I was fighting for my life in a cyclone in a jungle; two days later I was in a mall back home. Now I know what a caged animal feels like!”

“Also, I realised on this journey what I have put my wife and family through. You sometimes think it’s only you out there,
but this time I thought to myself, ‘You’re being really selfish!’ So I spoke to my wife, Lizelle, but she said what we are achieving makes it worth it. The fundamental reason for the runs was to make a difference and inspire people to also go out and make a difference. I think I have achieved that.”

FOR THE CHILDREN
Through their first two runs, David and Braam
raised just on R3 million for the Miles for Smiles Foundation, which has funded more than 1 000 operations in South Africa, Rwanda, Swaziland and the Congo. David will be heading back to the island in September when 180 operations will be done there. To date, David has raised over R500 000 through his Madagascar run, and will continue with this effort for the rest of 2010. To contribute to David’s Madagascar Run fundraising campaign, go to www.milesforsmiles.co.za.

READ ALL ABOUT IT
David has written books about his first two runs, filled with stunning photographs he took along the way, and will be writing about his Madagascan run in the near future. His books on the Great Wall run (Courage and Rice, R300) and Coastline Challenge (Hope in Thyme, R250) are available at www.davidgrier.co.za.

Four lucky readers could each win a signed copy of Hope in Thyme. Simply log on to www.modernathlete.co.za and click on the competition link on the homepage. Competition closes 26 July.