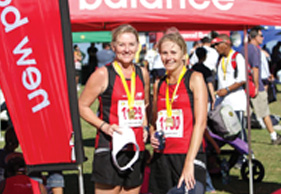 A record field of over 11 000 runners and walkers, including Safari novices Kathy Manson and Bev du Rant of the New Balance Multisport Club, enjoyed ideal running conditions and a great atmosphere at the 23rd running of the Safari Half Marathon and its shorter events on Worker’s Day.

It’s 6pm on a Friday evening and two over-40 ladies with 14 months of running experience and a few half marathons under their belts were on their way to their first Safari Half Marathon. We had booked into a guesthouse for the evening – in order to sleep later on race morning – and headed to Paarl for pre-race pasta carbo-loading. Well, the pasta soon turned into rugby (the Stormers thumped the Crusaders!), pepper burgers for two… and some wine.

Back at the guesthouse two glasses of sherry awaited us. Despite having a mosquito keep us awake until about 4:30, we left at 6:30 for the school grounds. At 7:15 we were on the run, but after planning to run together, we lost one another in the crowd. One of us was feeling strong and running well, but for the other, the legs were not all that strong, thanks no doubt to the night before, but walk/running did the trick. So, the focus became trying to keep up with the sub-2:00 flag, then the sub-2:30 flag, and eventually to just finish the race. One of us did our best time and the other her worst, though we’ll never name the names…

It was a beautiful day and the surroundings were breathtaking. The route was easy up and down, with regular water points. All in all, a great vibe and one of the more pleasant 21.1km runs.