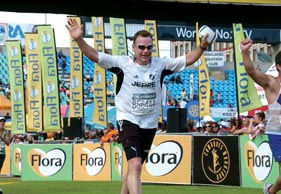 When balancing stressful jobs and trying to spend quality time with the family, exercise is often the first thing that falls to the bottom of our list. Modern Athlete speaks to various high-powered professionals to find out how they manage to fit sport into their hectic schedules. This month we chat to our very own Mike Bray. He is the publisher of Modern Athlete, MD of Elixir Concepts and was, until recently, CEO of the PenQuin International Group.

How did you get involved in your industry?
I have been in some form of sales since my first job in 1991, which lasted two years. Since 1993 I dropped the idea of working for a boss and started several of my own ventures. I was offered an opportunity to get into media and marketing in 2000 when I was approached to pitch on the exclusive sales rights for Playtime Media. My good friend, Grant Leishman (who was in London at the time) and I, pitched and were surprised as anybody when we won the account. We quickly formed a business called PenQuin.

What is the most exciting thing about your job?
My portfolio is so diverse, so every day is different and presents a whole new set of challenges. I am one of those people who get bored quickly so I am always looking at new ventures and challenges. My entrepreneurial nature causes my partners some stressful moments because they never know what the next adventure will bring. Modern Athlete is the latest and most exciting venture I started. We have such a great team and within a year, have created a magazine that belongs to the South African runners. Producing it each month is as exciting as it gets…

Who are the most interesting people you have met?
I am not a big name dropper socialite and always get on with people from all sides of the fence. So I find most normal people interesting in some way and most successful people normal once you get to know them. There are way too many interesting runners who
I have met who define themselves and this alone makes them
most interesting!

Proudest moment in your career?
Still experiencing it. I co-founded and built a group of businesses from the start up with R200k capital. They now have a budget of R200 million and over 130 employees. I am really proud of what Modern Athlete has achieved in only 12 months. We are already one of the top five sports magazines in the country (according to ABC distribution figures) and have become a firm favourite with readers.

How long have you been running?
I used to run track reasonably competitively at school. I took a ten year break and then ran for a few months in 1995 before taking another ten years off. I started again in 2005, so you could say it’s been about six years.

What motivated you to start running?
I was one of those kids who always watched Comrades and said, “One day…” Well by 2005 I had gotten to 130kg and was in my
mid-30s, so I thought, one day better be now before I can’t run.
I decided if I was going to be that stupid it had better be a special occasion, so I entered the 2005 London Marathon and paid up front so that the commitment was just too big to push out. I ran 4:02 in my first marathon and lost my first big toenail!

How many hours a week do you spend running?
Normally an hour a day from Tuesday to Friday with slightly longer runs on a Saturday and Sunday, depending on what distance event I am training for.

How do you fit running into your busy life?
I get up at 4:25am (yes, that
is just before the birds, and before the cock has even thought to crow!) Our club runs from 5am. I find it a great way to start the day and it also gets training out of the way. You can get in a good run, have a shower and be in the office by 7am.

Who do you train with?
My school at Jeppe; we are
a bunch of testosterone-driven males who, even though we know better, often race each other home. My mate Chad
just can’t resist, but then again he is a Leb!

What is the biggest obstacle to your running?
Probably my weight and the fact that I am fairly ‘niggle-prone’ in my legs. If I go too hard too soon, I break down. I guess this combined with the fact that I have a day job so I can’t focus only on my running!

Has running influenced your career and work ethic?
Yes, extremely positively. To run and achieve your goals you need to be three things: focused, determined and committed. You don’t need to be the most talented person on the road. Running forces those three qualities on you. Take the same qualities into the work environment and you will be successful. It is amazing how many people with successful careers I know who run. It is more than just a coincidence.

Proudest moment in running?
On the road, smashing the nine hour mark to get that elusive Bill Rowan after years of trying.

Most embarrassing moment in running?
Those toilet stops that sneak up on you and you can do nothing but go into the bush on the side of the road and hope like hell nobody recognises your rear end. It also leaves you red-faced if you catch
a cat’s eye with 3km to go at Comrades. I mean I managed to avoid them for 86km, then decide it’s time to eat some tar!

And in business?
In the 1990s, having my biggest client liquidate on me and open their doors the next day, trading on the same premises under
a different name, whilst I couldn’t pay my suppliers and had to explain why and negotiate terms.

The thing I love most about running is…
The fact that you get to define yourself. The freedom and sense of personal achievement when you reach your goal after working so hard. That small moment of joy as you know you made it.

Who are your running role models?
I used to run track, so Michael Johnson, Seb Coe and Johan Fourie inspired me. Bruce Fordyce was a Comrades hero on TV and the reason I decided to run it. And getting to train with Barry Holland.
I mean come on. The man has run 38 Comrades in a row…

What do you think about when you run?
I am always thinking about articles for the next issue of Modern Athlete, what is happening at work, how lucky I am to have such
a wonderful wife who understands why I run, and how cute my kids have been the previous day. I often run for them, especially when
I am taking strain and considering just giving up on chasing a goal.

What is the best advice you have been given with regards to running?
Introduce speed work into your weekly training; it will improve
your times.

And the worst advice?
The Winelands Marathon in the Cape is a flat route.

What is your favourite meal after a big race?
Big hamburger, well done fries and a huge double thick milkshake!

What would you say to someone who says they don’t have the time to start running?
It means you don’t want to make time. Running will give you
so much more energy to do other things in the day. You can sleep when you’re dead, so don’t miss out on one of life’s greatest gifts!

What are your future running goals?
Sub-three hour marathon.

Favourite quote?
“There is no such word as can’t.” – My late father, Kip Bray.

Life motto?
Define yourself! Because only you can…