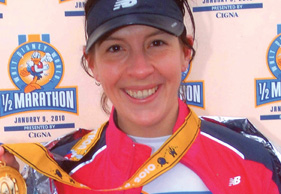 The Walt Disney World Half Marathon offers runners the chance to run on a truly magical course through Disney’s Magic Kingdom, Epcot Center, MGM Studios and much more. The half marathon follows an out and back course through the park that starts and finishes at Epcot. The next day, half marathon participants are invited to join the full marathon participants for the awards ceremony at the park’s Downtown Disney Pleasure Island. Karien van der Merwe, a runner from Kimberley Pirates, shares her experience.

The Walt Disney Half was a dream-come-true for me. I’ve been dreaming and drooling about running races overseas for as long as I can remember! In late 2009 I decided I was tired of only dreaming and wishing. Each one of us has only one life and it must be lived!

I closed my eyes, withdrew some hard-earned savings and took the plunge! Since my lightbulb moment didn’t coincide with similar revelations amongst any of my running friends, I started researching races and locations safe enough for a woman to tackle alone. Disney was perfect – a safe family environment, efficient (and free!) Disney transport, and a speaker series to die for: Bart Yasso, John Bingam, Hal Higdon, Jenny Hadfield, Jeff Galloway…

The trip (my first overseas trip) was fantastic. The expo was a runner’s paradise. And so cheap! The speaker series was a definite highlight and the goody bag couldn’t be better. Absolutely everything was characterised by pure American over-the-top-ness!

The race itself was freezing – while we stood in the starting pens it actually started to snow! The route went through two of Disney’s theme parks: the Magic Kingdom (including Cinderella’s Castle) and Epcot. And all along the route were cold, but extremely enthusiastic Mickey Mouses, Cinderellas, Donald Ducks and masses of families and friends. I finished, frozen, but beaming, in 2:03:11. Along with 17 500 fellow runners, I was treated to a formidable post-race spread and of course, a medal as big as a gong!

Definitely an adventure I would recommend to every fellow runner!