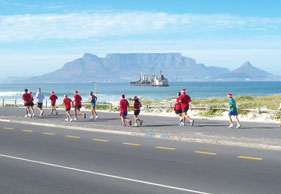 They like to think they’re the most sociable running club in the country with the best clubhouse as well, and you’ll see why if you pay a visit to West Coast AC in Blouberg, Cape Town, on a Tuesday evening. – BY SEAN FALCONER

Read through West Coast AC’s welcome letter for new members and you’ll come across a paragraph marked in bold red letters: “Seeing that we have the reputation of being a drinking club with a running problem, we encourage you to uphold this reputation fiercely at every opportunity, locally and internationally!” And that’s exactly what the West Coasters do. The clubhouse bar often stays open till the early hours, and the club tent is a fixture at races. “We have a great rivalry with Fish Hoek to see who has the last tent standing,” says club chairman Terry Ireland, “and I’m proud to say we usually win.”

But don’t let this fool you into thinking that the West Coasters don’t take their running just as seriously. “Yes, we are a club that likes to socialise, but even when the guys have a late night in the bar, they’re still
out running the next day,” says club captain Brett King. “Each year we have a number of athletes earning provincial colours, and there’s a healthy rivalry between the seniors and the masters too.”

One of the club’s top performers is Tilda Krugmann, who earned national colours in 2001 when she was selected for the World 100km Champs after a great Comrades, in which she finished 15th in the women’s race. West Coast also has ten runners who have done 20 Two Oceans ultras, with Nick Miles and Sheila Colbeth the latest to join the double laurel club this year. But spare a thought for Craig Hartmann, says Brett. “He’s been stuck on 19 Comrades since 2006, trying to do his 20th, but always gets injured just before the race.”

DOWN BY THE BEACH
Based in Big Bay, Blouberg, as you drive north out of Cape Town, much of the West Coasters’ socialising is done at the clubhouse they share with the Big Bay Surf Lifesaving Club. The club was originally based at Theo Marais Park, where they shared facilities with the Milnerton rugby and hockey clubs, but in 1994 they moved a few kays up the road to their current beachfront position. “We reckon we’ve got the best clubhouse in the country. Okay, maybe somebody in Durban has a similar set-up, but we still think ours is best,” says Terry.

The club actually started as a satellite branch of Spartan Harriers in 1984. One of the founding members, Philip Marais, explains, “We were mostly ex-rugby and soccer players who wanted to keep fit. We wanted to start a running club, but not knowing where to go from there, we decided to affiliate to an existing club. The nearest available one was Spartans, because their club secretary was based in Maitland, so we became the ‘Table View Chapter’ of Spartans.”

Two years later they were ready for independence and the Milnerton West Coast Athletic Club was born, with the new red, blue and white club colours unveiled in October 1986 when Gary Thomson ran the Voet of Africa Marathon. The club steadily grew in size and today has about 300 members, but has dropped Milnerton from its name – the records don’t say why, but it was probably just to shorten a somewhat long-winded name, says Terry.

FIRST WE RUN…
While the club is known for its sociable bar, the members make a point of ‘earning’ their drinks. Official weekly club runs start from the clubhouse every Tuesday evening (6pm in summer, 5:30pm in winter), with marked 5km, 8km and 10km routes on offer. Showers are available at the clubhouse, with plenty of hot water, and then the bar is opened.

The club holds its monthly 5km time trial on the first Tuesday of each month. It starts in front of Doodles Restaurant in Beach Road and runs 2.5km along the beachfront to the Dolphin Beach Hotel and back. “It’s a nice flat course, with each kay marked, but it’s hell when the south-easter blows. Then you struggle all the way out and fly back!” says Brett.

West Coast currently presents two races, although one is only officially in an assisting capacity, at the Century City 10km and 2.5km in March. “We were asked to be involved because the presenting club, Century City, is very small and needed help. It started as an 8km fun run last year, but it was very successful, and had crazy prize money and loads of lucky draws,” says Terry. “This year it became an official 10km and now it’s part of a big sport festival at Century City.”

The club’s own race is the Realtors International West Coast Half Marathon in November, which has been on the calendar for many years and offers a fast and flat route. One section runs through the scenic Atlantic Beach Golf Estate and most of the route offers terrific views of the ocean.

…THEN WE PARTY!
True to the club’s reputation, West Coast has a full social calendar. The pub is open after every Tuesday run, but the first Tuesday of the month is official Club Night, which starts with the time trial, follow by the handing out of the monthly awards. There is also a lucky draw for a Sportsmans Warehouse voucher. Some Tuesday runs and socials are extra special: the nearest Tuesday to 17 March is the St Patrick’s Day Run, where everybody wears green and drinks Guinness, and there is a Midmas Run (Christmas in July) where everybody wears Christmas clothing or decorations.

The club’s annual dinner dance awards evening is held in April, while the Sunday after Two Oceans is reserved for the Aches and Pains Braai at the club, followed by the Two Oceans Club Night. The club is open all day for the Comrades, and then comes the big Comrades Club Night party. The AGM is held in August, followed by the Hat Party in November, the Charity Pub Run in the first week of December, the Family Day end-of-year braai, and the Christmas Day Run.

The West Coasters love welcoming visitors to their club, which is why three-time Comrades winner Vladimir Kotov is now considered an honorary member. “We have a great relationship with Vlad, because he upholds our drinking ethos with gusto!” says Terry. “For example, at the Aches and Pains Braai
he pitches up with a bottle of vodka and pours it down
everybody’s throats.”

Another highlight is the club’s water table at the Puffer 80km trail race from Cape Point to the V&A Waterfront. West Coast mans the last water table, on Signal Hill, and usually wins the Most Festive Water Table Award. “We have a red carpet and cheerleaders to welcome the runners, and running escorts to shout out orders so snacks are ready by the time they reach us. They love it,” says Terry. “It’s crazy to see how many West  Coasters come out for this. One year we went back up the hill at 22:30pm to make sure everything was cleared up, and the guys were still partying! You really couldn’t wish to belong to a better club.”

THE CHARITY PUB RUN
The highlight of the West Coast calendar is the annual Charity Pub Run in the first week of December.
A horde of runners in brightly coloured Pub Run T-shirts runs/walks a few kays up the road for a drink at five local pubs, then it’s back to the clubhouse for a huge party. And it’s all for a great cause, says Terry.
“It started as an informal pub run with about 15 of us. I decided to print t-shirts for the next one and suddenly 72 people signed up in advance. We ended up with over 100 people participating in that second one, and that made me think that it’s too big a vehicle to waste, so we should give it a charity angle.”

Brett adds, “We feel it is important to contribute to the community, and what we do that night brings in more money than most golf days. Last year we had 465 runners, the biggest field yet, and raised R35 000, which we gave to the Emmanuel Day Care Centre.”

Terry explains that part of the entry fee pays for the drinks and the t-shirts, while the rest goes to the designated charity. Runners can also carry shaking tins for donations from passersby, motorists or
other patrons of the bars. Each participating pub also contributes money to the fundraising drive.
“We choose five pubs who will donate the most to us and in return, we bring them 450 clients.
They probably won’t sell that much beer the whole night, so they’re happy to support us.”

The Famous Bum Run Photo
Pride of place in the West Coast clubhouse – sometimes – belongs to a framed photograph of
nine men running starkers down the Blouberg Beach. All they’re wearing are caps and running shoes,
and somebody wrote the name of the club on their backs, one letter per runner, with a marker pen.
Terry says they usually hang the photo in the bar, but it rarely stays there for long. “We leave it up until the lifesavers object, and then it gets moved into our trophy cabinet, but sooner or later it’s back in the
bar again!”