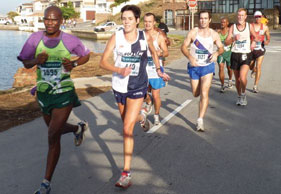 Wearing a red ribbon in her hair, a slender Benoni school teacher astounded the running world when she broke the tape at the 1989 Comrades Marathon in a phenomenal time of 5:54. She not only won the women’s race, she finished 15th overall. On that historic day Frith Van der Merwe set a record for the down run which today, 21 years later, still stands. Even more remarkable is that this was achieved only a couple of weeks after she set another course record that is also still standing at the Two Oceans Ultra. Frith is the queen of Comrades and undoubtedly, the best female ultra athlete South Africa has ever produced. – BY MICHELLE PIETERS

A few weeks before the 1989 Comrades Marathon, club members at Benoni Northerns Athletic Club (BNAC) were given the task of predicting their Comrades finishing times. A fragile looking history teacher named Frith van der Merwe bravely predicted her time as 6:14. She had already won Comrades the previous year (1988), finishing in a time of 6:32 and had finished sixth the year before in a time of 7:22.

She was running well but no one expected Frith, or any other female, to break the magical six-hour barrier. “Three weeks before, I set an African record of 1:54 in a 32km race in Boksburg. Everyone said I was racing too much and that I ruined my Comrades.” So when Frith predicted an improvement of nearly 20 minutes, by most people’s standards, it was a nearly impossible task. How wrong they were…

A MAGICAL DAY
“The night before Comrades 1989 I did everything nutritionists will tell you not to do! I had four glasses of wine and two toasted cheese and tomato sandwiches. I slept like a log!” The next morning Frith grabbed three chocolate bars and chugged down a cup of coffee before making her way to the start. She knew
she had a good chance of winning, but little did she know that she would be making history.

She remembers the race in great detail. “I went through Hillcrest feeling great. Just after halfway I realised I was going to break the record. I was on a high.” She passed legendary athletes such as Johnny Halberstadt and Alan Robb.

Most of them encouraged Frith but there were a few bruised egos. “There was a certain male athlete who earlier commented that a woman would never beat him. The bunch of journalists on the press truck warned the guys that I was approaching. When he heard it, he turned around and ran back to his home in Hillcrest,” chuckles Frith (45).

Finishing the race felt like a dream. “As I finished they played Chariots of Fire. I felt tearful, ecstatic and emotional. My mom was waiting at the finish line. It was for sure the best moment of my life – a day that I will never ever forget. Something like that happens only once in a lifetime. On that day I knew I had done something special and that I was going to be more than just a school teacher from Benoni.”

STARTING OUT
As a young girl Frith played tennis and netball, and never really gave running much thought. Everyone in the school had to run a cross-country race. “I tried to get out of it. I saw myself as a tennis player and I tried to persuade the head master that the tennis team needed more practise. I was so convinced that I would get my way that I dressed in my tennis clothes. I was the only runner in a tennis skirt! I was so frustrated that
I ended up winning the race.”

In 1982 she started her studies at Wits and joined their running team. “I saw myself as a social runner and enjoyed the parties afterwards more than the running.”

After varsity Frith joined BNAC. “I always watched Comrades on TV and made it my aim to run in 1987. I was 23 years old. Compared to today’s standards it’s young, but that’s what we did in those days. I didn’t take it too seriously and at the start I lined up at the group that indicated an eight hour finish. To my surprise I finished sixth lady in a time of 7:22. Bruce Fordyce said I had the right build and mind to become a good runner. I decided to start training properly.”

Just before the 1989 Comrades Frith tackled the Two Oceans Ultra, breaking Monica Drogemoller’s course record of 3:44:29. “There was a car up for grabs for breaking the record and I desperately wanted to win it.”

Frith’s winning time of 3:30:36 came on a day when more than 2 000 runners failed to complete the race because of extreme heat. “I ran up Constantia feeling great. I got to the 50km mark in world record time!”

After winning the 1989 Comrades Frith was determined to prove that she could also excel over the shorter distances. She beat legend Elana Meyer in a 15km race in Belville, finishing in 49:54. “I felt almost as proud as I felt about my Comrades win.”

DISAPPOINTMENTS
Shortly afterwards, she started battling with injuries. “My downfall was my competitive streak. At the Bergville Ultra in 1990 I was suppose to jog slowly with Bruce Fordyce, but when the gun went I ran hard.” Frith won the race, but picked up a stress fracture. “That taught me a lesson that one should not be arrogant in running.” In 1991 Frith returned to Comrades, winning it for a third time (6:08). The following year was once again filled with more injuries that prevented her from competing in most races.

In 1993 Frith won the Tiberius Marathon in Israel (2:38) and finished third at the Paris Marathon (2:32) in April 1993. At the World Marathon Champs in Stuttgart, Germany, later that year she finished fifth in a time of 2:32. The year ended sadly for Frith when her father, Daniel, passed away. Frith withdrew from the Tokyo Marathon. “I ran to help me get over his death. Then I picked up a hamstring injury which put me out of running for a very long time.”

A NEW START
Over this period Frith met her late husband, Mike Agliotti, while training in the gym. The couple got married in April 1995 and in December they moved to Port Shepstone. Sadly Mike was diagnosed with cancer. “A day before my birthday in May 1997, he died in my arms.”

Frith once again turned to running to help her through this emotional time. In 1999 she returned to Gauteng and joined Boksburg Athletic Club. She won Om die Dam (50km) in a record time of 3:21 and Loskop in 3:24. In 2000 she was hoping to make a comeback at Comrades. “I had a terrible run. I started too fast and finished in 7:07.“

Frith took up a teaching post at Jeppe Girls’ High but when one of her friends was raped in 2005 while out running, she decided to move to Port Elizabeth, and shortly afterwards to Grahamstown, where she currently teaches at St. Andrew’s College. “I am so happy. I am the house mistress and look after 76 teenage girls! I am also the athletics teacher in charge of cross-country.”

TRAINING
At the peak of her career, Frith ran from 150-170km a week. She always included an 8km time trial and a track session consisting of 1000m (six repeats) or 800m (eight repeats). Wednesdays were reserved for runs of about 25km and weekends for runs of 30-50km.

Frith, who has won 53 marathons in her career, trained mostly with a bunch of guys from BNAC. “We called ourselves ‘The A Team’. I did not need a coach. I knew my body and what session was right for me. I had a lot of friends like Bruce Fordyce whose brain I picked.”

In the earlier years Helen Lucre was one of Frith’s greatest competitors, while the evergreen Sonja Laxton was her greatest competitor in later years. “I always thought this woman was so damn good and consistent! She was like a flea; I could never get rid of her.”

Her trademark was a red ribbon she tied in her ponytail. “One day I had a brilliant run while wearing a red ribbon. Since then I believed I had to wear the ribbon to run well. I always wore exactly the same one though so many people gave me new ribbons. Eventually I auctioned my ribbon.”

LIFE TODAY
Frith still runs a couple of races these days and tries to do well in her age group. “Now and again I win, but winning isn’t everything anymore.” She is a member of Run/Walk for Life and still manages a time of 16:30 at the weekly 4km time trial. These days she runs between 80km and 90km a week. “One of the nicest things is the breakfasts at Wimpy after the runs!”

She still watches Comrades and Two Oceans on TV and every year, she hopes her records are safe. “Nothing lasts forever and eventually it will be broken. My hope is that a South African breaks it.” She has seven Comrades medals in the bag. “I don’t think I will run Comrades again. The last time I did, I forgot how far it is and how many hills there were!”

The only regret she has is that politics kept her from competing more internationally. She is happy that races nowadays offer equal prize money for men and women. “In my time it was not always the case and I sometimes refused to run races where the prize money was not equal.”

Her advice to novice runners is to enjoy the sport and to be patient in the path to improvement. “Running teaches you to be humble. Don’t just find the first coach you can. There are a lot of good running books. Speak to experienced runners and try to find what is best for you. Every runner is unique.”