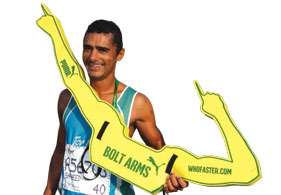 The Two Oceans has grown into one of South Africa’s biggest annual running events, with a 56km ultra-marathon, half marathon, two new trail runs, a host of fun runs and a great expo all taking place over Easter Weekend. Here are just some of the great stories from our readers coming out of this year’s races. – COMPILED BY SEAN FALCONER

He finished the race wearing strap-on foamalite Bolt Arms and looking strong, but it had looked unlikely that he would even be able to start the race.

The fans were handing out the Bolt Arms at the one kay to go mark, and I was given a pair because they said I was running like Usain Bolt, so I tried to look the part for the last kilometre… but I wasn’t actually supposed to run this race, because I had had two major mishaps that week. I wrote off my car on the Wednesday, then had a bicycle accident on the Thursday, and I had a dislocated finger and a bruised chest, but eventually I just told myself it wasn’t going to get me down. I had a couple of mates phone me to wake me up on race day, just in case, but it all went fine.

This was actually just a training run, because I had another priority on the 25th of April – the Ironman Triathlon. I started doing the Oceans half instead of the ultra because I needed to give my body a rest – which is also why I started with triathlons. I also knew there wouldn’t be enough time to recover from the ultra to do the Ironman three weeks later. Not that I would be able to rest after Oceans, anyway…
I needed to go get a new bicycle and a new car!

The South African women’s 100-mile record-holder continued her comeback after several years off the road, but admits she was perhaps
a bit undertrained for this run.

I’m trying to make a comeback to running because I’m doing a Kilimanjaro climb in August. We’re a group of ten girls hoping to summit at full moon on the 24th of August, so we’re all starting to train now – some girls on bikes, some girls on the road, some walking really hard in the mountains. What I know is running, so this is what I’m using get fit. Hopefully
I’ll get back into it again, because this is what I love doing. Southern Cross Drive is my hill training for Kilimanjaro – but hopefully Kilimanjaro is not as hard!

I must admit I only decided to do this race quite close to race day, so it was a
very quick increase of mileage and I probably deserved to be tired at the end.
Still the race wasn’t actually as bad as I thought it would be. Obviously my legs are getting stronger from the walking. But the mind is a funny thing in running… Even though I enjoyed my run, it brought back those really tough memories of when you reach 140km of 160km, or when you get to 37km of a 42km. I felt like that the whole way!

After finishing his 31st Two Oceans ultra, he shared a few thoughts about what brings him back for more – especially looking ahead to next year’s race.

This year I ran 5:11, another bronze medal, but the training was not quite what I wanted and that ‘little’ Constantia Nek put some brakes on me! Otherwise I was fine. Next year is going to be a special 32nd for me, because the Oceans is on my birthday, the 23rd of April, so I’m going to put in a special effort to get another Chet Sainsbury medal to go with the one I got last year.

It’s Cape Town, the mountain, camaraderie, running friends… that’s what keeps me coming back year after year. I started running Oceans in 1979, when we used to end at Celtic Harriers at Brookside, but it’s gotten bigger and bigger over the years and that’s why UCT is the perfect venue for it now. There are so many other things going on nowadays, like cycling and triathlon, so 8 000-plus people in the ultra and over 10 000 in the half is great.

Sure the old days and a smaller event were great, but you’ve got to move with the times, and that’s why I think adding the half marathon was such a great idea. It certainly brings a spirit to Cape Town and to this entire week of Oceans.

There were no problems with his 13th Oceans ultra, but Lionel still says it will be his last one – because he reckons it’s time to step down to the half marathon.

I put in a lot of training for this one and thought I could maybe do a sub-5:00, but when I got to the marathon mark in 3:44, I realised I wasn’t quick enough over the hills. So I took it easy for the last 14km. I still ran a 5:17, which is faster than I did ten years ago. It was a good run on a beautiful day, and the weather was perfect. Over Chappies there was even a nice sea breeze to cool us down, but it got a little bit warm towards the end, although I guess it was more my legs that were tired than the weather.

The beauty of this race brings me back each year, but I’ll be 60 next year and I think I will start doing the half marathon instead. I wanted to do this year’s race as my last big one in my 50s, but when I turn 60 I think I must start acting my age! Even if I didn’t run I’d still come here, because Two Oceans is just such a special race. The beauty, the surroundings, the people, the organisation, it is just a fantastic event. You can’t live in Cape Town and not be part of Two Oceans.