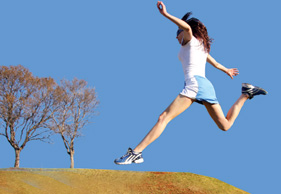 They are the cause of many heated fashion debates among female athletes and were everywhere at the recent Two Oceans Marathon. Like it or not, running skirts are the new craze among female runners. Internationally they have already taken off, and judging by the amount of female athletes wearing them these days, they are well on their way to becoming the newest trend in female athletic gear. – BY MICHELLE PIETERS

Most female athletes know the feeling of shorts that creep and chafe. Not only do they make you uncomfortable but they also look unsightly!

A new trend in running gear, running skirts, has taken off in South Africa; some running clubs have already caught on to the trend and have designed the skirts in their club colours, while independent companies have started designing their own versions of these stylish additions to the world of sport.

One such Johannesburg-based company is Sporty Skirts Revolution. The company was started by Rachel Jesson, an experienced runner and business entrepreneur. Rachel’s idea for the skirts arose on a jog after one too many fights with her running gear. She launched Sporty Skirts Revolution in April this year after working on this project for nearly two years. “We feel that when you know you look fantastic and you’re comfortable – you will perform better,” says Rachel.

The skirts and other products offered in the range are all made locally with imported fabrics. The fabrics are ultra breathable and fast drying, and possess excellent moisture management properties, which keep moisture away from the body. The fabric is lightweight, soft and provides comfort and freedom of movement.

The skirts have built-in shorts that are designed with no elastic and a longer than normal gusset to accommodate the body’s natural stretch and rotational movements when participating in sport. They have a looser fit than regular cycling shorts, which eliminates any further unnecessary pressing on the skin, so any dimples remain under the skin or tucked away under the shorts!

Sporty Skirts Revolution offers three skirt designs; the first is designed to fit all shapes and sizes. The second is more specific to women whose waist to hip ratio dimensions are relatively equal. And the third design is made in a way that makes your outline appear smaller. It is also constructed in a slightly tighter and more body hugging way than the other two styles.

Running skirts might not be for everybody, but they certainly are a breath of fresh air in the female running gear market.