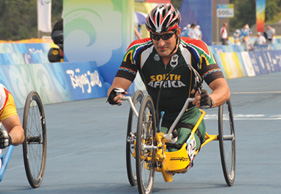 If Bruce Fordyce is the undisputed Comrades King after winning the race nine times, then South Africa has a new ‘royal’ following Ernst van Dyk’s record-breaking Boston win in April. – BY SEAN FALCONER

Between 1990 and 2000, Irish wheelchair racer Jean Driscoll won Boston eight times, which made her the most decorated winner in the world’s oldest standard marathon. That record no longer stands, though, because in this year’s 114th Boston Marathon, Ernst van Dyk went one better. But he almost missed out on his ninth victory. First, he only just made it to the USA before all northern hemisphere flights were cancelled due to the volcanic eruption in Iceland, and then he had to race harder than ever for the win.

“If you can get away in the beginning at Boston, they can’t see you anymore and start thinking of second, so I gave it everything I had, but the guys worked together and at 20km they got me,” says Ernst. With 7km to go, he found himself trailing great friend Krige Schabort by almost a minute. “I put my head down and sprinted as hard as I could, and with 2km to go, I caught him. With 450m to go I went around him and started my sprint.”

Ernst won in 1:26:53, with Krige, a two-time Paralympic marathon podium finisher for South Africa, coming in four seconds adrift for his seventh Boston runner-up position. Ernst says it was the hardest race of his life. “I don’t know of anybody in my sport that’s ever come back from a minute down with 7km to go.”

LONDON DEFLATION
Six days later, having only just made it to the UK once flights were resumed, Ernst was forced to settle for sixth in the London Marathon. “They’ve had a really hard winter and the roads have been shredded by ice, which made it an expensive day for tyres – 32 of the 40 wheelchairs got flats! My front tyre went after just 5km. We can change a back tyre in three minutes, but you have to get out of the chair to change the front, so while it slows you down, you just keep going.”

MISTER INCREDIBLE
Ernst has represented South Africa at five Paralympics since 1992, winning one gold, two silver and three bronze medals. He also won double gold in the 2007 Hand-Cycling World Champs, and brought home silver and bronze in 2009. He was the first athlete to break 1:20 for the marathon and currently holds the world record of 1:18:27 (Boston, 2004). He’s also won the New York, Los Angeles, Paris and Seoul Marathons, amongst others, and was the 2006 Laureus Sport Star of the Year.

He was born with under-developed lower legs, which were later amputated below the knees and today he wears prosthetic legs. The 37 year old lives in Paarl with his wife and 19-month-old daughter, and works as Head of Events at the Stellenbosch University Sport Performance Institute. He also runs his own company, Enabled Sports, catering for the gear needs of disabled athletes.

Ernst says he’d love to do the Ironman, but his SASCOC contract doesn’t allow any high-risk sports prior to the London 2012 Paralympics. “I don’t mind, though, because we finally have government support on par with overseas countries and I’m well looked after.” Therefore, from June until August he will focus on hand-cycling, which he says is great for upper body strength work, building up to the World Champs in Canada. “After that I’ll go back to the chair for the Chicago and New York Marathons, and next year I’ll follow the same programme, which will include going for a tenth win in Boston.”

Go to www.modernathlete.co.za and click on the video section to see more of Ernst.