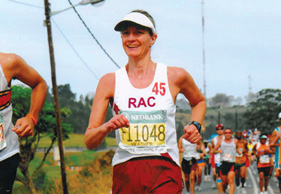 Many runners have been affected by breast cancer and have continued to persevere in their fight against this disease by taking on running challenges that display their courageous spirit. This year the upbeat PinkDrive campaign for breast cancer awareness is an official charity at Comrades 2010. Heather Larder, a breast cancer survivor who will be running for the PinkDrive in Comrades 2010, shares her story with Modern Athlete.

WHY ME?
At the end of August 2001, on my way home after running the club’s time trial, I was involved in a hijacking. The bullet caught me under my right arm. Fortunately it went around the rib cage to my back without doing any major damage. After two nights in hospital, surgery and one session with a trauma counsellor, I was back at home wondering what life had thrown at me.

Five weeks later I felt a lump under my right arm. I was prescribed a course of antibiotics, since at the time it was thought to be an infection in the lymph glands after the trauma of the bullet. Four weeks later the lump was still there and I was sent for a mammogram. The mammogram revealed nothing abnormal but the ultrasound showed several grey shadows under the arm. The biopsy revealed that it was definitely cancer in the lymph glands.

In October 2001 I had a segmental mastectomy. Fortunately it is one of the easier cancers to treat and I responded well to chemotherapy and radiation.

RUNNING KEPT ME GOING
Throughout my treatments I continued to run and go to the gym. This cancer was not meant to be in my body and I wanted to do whatever it took to banish it. The year 2003 saw me on a mission. I ran a sub-four hour marathon for the first time followed by a PB at Comrades that year. I had proved that cancer can be beaten!

Running played a huge part in my acceptance and coping with cancer; every run was a fight against the cancer. Running has become part of my soul. I run because I can and every run is an achievement, however long or short, good or bad.

Breast cancer knows no bounds; every woman is at risk, even the fit and healthy as I found out. I am supporting the PinkDrive at this year’s Comrades because awareness and early detection are the keys to successfully fighting breast cancer.

COMRADES CHALLENGE
The PinkDrive, with Reebok as its main sporting sponsor, has challenged many of this year’s Comrades runners to champion their cause to action by fundraising and donating to the amazing work that this charity is involved in. In return, the PinkDrive will provide each runner with a hamper containing various pink items that runners can wear during the race, essentially making them ambassadors for the PinkDrive and breast cancer awareness. Cause Marketing Fundraisers (CMF), a non-profit organisation driving education, fundraising and awareness about breast cancer, has spent the last two years raising just over R8 million from corporate South Africa to build their first two mobile breast cancer units. These units go out into underprivileged communities and clinics performing free mammograms and educating women about the importance of early detection of tumours.

The top five stories will receive a limited edition Jenna Clifford Breast Cancer Awareness ‘shoe with a soul’ charm (see image below in Great Gear for Girls) specially designed in celebration of the Comrades Marathon and valued at R140.

Log onto the Modern Athlete website at www.modernathlete.co.za and submit your story with your photograph. Competition closes on 31 July.

PINKDRIVE NEEDS YOUR FUNDRAISING IDEAS!
CMF are also looking for exciting fundraising ideas to keep their two pink trucks on the road. Please send your ideas to cecile@causemarketing.co.za with your name, e-mail address and contact number.

The reader with the best idea will stand a chance to win an amazing two night stay for two at the spectacular Springbok Lodge – a privately-owned game lodge located within the Big Five, Nambiti Private Game Reserve, situated 25km from Ladysmith. The value of the prize is R6 000 and includes: accommodation, brunch, high tea and dinner, hot beverages and snacks and two game drives daily. Competition closes on 31 July and winners will be notified telephonically.

Great Gear for Girls
THIS MONTH’S PICK: SHOE WITH A SOUL CHARM

If you love running, you will adore this! Well-known jewellery designer Jenna Clifford has designed a limited edition ‘shoe with a soul’ charm in celebration of the Comrades Marathon.

You can wear it as a charm on your bracelet, on a key holder or on a chain around your neck. Not only will you look cool, you will have a lasting memory from Comrades 2010. The shoe charm costs R140. It will be available at the Comrades Expo or you can order it from Cecile at cecile@causemarketing.co.za.