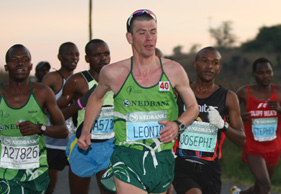 Records are made to be broken and he won’t feel bad if his record for the Comrades ‘down’ run is broken this year. The question is: will it happen in the 85th running of the Comrades? It is highly unlikely, speculates Leonid Shvetsov, Comrades record holder of the ‘up’ and ‘down’ races. Modern Athlete spoke to Leonid about Comrades 2010, his life in Russia and whether we can expect him back on African soil anytime soon. – BY MICHELLE PIETERS

Leonid Shvetsov has definitely left his mark on the Comrades Marathon. In 2007 he smashed Bruce Fordyce’s long standing down record of 21 years, crossing the finish line in 5:20:41. The tall Russian followed it up in 2008 when he beat Vladimir Kotov’s eight-year-old ‘up’ record, coming home in 5:24:47. On top of that, Shvetsov was the Russian marathon record holder for ten years before an athlete, coincidentally one that he coached, broke the record. “I was by no means sad! Records are meant to be broken, sooner or later. It was great that my record was broken by a runner that I coached,” says Leonid, who retired from competitive running last year.

BREAKING THE COMRADES RECORD
“It took a tremendous effort to break both records.” Leonid explains. Friends asked Leonid how he managed to break the ‘down’ run record by such a large margin (over three minutes). “I told them running is not high jump or pole vault, where you can add just 1cm each time! Comrades is extremely unpredictable, and even when I knew I had time to spare on my way to breaking the record, I still kept a fast pace.”

IS MUZHINGI THE MAN?
Is 33-year-old Zimbabwean Stephen Muzhingi, winner of the 2009 Comrades in the second fastest time (5:23:10) in history, the man to break Leonid’s record?

“So far only Stephen has come close to my time. He also beat the old record set by the great Bruce Fordyce. But with all respect to Stephen, he still has almost three minutes to cut from his time! Last year he struggled a lot towards the end of the race. I think it’s unlikely the record will be broken soon.”

Stephen definitely has the most potential. “The hardest part for Stephen will be if he is on his own for a prolonged part of the race (like I was in 2007). That adds another difficulty. Last year I tried to go for the record again, but when I was on my own, I started to lose ground and in the end lost the race. No matter what results were achieved prior to Comrades, the race on the day will show who is who. One thing is for sure, the mental and physical both count equally on the day,” says Leonid, who has completed 44 marathons and run in two Olympic Games.

BEHIND THE SCENES
Leonid is a family man who loves being with his wife and children. He owns a car service and repair workshop, which he became involved in just before his wedding. “I acquired a Soviet-made limousine from 1954 and decided to turn it into our wedding car!” This was the start of his interest in repairing cars. Today the business is flourishing.

Leonid is also involved in internet coaching for high-profile athletes. Many would ask how effective it is to coach elite runners over the internet. “I agree that it takes a coach’s personal attention to provide a quality training programme. But my experience showed that if a person is highly motivated and organised, his or her cooperation with me can be productive. I have worked with a few world-class athletes who performed well. Amongst them are Lidya Grigoriyeva (winner of LA, Boston and Chicago Marathons) and Irina Timofeyeva (winner of the Hamburg and Shanghai Marathons and seventh place finisher at the Beijing Olympics).”

He currently coaches five runners in Russia who could be considered world class. The men’s PB marathon times range from 2:07 to 2:11 and the women’s from 2:28 to 2:32.

These days he does not take training too seriously. In fact, when the snow began to fall in Russia in December, he did not run for four months! “I did cross-country (some call it Nordic) skiing once or twice a week, partly because of my three kids. They want to be with ‘Daddy’ every minute. I can’t say I miss hard training, but I do sometimes still run at a good pace, though that pace is still not even close to what my competitive speed used to be!”

COMRADES ADVICE
• Run your own race.
• Novices should never give all they have at any stage of the race. “The easiest two of my five Comrades were the ones where I set records. I was well-prepared, but I also only started struggling in the last 10km. The first half of both races felt like an easy training run! I was literally jogging, and that’s how anyone should feel in order to run an even pace.”
• No matter who you are, the distance will always get to you at some stage. “To me the hardest part was the last 7-8km. I tried to get over it by telling myself that everyone’s hurting, but maybe I am suffering the least!”
• Approach the ‘down’ run differently. Run the downhills in the first half at a more relaxed pace. “If you overload your legs (especially your quads) in the first half, the last 25-30km will be torture.”
• The most important thing is to think positive! “That is not as easy as it sounds. Practice being positive prior to the race.”

FUTURE PLANS
“My number one goal is to live in a happy and healthy family, raise good kids and be friendly with the world around me! I also want to concentrate on my coaching.”

Leonid says it is very possible that he will return to Comrades one day. “Very few races in the world are supported and watched like the Comrades. I would love to find myself in a Comrades atmosphere at least once more time.”