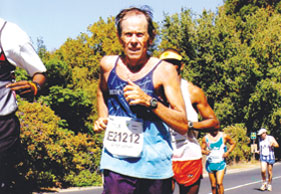 Between stressful jobs and trying to spend quality time with the family, exercise is often the first thing that falls to the bottom of our list. In a series of features on how to balance a busy career with running, Modern Athlete speaks to various high-powered professionals to find out how they manage to fit sport into their hectic schedules. This month we chat to Anton Kruger, Managing Director of the Rand Airports Management Company. – By MICHELLE PIETERS

Who are the most interesting people you have met?
In local government it was Willem Cruywagen, the former Administrator of Transvaal. In my current position I get to meet many passionate pilots. If I had to single out one it would be Captain Scully Levin, an ex-captain of the South African Airways.

What motivated you to start running?
When I was Town Clerk of Bedfordview, the Council approached me to sponsor them to run the Liberty Life Relay. I agreed and they asked me to run the last leg, which was about 2km. I only had two weeks to train, but today I am still running!

How do you fit running into your busy life?
I get up at 4:15 five mornings a week.

Who do you train with?
With runners from the Bedfordview Country Club.

Have you run any big races?
Yes. I have done two Comrades Marathons, one Two Oceans Ultra and many other marathons and ultras.

What do you see as the biggest obstacle to your running?
I started too late in life. I could have achieved much more if I’d started earlier.

Has running influenced your career and work ethic?
Yes. I believe it has made me more committed, disciplined and goal driven in my career.

What is the best advice you have been given with regards to running?
There is a direct relation between the time you spend training and the result you achieve.

And the worst advice?
To eat steak the night before a big race!

Proudest moment in running and in business?
In running it was when I completed my first Comrades. In business it was when I was appointed Chief Executive Officer of Greater Germiston Council, the then fifth-biggest city in South Africa.

Most embarrassing moment in running? And in business?
In running it happened one morning when I tripped on a paving brick and fell. I got up very quickly and carried on running. All the runners around me had something to say! I don’t recall embarrassing moments
in business, but it is embarrassing to phone a director of a company to ask him to pay his overdue accounts!

The thing I love most about running is…
You compete only with yourself and every time you achieve a goal you set for yourself, it leaves you with a great feeling of achievement.

After a run the first thing I like to do is…
Take a shower!

My greatest ambition is to complete…
Another Two Oceans Ultra before I retire from running races.

I don’t enjoy being beaten by …
People who I know are training less than me.

Who are your running role models?
Bruce Fordyce and Nick Bester.

What is your favourite place to run?
On the boardwalk on the beachfront at Ballito.

What do you think about when you run?
I think about all the issues in business that I need to address and resolve.

I could not go running without my…
Running watch.

What is your favourite meal after a big race?
A well-prepared fillet or rump steak with chips.

What would you say to someone who says that they don’t have the time to start running?
It is a bad excuse! Start organising your life and commit.

Favourite Quote
“If you believe in yourself, have dedication and pride and never quit, you’ll be a winner. The price of victory is high, but so are the rewards.” (Paul Bryant).

Life motto?
Always give your best and enjoy the rewards.