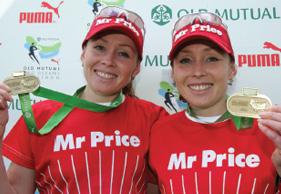 They were the champions of Comrades 2009, winning one of the most gruelling ultra distance events in the world. Most of us look at them in awe and often wonder how it’s possible to run at such speeds over such a distance! In the women’s race the well-known and loved Russian twins have dominated on African soil, taking Comrades glory six times between them. And though anything can happen on the day, most expect them to win again this year. The only question the running community is still asking is, which twin will enter the stadium first? In the men’s race a Zimbabwean ran to his first Comrades victory last year, setting the second fastest Comrades time in history. Many predict a second win from him this year. Modern Athlete has the inside scoop on what makes the 2009 champions, Elena and Olesya Nurgalieva and Stephen Muzhingi, tick. – BY MICHELLE PIETERS

Elena and Olesya Nurgalieva have won their way into the hearts of many South Africans. With their trademark running style, red bobbing ponytails and friendly smiles, they have become something of a Comrades tradition. The limelight of it all has certainly not gotten to their heads. Anyone who has ever met them will tell you the twins are not only super fast, but also super cool, fun to be with and very humble. They can often be seen strolling around at the Comrades Expo enjoying the sights with the thousands of other ‘normal’ runners. They are always happy to stop for a chat (though their English is limited) and a photo opportunity.

Elena and Olesya were born on 9 January 1976 in Bolshoi, about 300km outside in the West Ural. For the first three years of their lives they lived with their parents in their grandmother’s house before moving to a two-bedroom apartment. At the age of ten, the family moved to a farm where their parents still live today. They have an orchard and keep sheep, pigs, geese and cows, as well as the dogs and cats the family all loves.

The twins have more than just sporting talent; they excelled at both primary and high school. After school they attended the from 1993-1998, where they studied towards a biology degree. And on top of that, they studied part time towards a physical education degree (2000-2003).

The twins’ sporting career started at the tender age of 12 when their father became their cross-country skiing coach. “Every day after our school we played sport and in winter we participated in local competitions on weekends. We often won!”

Vying for the position of second on their list of beloved sports were volleyball and basketball, which they played twice a week after school, in addition to their skiing lessons. “I was captain of our school team and we also participated in local competitions. We were very energetic girls,” says Olesya.

They continued cross-country skiing throughout university, though due to their demanding studies they could not spend as much time on this activity as they would have liked. In summer they ran to stay fit. “We did not really have money to buy good ski equipment. If you wanted good results in cross-country skiing, you needed good-quality, warm clothes, boots, many pairs of skis and ski poles. I beat my biggest competitor in running races in summer, but not in winter because she had good skis,” Olesya explains.

In September 1998, after a running race, they met their running coach, Sergei Popov and his wife, Elena. “He offered to coach us and we agreed.” Unfortunately the Popov couple had family problems and the twins were left to train on their own for two years. They resumed their training with Sergei between January 2002 and 2006.

Their first Comrades came in 2003, and Elena walked away with victory in a time of 6:07:47 followed by her sister in 6:12:08. “That was the first time we realised we were good at ultra marathons!”

The twins have dominated the race over the last six years. Elena has won Comrades four times and has placed second twice. Olesya has won twice and placed second three times.

The sisters have repeatedly said there is no jealousy between them and no, they do not plan beforehand who is going to win the race! Whoever is strongest on the day takes the crown!

The sisters love and Comrades, but prefer to . After every Two Oceans race they are out and about sightseeing. They love , the Waterfront and going to the beach! And don’t think Comrades exhausts them to such an extent that they go to bed early. They usually party the night away! When not running they love going to the movies and spending time with family on the farm in .

Can they make Comrades 2010 their own again? Most people would bet their Comrades medals on it!

Last year, on his way to Comrades victory (5:23:10), 33-year-old Zimbabwean Stephen Muzhingi thought of only one thing: a Nissan bakkie that was promised to him by his coach Cliff Chinnasamy, also known as ‘The Terminator!’

This motivated him more than the prize money, say sources close to Stephen. Also, he belonged to a relatively small club (Formula 1 Athletic Club) and wanted to make them proud, especially after some bigger clubs gave him the cold shoulder.

Stephen has made clear that not only does he want to win Comrades this year, but he would like to break Leonid Shvetsov’s ‘down’ record of 5:20:49. “I think the record can be broken and every competitive athlete wants to break it. So I would be lying if I said I wasn’t going for it. Let’s see what happens!”

Stephen was born on 17 October 1980 in , and grew up in a rural area called Chivhu. He stayed with his uncle, Esau Magwaza, one of ’s top long distance runners. When he went to secondary school he stayed with the school headmaster, Mr Mlanga. “I was a good 5000m and 3000m runner at school and later became a well-known distance runner because I was also running more than 50km while still at school.”

After school Stephen joined the Airforce of Zimbabwe Athletics Club. Two years later he joined the ZPR Support Unit Athletic Club for which his uncle ran. In this time Stephen worked as a barber. “When my uncle died, I thought twice about life. My life was hard. In 2004 I came to because I heard about the Comrades Marathon. My very first Comrades was tough because I was a novice. When I ran Comrades in 2005 and finished in 6:40 my coach realised that I could improve. Running changed my life,” says Stephen, who is described by most of his friends and those who have worked with him as humble, motivated and easygoing.

Stephen is happy with his training and fitness level this year. He used Two Oceans as a tester to compare himself to other Comrades competitors. “I trained six days a week, with various sessions including speed work, speed endurance, strength and distance.”

Has he trained any differently this year? “That should be a secret!” he says. “My coach didn’t change much, but we included more quality sessions. Last year we trained in a certain way as we had different objectives. The aim was to win Comrades, and obviously with Leonid Shvetsov being in the race we had to plan and train to beat him. Now I am the defending champion so we had to change our training slightly to defend the title. I feel good and probably stronger than last year. Anything is possible on the day and all I can hope for and say is that I will do my best to achieve the best possible result.”

When asked who his greatest competitors are this year, Stephen chuckles, “All 23 000!” He adds that runners such as Fusi Nhlapo, Prodigal Khumalo, Bongomusa Mthembu and Marko Mambo are the ones to keep an eye on.

He finds that the first half of Comrades is always the hardest. “Every time I run the down run, it takes time to get into the race. Last year I ran 2:43 for the first half and ran the second half a lot faster!” He prefers the up run and says the down run is much harder as your body takes a much bigger pounding. Your feet hit the road harder as you go down Fields Hill.

ADVICE FROM THE MASTER

Stephen advises novices to use their first Comrades to see what it is all about. It is also a good test to see what they could be capable of in their second Comrades. Most importantly novices should enjoy the race.

“Experienced runners know what they need to do. Each time you run Comrades try and better your time, but don’t overdo it on race day. Rather start slower and keep some energy and strength for the second half of the race,” Stephen explains.

And the most important things? Everyone should have fun, keep hydrated and run within themselves. No one should run at a faster pace than they are used to. “Remember you can’t win the race in the first half, but you can lose it in the first half.”

SIGHTS SET ON THE GOLD

Last year he visualized a bakkie on his way to victory. This year he is running to defend his title and for pride. “This year I want to show people that I am not a ‘one hit wonder’. And although I run for a small club, I want to prove that you don’t have to run for a big professional club to be the best.”

Another motivation is his wife and child who will be waiting at the finish this year. “I want to make them proud and want them to experience the day with me. My ‘extended’ family will also be there. They are my team mates, who I live with, and my coach who has always believed in me and treats me as if I am part of his family.”

Stephen would love to be involved in coaching one day when his running career comes to a close. But for now he can’t wait to get to the start line of Comrades 2010. And what is he most looking forward to on the day? Like all of us: the finish!