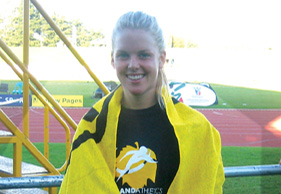 Dominique Scott is destined for success; legendary track star Johan Fourie believes she will run amongst the world’s best at the 2016 Olympic Games. On top of that she comes from a family with sporting genes: her mom, Renee, has three gold Comrades medals to her name and sister, Natasha, is a Western Province hockey and water polo player. More importantly, Dominique is incredibly motivated, with a talent and a passion for running that goes far beyond her years.

FROM CHILD STAR TO TEENAGE CHAMPION
As a seven year old, Dominique would tag along with her teacher mom who coached cross-country. “My mom suggested I run because I was so bored waiting for her. I started jogging cross-country races in the U9 section and finished 55th in my first race as a six year old!”

Finishing amongst the back markers motivated Dominique to improve. “I started training and from 2003 to 2005 made the WP cross-country team.” Her talent is not limited to running; she was also awarded WP colours for hockey and water polo, and SA colours for biathlon and triathlon. Dominique won the All African Championships in her age group in 2006 in Zimbabwe and again in 2007 in Mauritius.

When Dominique, a prefect at Rhenish Girls’ High School in Stellenbosch, started excelling at local track events, her parents decided she needed a coach. Driving her from her hometown in Constantia to Stellenbosch for coaching sessions was time consuming and in 2007, Dominique changed schools. She used to attend Herschel Girls School where her mom is a teacher. “Initially it was a huge adjustment because I come from a very close family. I would never turn back though. I see it as a sacrifice one needs to make to get to the top.”

COACH JOHAN FOURIE
“Since training with Johan my athletics has taken off! I love the group I train with. Johan and his wife, Marinda, are almost like a second family to me. They want us to love athletics; to them excelling is just a bonus.”

Dominique runs 8km six mornings a week, alternating between jogging and drill sessions. She meets up with Johan and the rest of his training group Monday to Thursday evenings. They train on the track three times a week and do an additional 10km run in the Stellenbosch mountains. Weekends are reserved for longer runs of between 15 and 18km. When she’s not running, she concentrates on stabilising exercises in the gym. “I don’t want to race long distances. Track is my first love. When I run on the track it feels like I’m flying!”

TEENAGE DREAMS
Dominique admits to not leading a ‘normal teenage life,’ but loves her sport. “I really don’t have any spare time to miss teenage things!” Her motivation comes from reaping the rewards when she achieves at events. “When I train, I focus on my future dream: to go to the Olympics in 2016!”

After school she plans to study part time overseas while running competitively. “I would love to train full time and compete in the world athletic circuit in Europe.” Dominique’s advice to young athletes is to live each day to the fullest. “Each day of training and each competition, no matter how big or small is a stepping stone towards a bigger goal. Nothing can be achieved without hard work.”