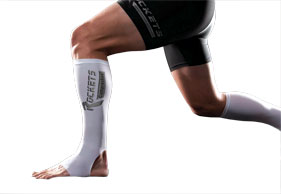 They are rapidly becoming the ‘In Thing’ in running, but there is still much confusion in the running community as to exactly what compression socks do – or how and when to use them. Modern Athlete delved into the sock drawer to find out more. – BY SEAN FALCONER

Go watch a road race these days and you’ll see a fair number of athletes wearing knee-length, tight-fitting socks. They admittedly look a bit strange amongst all the short socks that the majority of runners use, but wearing these compression socks can really benefit your running. That’s why women’s world marathon
record holder Paula Radcliffe wears them when she trains and competes, as does South Africa’s Olympic silver medal long-jumper Khotso Mokoena.

This recovery angle is now the focus of the groundbreaking doctoral research being done at Stellenbosch University by sport scientist Karen Welman. She is the first researcher to investigate the effects of compression socks in distance running further than 10km, and this included outfitting a large test group of runners with socks in the recent Old Mutual Two Oceans Marathon. “Nobody has done compression research in events before,” she says. “Also, most previous studies focused on sprinting and team sports, and the test subjects were often younger athletes that generally recover quicker. Since I’m focusing on recovery, I’m looking closely at results in the 40-plus age group.”

YOUR SECOND HEART
To fully understand how compression socks work, you need to understand that your calves are, in effect, your second heart, as they are the ‘engine’ of the body’s venus system. The heart pumps oxygenated blood that is rich in nutrients (including carbohydrates) to the muscles, which use the nutrients as an energy supply, in turn producing lactate, an acid that contributes to muscle fatigue. The venus system, which is automatically activated when the calf muscles work, then pumps the deoxygenated blood back to the heart to be reoxygenated and cleaned of the lactate, and it normally takes about an hour for all the lactate to be cleared from a muscle.

The faster the lactate can be cleared, the faster the muscles will recover, and that’s why compression socks work so well. They are graded in compression, with the tightest fit around the lower calf and ankle, and easing in tightness as the sock moves up the leg, to stimulate the blood flow back to the heart by squeezing the blood upwards. The added bonus of the socks is that they provide great support for the calves, thus greatly reducing the vibration that causes micro-tears that contribute to muscle soreness and fatigue.

Besides the immediate benefits of reduced muscle damage and faster recovery time, there are also long-term benefits: Years of running result in wear and tear on our muscles, so every bit of extra protection now, has the potential to reduce the overall accumulated wear and tear on muscles.

WHEN TO USE THEM
Karen says that her research project is trying to ascertain the best way to use the socks. “Just look at some of the elites that use them: Paula Radcliffe runs in them, but Lance Armstrong only wears them after his workouts.”

“We did a study on competitive elite runners and found that those who ran in and wore the socks for three days, only taking them off when sleeping, benefitted in terms of faster recovery time.”

Although she is still collating the Two Oceans study data, she says she can see the same pattern forming as in the controlled lab tests, despite the longer distances run and other factors such as heat and a harder running surface.
However, Karen warns that there are a few do’s and don’ts athletes should be aware of before using compression socks.

If you have any circulatory or vascular problems, speak to a physician before using them. “These socks are usually tested on healthy athletes, so first check how much compression you can handle.”

The length of the sock is important; it should end just below the knee. “Some runners fold the top of the sock over because it is too long, and this doubles the compression on the area under the fold, which is normally on the widest part of the calf. That can turn the top end of the sock into a tourniquet and restrict the blood flow to and from your calf.”

You shouldn’t sleep with anything higher than a CCL1 or 18mm compression (see Making the Grade, below). “When lying flat, there is no gravity working on the calves or the venus system, so blood flow can be restricted by the socks because the smaller blood vessels get squashed.”

You should not have a red line on your legs when you take them off. If you do, the socks are too tight.

MAKING THE GRADE
Compression socks are graded according to the level of compression they provide, from CCL1 to CCL5. “The compression is measured in millimetres of mercury (mmHg), with CCL1 usually in the 6-18mmHg range, and CCL2 from 20-30mmHg. Many of the compression products now available in sports stores fall into the lowest grading, and they are often labelled as either CCL1 or 18mmHg. CCL2 and higher gradings are more commonly found in medical prescription and emergency gear.”

COMING NEXT MONTH
Get the June edition of Modern Athlete for our exclusive review of compression socks available on the South African market, PLUS a handy guide to getting the right fit.