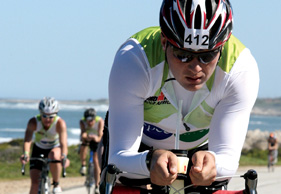 This is not an article about the many hours of training that you require before you attempt a triathlon, or the massive sacrifices that you need to make. This is a story about how, in the space of one minute, nine months ago, my life forever changed course. I am an Ironman.  – BY GREG KOCKOTT

The 8th of July was our centenary old boys’ dinner and after a good evening of dining and drinking, the conversation turned to how two of the guys I was at school with had completed their first Ironman in PE two months prior. Under my breath and with the courage of Rob Roy, I said, “I wouldn’t mind doing something like that one day.” That was the standard non-committal response to most things that were never really going to be done. Or it was until one of my mates said, “I bet you can’t.”

That was the beginning of the most unbelievable journey of my life.

START OF AN INCREDIBLE JOURNEY
The reality of the situation is that if I was Chris (the guy I took the bet with) and I had the opportunity to make a R10K bet with someone who, at that stage, looked like me, I would have taken the bet too. That’s the scary bit. On the 8th of July last year I could not have run 1km. I was 30kg heavier than I am now and was on the verge of some serious health problems. I had no idea what was in store for me in the coming months.

I called up Ironman finisher and friend, Rowan Dancer, told him about my bet and we hit the gym. My days were consumed with early morning spinning classes and running on a treadmill in the evenings. This challenge would bring forth a whole bunch of firsts for me, and before long I started seeing results. I could now make it to the end of my road and back without stopping, and eventually around the 4km time trial track in Sunninghill.

THE REAL DEAL
It was then that the real training started, and we spent the next four months turning ourselves into finely-tuned endurance athletes. Our conversations were consumed with how far we cycled, our run splits and our nutritional plans for race day. Before I knew it January, February and March came and went. We had covered enough distance to get from Johannesburg to Cape Town and back… twice! I was ready.

As the sun rose over Port Elizabeth on the 25th of April the realisation hit me that this was again going to be a day of firsts. Ironman is as much a mental challenge as it is a physical one. It’s once you’ve already been on the road for six hours with the knowledge that you still have another six to go, that the race really starts. No one can prepare you for the long hard conversations you are going to have with yourself 150km into the cycle when your legs are sore and your saddle is perfectly imprinted on your rear end. Take note of the motivational sticker on my bars (a Google search for ‘HTFU’ will do a good job of explaining the concept).

THE RACE WAS ON
We suited up, dropped our swim bags off with loved ones and supporters and stood on the beach looking into the Indian Ocean as the sun rose over Port Elizabeth. The African tribal drumming sent chills down my spine and before we knew it, the cannon sounded. The race was on. The sea was choppy but the swim was good and an hour and 20 minutes later, I found myself out of the water and kitting up for the cycle. The first lap was great, new course, new experience, and new friends. Cycling can be quite a lonely affair as it’s a non-drafting event (you’re not allowed to ride in a bunch). What this really means though is that you are going to be doing a whole lot of soul searching. The second lap was the worst for me. It’s the middle of the race and you undoubtedly will start questioning yourself. The third lap was tough, but awesome. It was the last time I would have to see the cycle course and it meant that I was over the halfway mark.

THE RUN OF MY LIFE
What really makes Ironman such an awesome event is the support you receive, not just from friends and family but also from every single one of the thousands of people lining the course. The run, although definitely the toughest part of the race, was also the most incredible part. I had the run of my life and ended up running my 42.2km with a builder, a farmer and a doctor. I caught Theunis, the doctor, at the start of our third lap, 28km into the race and we just clicked. He was keen to break the 13-hour mark and so was I. We did a great job of spurring each other on. We picked up the pace and ran the last 14km like men possessed. This was also the first time, since the cannon went off, nearly 11 and half hours earlier, that we started thinking about crossing the finish line. We were going to become Ironmen!

BECOMING AN IRONMAN
As we headed past the last water station, only 600m from the finish line, Theunis gestured for me to run ahead. The only advice I can give to you at this stage of the race is to clean yourself up at the last water station. For your supporters and family’s sake, get rid of the last 11 hours of food, sweat, solidified salt and dirt. It’s the last 600m of Ironman that will get me back there next year. There aren’t too many achievements in this world that will give you the high that crossing the finish line at Ironman will. That’s the truth. 12 hours, 43 minutes and 30 seconds after the cannon sounded on the beach with the sun rising in the background, I was an Ironman… and now I’m addicted!

WHAT’S NEXT?
Well, I’m hooked. Not just on Ironman though but on the other extreme adventures this world has to offer too. I spent a lot of my time training with a group of guys who formed part of Lifestruck, a bucket list company, whose mission it is to provide a platform for people to inspire other people by sharing their stories. I’d like to, through Lifestruck, coach a few like-minded individuals through their own Ironman journeys. It’s been inspiring working with such a motivated crew who had a great deal to do with my success. I look forward to giving back to the people who selflessly gave to me.

From a sporting perspective, the next big event for me is Southern Storm in September, a six-day, staged, full service, off-road duathlon featuring mountain biking and trail running that traverses some of the most spectacular natural and wilderness regions in Africa. On day one we run the entire Otter Trail, normally a five-day hike. I can’t wait.